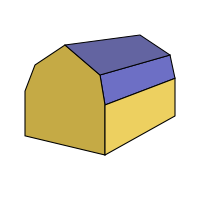 A cross-sectional diagram of a mansard roof, which is a hipped gambrel roof

A gambrel or gambrel roof is a usually symmetrical two-sided roof with two slopes on each side. (The usual architectural term in eighteenth-century England and North America was "Dutch roof".) The upper slope is positioned at a shallow angle, while the lower slope is steep. This design provides the advantages of a sloped roof while maximizing headroom inside the building's upper level and shortening what would otherwise be a tall roof. The name comes from the Medieval Latin word gamba, meaning horse's hock or leg.[1][2] The term gambrel is of American origin,[3] the older, European name being a curb (kerb, kirb) roof.

Europeans historically did not distinguish between a gambrel roof and a mansard roof but called both types a mansard. In the United States, various shapes of gambrel roofs are sometimes called Dutch gambrel or Dutch Colonial gambrel with bell-cast eaves, Swedish, German, English, French, or New England gambrel.

The cross-section of a gambrel roof is similar to that of a mansard roof, but a gambrel has vertical gable ends instead of being hipped at the four corners of the building. A gambrel roof overhangs the façade, whereas a mansard normally does not.

Gambrel is a Norman English word, sometimes spelled gambol such as in the 1774 Boston carpenters' price book (revised 1800). Other spellings include gamerel, gamrel, gambril, gameral, gambering, cambrel, cambering, chambrel[4] referring to a wooden bar used by butchers to hang the carcasses of slaughtered animals.[1] Butcher's gambrels, later made of metal, resembled the two-sloped appearance of a gambrel roof when in use.[5] Gambrel is also a term for the joint in the upper part of a horse's hind leg, the hock.

Know old Cambridge? Hope you do.—
Born there? Don't say so! I was, too.
(Born in a house with a gambrel-roof,—
Standing still, if you must have proof.—
"Gambrel?—Gambrel?"—Let me beg
You'll look at a horse's hinder leg,—
First great angle above the hoof,—
That's the gambrel; hence gambrel-roof.)[6]

An earlier reference from the Dictionary of Americanisms, published in 1848, defines gambrel as "A hipped roof of a house, so called from the resemblance to the hind leg of a horse which by farriers is termed the gambrel."[7] Websters Dictionary also confusingly used the term hip in the definition of this roof.

The term is also used for a single mansard roof in France and Germany. In Dutch the term 'two-sided mansard roof' is used for gambrel roofs.

Origins of the gambrel in North America

Claims to the origin of the gambrel roof form in North America include:

This section contains an unencyclopedic or excessive gallery of images. Please help improve the section by removing excessive or indiscriminate images or by moving relevant images beside adjacent text, in accordance with the Manual of Style on use of images. (January 2021) (Learn how and when to remove this template message)

Look up gambrel in Wiktionary, the free dictionary.