Gamma Rho Lambda (ΓΡΛ) is a social, college-based sorority for lesbian, gay, bisexual, transgender, non-binary, and allied students.[1] Gamma Rho Lambda National Sorority is dedicated to providing a social support system for young college students. Gamma Rho Lambda has been referred to as the first national multicultural lesbian sorority; however they are inclusive of cisgender women, trans women, trans men, and gender variant people of all sexualities and racial identities. As of 2019, GRL consists of 17 active chapters and 3 colonies across 12 states with an active membership (including Alum & Collegians) of over 400.[2] 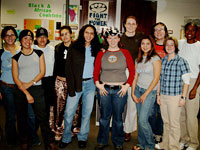 Eleven of the twelve founders of Gamma Rho Lambda

Gamma Rho Lambda, Alpha chapter, was founded in the Fall of 2003 by 12 original members at Arizona State University in Tempe, Arizona.[3] The sorority was initially created because the founding president and members wanted an organization similar to the GBTQ-focused fraternity on campus, Sigma Phi Beta.[4]

In 2005, Gamma Rho Lambda began the daunting task of expanding nationally, as Alpha chapter had been approached by several interested women on other campuses in the United States. Over the course of the next year, Gamma Rho Lambda worked to expand to these campuses, functioning in a national and local capacity at the same time.

University of Missouri became a colony of Gamma Rho Lambda.[6]

In January 2021, Gamma Rho Lambda National Sorority opened its membership to people of any and all gender identities, thereby including cisgender men in their siblinghood.

The provisional chapter at University of Nevada, Reno was inducted as Alpha Delta chapter in February 2021.

The sorority's day-to-day business activities are overseen by the National Governing Council which acts as the board of directors. It was established in 2006, when there were enough alumni members to support a National Council. Since then, Gamma Rho Lambda National Sorority has been working not only on expansion, but also adjusting to the needs of our chapters and members and bettering the community overall through these efforts. Council consists of thirteen elected alumnae who are elected every two years; This includes one President, Ten Vice Presidents and two Alumni at Large Delegates. Additionally, each VP has a committee to assist them in projects. Each chapter and colony has a mentor who assists them in any issues and provides guidance as they develop.

The Lambda symbol was adopted by the New York City's Gay Activists' Alliance in the 1970s during the Stonewall Riots. Since then, the Lambda has spread as a symbol for the gay liberation movement. Because of its history, the Lambda was chosen to be a letter in the sorority's Greek name. The Gamma and Rho symbols were chosen because with the Lambda symbol, they spell GRL ("girl").[13]

Visible symbols in the coat of arms include the Lioness, the Bear, the Unicorn, the Crown of Thorns, the Metal Crown, the Isle of Lesbos symbol with Shaking Hands, the Upside Down Black Triangle, the Eye of Horus, the Hand, the Sword, the Ivy Leaf Vine, the Elephant Tusk, and the Cinquefoil.

The official colors are purple and black.
The official symbol/mascot is the wolf.
The official flower is the sunflower.
The official Motto is: "Truth in tolerance, knowledge through diversity, bonds of unity, strength in trust."
Gamma Rho Lambda has no official jewel or gemstone.