The Mughal emperor Jahangir celebrating Holi with ladies of the zenana. 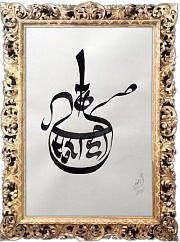 "Surahi" written in Samrup Rachna calligraphy used to write the Hindustani language, the lingua franca of the northern Indian subcontinent.

Ganga–Jamuni Tehzeeb (Hindustani for Ganges–Yamuna Culture), also spelled as Ganga-Jamni Tehzeeb, is the culture of the central plains of northern India,[1][2] especially the doab region of Ganges (Ganga) and Yamuna rivers, that is a syncretic fusion of Hindu cultural elements with Muslim religious elements.[3][4][5][6][7][8]

Ganga-Jamuni tehzeeb, a poetic Awadhi phrase for a distinctive and syncretic Hindu-Muslim culture, is reflected in the fused spiritual connotations, forms, symbols, aesthetics, crafts and weaves, for example Kashmiri Muslim carpet makers feature Durga in their patterns, Muslim sculptors making idols of Durga, and Hindu craftsmen create the Muharram tazia.[9][8][10] This religious syncretism and multi-communitarianism is a result of centuries of interfaith exchange and accommodation among Indian religions (Hinduism, Buddhism, Jainism, Sikhism) and foreign origin religions (Muslim and Christian) where in India communities preserve own cultural and religious identities while facilitating the shared celebration of festivals, customs and traditions.[10] The shared Indian national identity is separated from the personal religious identity where nation and common social good comes first above the personal religion.[10]

Various iconic people of several religions related to the Bhakti movement, a medieval initiative for the revival and recontextualisation of ancient Vedic traditions,[11] are example of this tehzeeb.

Bulleh Shah, Eknath, Tukaram, were some of the prominent contributors of Ganga Jamuni Tehzeeb movement. One of the best examples of syncretic faith is captured in one of Kabir's doha (verse), "some chant Allah, some chant Ram, Kabir is a worshiper of true love and hence reveres both."[1][failed verification]

In Lucknow, one prominent example of this culture is that not only Shias but also Sunni Muslims and Hindus participate, both historically and today, in the mourning and religious customs during the Islamic month of Muharram.[25][26] The Hindu festival of Basant and Persian tradition of Nowruz were also patronized by the Shia rulers of Awadh.[27]

Another is the linguistic traditions of the region. The norms and etiquette Lakhnawi Urdu are said to reflect the cultural commitment to syncretism in the city,[28] while the local idioms of Urdu and Awadhi were used by both Hindu and Muslim writers to create devotional literature, poetry, and music.[29]

Delhi was the one which laid foundations for Ganga-Jamuni tehzeeb which reached its prominence in era of Amir Khusrau. Delhi has also historically been a prime example of the Ganga-Jamuna Tahzeeb; with its iconic Khariboli dialect and being one of the literally centers of the Urdu language, there have been numerous poets such as Amir Khusrow, Mir Taqi Mir, Ghalib, Mohammad Ibrahim Zauq, Daagh Dehlvi, Nida Fazli and many others. Delhi has also contributed to the music of the region, being the birthplace of Qawwali and the Delhi Gharana.

Hyderabad, the capital city of Telangana in south-central part of the India, is also a big example of communal harmony where the local Telugu Hindus and Hyderabadi Muslims live with peace and brotherhood, where Hindu temples serve the dry dates fruits to mosques for Iftar Muslim festival.[30][31]