Overview of Mumbai's geography
This article needs additional citations for verification. Please help improve this article by adding citations to reliable sources. Unsourced material may be challenged and removed.Find sources: "Geography of Mumbai" – news · newspapers · books · scholar · JSTOR (December 2009) (Learn how and when to remove this template message) 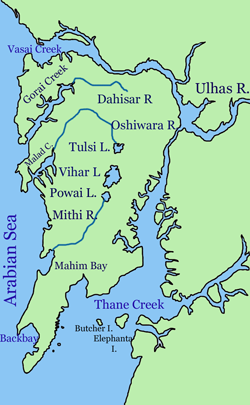 Rivers and lakes of the city. 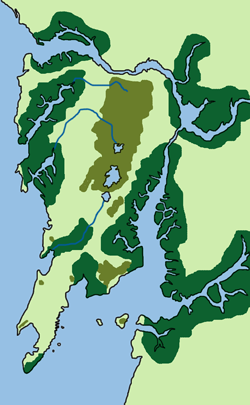 Terrain of the city; dark areas are swampy, medium areas are elevated regions.

The islands of Mumbai in an 1893 map, before Salsette, Trombay, and Dharavi were merged with Mumbai Island to form Greater Mumbai.

Mumbai (Bombay) is India's most populous city with a population of 20 Million. It is located on Salsette Island off the coast of Maharashtra. The original Seven Islands of Bombay were merged by the British in the 18th century, to form one large island.

The original Seven Islands of Mumbai consisted of 22 hills. Most of them were raised to fill in the shallows to connect the islands. The hills still standing today are:

There are three hill ranges with the city limits. The Ghatkopar Hills are present near the station of Ghatkopar. The hill range runs parallel to the Central Railway track and is inhabited by slums. During the monsoon season, landslides are common. The Trombay Hills occupy a large portion of Trombay on the eastern part of the city. The highest hill is about 302 metres (991 ft) above sea level.

The Powai Hills are present north of the city. The Borivali National Park occupies most of the region. The Vihar and Tulsi Lakes are present within the hills. The highest point of the metropolis, at 450 metres (1,480 ft), is located in this region.

There are three lakes in the city. The Vihar Lake and the Tulsi Lake are present within the National Park and supply part of the city's drinking water. The Powai Lake is immediately south of these two. They are located in central Mumbai.

Mahim Bay is the second largest bay in the city. The Mithi River empties into the Mahim Creek which drains into the bay. The border between the city and its suburbs bisects the bay. To the north lies Bandra and to the south, Mahim.

Mumbai has numerous creeks with close to 71 km2 of creeks and mangroves along its coastline.[1] The mangroves adjoin broad tidal mudflats adjacent to the city.[2] The Vasai Creek to the north and Thane Creek to the east separates Salsette Island from the mainland. Within the city the Malad (or Marve) Creek and the Gorai (or Manori) Creek inundate the suburban region. The Mahim Creek forms the border between the two districts. There are also the Mahul Creek and the Mahim Creek. Although the islands were merged in the 18th century, islands still dot Thane Creek. Elephanta Island, Butcher Island, Oyster Rock, Cross Island and Middle Ground are scattered across the Creek. The latter three are uninhabited islets owned by the Indian Navy.