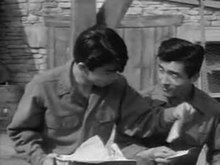 Go for Broke! is a 1951 black-and-white war film directed by Robert Pirosh,[2] produced by Dore Schary and starring Van Johnson and six veterans of the 442nd Regimental Combat Team. The film co-stars Henry Nakamura, Warner Anderson, and Don Haggerty in its large cast.

The film dramatizes the real-life story of the 442nd, which was composed of Nisei (second-generation Americans born of Japanese parents) soldiers.[3]

Fighting in the European theater during World War II, this unit became the most heavily decorated unit for its size and length of service in the history of the United States Army, as well as one of the units with the highest casualty rates.[4] This film is a Hollywood rarity for its era in that it features Asian Americans in a positive light, highlighting the wartime efforts of Japanese Americans on behalf of their country even while that same country confined their families in camps.

As with his earlier film script for Battleground, in which Van Johnson also starred, writer-director Robert Pirosh[2] focuses on the average squad member, mixing humor with pathos, while accurately detailing equipment and tactics used by American infantry in World War II.[5] The contrast of reality versus public relations, the hardships of field life on the line, and the reality of high casualty rates are accurately portrayed with a minimum of heroics.

In 1979, the film entered the public domain in the United States because Metro-Goldwyn-Mayer failed to renew its copyright registration in the 28th year after publication.[6]

In 1943 at Camp Shelby, Mississippi, the newly commissioned Lt. Michael Grayson (Johnson) reports for duty to train the 442nd, a unit established on the US mainland and composed of Nisei. His expectation was to return to the U.S. 36th Infantry Division, a Texas National Guard unit, which he had served as an enlisted soldier. He has to come to terms with a group of people that he sees as Japanese, the enemy, rather than Americans. Grayson runs his platoon rather insisting on strict observance of military regulations.

He learns that "Go for broke" is a pidgin phrase used in Hawaii meaning to gamble everything, to "shoot the works"—to risk "going broke" or bankruptcy.[5] Grayson comes to learn the meaning of the frequently exclaimed Baka tare, which, loosely translates to mean "very stupid."

There is only one brief discussion of the internment camps from which some[7] of the men have come, but throughout the film there are references to the camps. There are also a few brief references to the distinctions between the Nisei from Hawaii and the mainland.[8] When the islanders who formed 2/3 of the outfit [9] and the mainlanders first met in Camp Shelby, their very different cultures and expectations were bound to clash. The Hawaiians, products of the plantation system, enjoyed a sense of group solidarity—even, as the largest minority group in the islands, a sense of ethnic superiority. The mainlanders, by contrast, were used to life as a tiny and—after the 'relocation' -- legally oppressed minority.))</ref> While Buta-heads (the phrase later devolved to "Buddha-Heads") are a key part of the Hawaiian economy and Hawaiian society, Katonks were largely distrusted and disliked by their neighbors.[citation needed]

Arriving in Italy, the unit is joined by the 100th Battalion, a Nisei unit formed in Hawaii before the 442nd. The troops of the 100th are seasoned veterans and the new arrivals look to them for advice. On the march to the front lines, Grayson gets left behind when fraternizing with a signorina, but he is not found by the colonel because his platoon has covered for him during an inspection of their positions.

By the actions by the 442nd in Italy and France, Grayson finds reason to replace his bigotry with respect toward them. His transfer to the 36th, as a liaison—over his objections—comes through when the 442nd is attached to the 36th. As he has misjudged the Nisei, they have misjudged him.[5] The Nisei learn that he has defended them against bigotry, even getting into a fistfight with an old friend from the 36th had insulted them.

The 36th is surrounded by the German army and the "Buddha-heads'" rescue "them". On their return home, they are the awarded the distinction of the eighth Presidential Unit Citation.[10]

‡These actors were actual veterans of the 442nd.

The screenplay by Robert Pirosh was nominated for an Academy Award in 1951.[16]