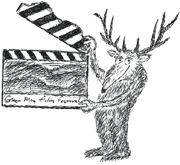 The first Green Mountain Film Festival took place in Montpelier, Vermont in 1997. In March 1999, a second festival was held and it has been an annual March event ever since. In 2010 the festival was extended to include a series of satellite screenings in St. Johnsbury, Vermont. In 2018 the festival will also host screenings in Essex Junction, VT at the Essex Cinema.

The program focuses on new work from around the world together with a few classic films. Around half the films shown are documentaries. There are also screenings of shorts and student films. Screenings are often followed by informal discussions often involving the filmmakers themselves. The festival also features special appearances by established film critics and filmmakers. Past guests have included critics Kenneth Turan, Molly Haskell, Phillip Lopate, David Thomson, Gerald Peary, and Matthew Hays. Filmmakers have included the screenwriter and director, Robin Swicord, actor/director Giancarlo Esposito, actor Michael Murphy, producer Christine Vachon, and documentary makers Albert Maysles, Les Blank and Ralph Arlyck.

The critic Stuart Klawans, writing in The Nation, described the 2003 Green Mountain Film Festival as "a cinephile's utopia: a festival organized and supported by an entire community of local moviegoers."[1]

Every year hundreds of volunteers help run the festival and host special events at numerous venues across Montpelier, Vermont.

The 21st Green Mountain Film Festival was held on March 16-25th 2018, and featured 82 feature films and 75 shorts,[2] hands on workshops, a “coming of age” film short course, and the first Vermont Filmmakers Summit. Then-current director Karen Dillon spoke about the 21st anniversary saying that she wanted the festival to “feel like a party for everyone”.[2]

The 11th Green Mountain Film Festival was held from 21 to 30 March 2008. Notable films shown were:

The festival added a new venue at the Pavilion Auditorium, and also a three-day series of satellite screenings in Vermont's North East Kingdom.