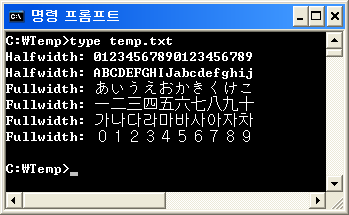 Halfwidth and Fullwidth Forms is also the name of a Unicode block U+FF00–FFEF, provided so that older encodings containing both halfwidth and fullwidth characters can have lossless translation to/from Unicode.

In the days of text mode computing, Western characters were normally laid out in a grid on the screen, often 80 columns by 24 or 25 lines. Each character was displayed as a small dot matrix, often about 8 pixels wide, and a SBCS (single-byte character set) was generally used to encode characters of Western languages.

On the other hand, early Japanese computing used a single-byte code page called JIS X 0201 for katakana. These would be rendered at the same width as the other single-byte characters, making them half-width kana characters rather than normally proportioned kana. Although the JIS X 0201 standard itself did not specify half-width display for katakana, this became the visually distinguishing feature in Shift JIS between the single-byte JIS X 0201 and double-byte JIS X 0208 katakana. Some IBM code pages used a similar treatment for Korean jamo,[1] based on the N-byte Hangul code and its EBCDIC translation.

Unicode assigns every code point an "East Asian width" property. This may be:[2]

Terminal emulators can use this property to decide whether a character should consume one or two "columns" when figuring out tabs and cursor position.

OpenType has the "fwid", "halt", "hwid" and "vhal" feature tags to be used for providing fullwidth or halfwidth form of a character.[citation needed]