Harvard's baseball program began competing in the 1865 season. It has appeared in four College World Series. It plays at Joseph J. O'Donnell Field and is currently coached by Bill Decker.

Harvard has an intercollegiate men's basketball program. The team currently competes in the Ivy League in Division I of the National Collegiate Athletic Association (NCAA) and play home games at the Lavietes Pavilion in Boston. The team's last appearance in the NCAA Division I men's basketball tournament was in 2014, where they beat Cincinnati in the Round of 64 in a 12 vs. 5 seed upset. The Crimson are currently coached by Tommy Amaker.

The football team has competed since 1873 (using rugby union rules through 1882).[10] They have won ten national championships when the school competed in what is now known as the FBS.[11] They are perhaps best known for their rivalry with Yale, known as "The Game". Sixteen former players have been inducted into the College Football Hall of Fame.

Harvard's athletic rivalry with Yale is intense in every sport in which they meet, coming to a climax each fall in their annual football meeting, which dates back to 1875. While Harvard's football team is no longer one of the country's best as it often was a century ago during football's early days (it won the Rose Bowl in 1920), both it and Yale have influenced the way the game is played. In 1903, Harvard Stadium introduced a new era into football with the first-ever permanent reinforced concrete stadium of its kind in the country. The stadium's structure actually played a role in the evolution of the college game. Seeking to reduce the alarming number of deaths and serious injuries in the sport, the "Father of Football", Walter Camp (former captain of the Yale football team), suggested widening the field to open up the game. But the state-of-the-art Harvard Stadium was too narrow to accommodate a wider playing surface. So, other steps had to be taken. Camp would instead support revolutionary new rules for the 1906 season. These included legalizing the forward pass, perhaps the most significant rule change in the sport's history.[12][13] 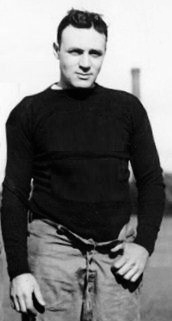 The men's ice hockey team is one of the oldest intercollegiate ice hockey teams in the United States, having played their first game on January 19, 1898 in a 0–6 loss to Brown.[23] Former head coach William H. Claflin and former captain George Owen are credited with the first use of line change in a game against Yale on March 3, 1923 when the Crimson substituted entire forward lines instead of individuals.[24] The men's ice hockey team won the NCAA Division I Championship on April 1, 1989, defeating the Minnesota Golden Gophers 4–3 in overtime.[25] The Cleary Cup, awarded to the ECAC regular-season champion, is named for former Harvard All-American hockey player, coach, and athletic director Bill Cleary, a member of the U.S. hockey team that won the 1960 Winter Olympics gold medal. The team competes in ECAC Hockey along with five other Ivy League schools and is coached by Harvard alumnus, Olympian, and former NHL forward, Ted Donato.[26] Harvard competes in one of the most heated rivalries of college hockey at least twice each season against Harvard's archrival, the Cornell Big Red, in installments of the Cornell–Harvard hockey rivalry. Cornell and Harvard are the most storied programs currently in the ECAC.

See the "Harvard Crimson ice hockey" navigation box at the bottom of the page.

Older than The Game by 23 years, the Harvard–Yale Regatta was the original source of the athletic rivalry between the two schools. It is held annually in June on the Thames river in eastern Connecticut. Both the Harvard heavyweight and lightweight teams are typically considered to be among the top teams in the country in rowing, having won numerous national championships in recent years.

For a time the Harvard lightweight men's team had one of the "oddest" streaks in collegiate sports, having won the national championships in every odd year from 1989 to 2003 (and in no corresponding even years).[29][30] The streak was broken when Harvard lost to Yale by almost 4 seconds in 2005.[31]

The women's heavyweight rowing team were NCAA Champions in 2003.

Michael Zimmerman played tennis for the Harvard tennis team, and was a member of four successive Ivy League championship winning teams, from 1989 to 1992. In both 1991 and 1992 he earned Ivy League Player of the Year and ITA All-American honors.[40]

Harvard has men's and women's teams in track & field in Indoor, Outdoor (Men, Women), and Cross-Country.[41] Among its notable athletes have been Bill Meanix, who held the world record in the 440 yd hurdles, and Milton Green, a world record holder in high hurdles.

Inaugural season for the men's team was 1981. The Crimson compete in the Eastern Intercollegiate Volleyball Association (EIVA) and are under the direction of head coach, Brian Baise.

Inaugural season for the women's team was 1981. The Crimson compete in the Ivy League and are under the direction of head coach, Jennifer Weiss.

Coach Ted Minnis heads both the Men's and Women's Water Polo teams, which compete in the Collegiate Water Polo Association. The teams both play in Blodgett Pool.

First established in 1913, the Harvard wrestling team celebrated its 100th anniversary in 2013–14, making the Crimson one of the oldest collegiate wrestling programs in the nation. As part of that celebration GoCrimson.com released the "Top Moments in Harvard Wrestling History" in collaboration with the Harvard Crimson Wrestling team. The team practices and competes in the Malkin Athletic Center. In 1938, The Harvard Wrestling team featured the program's first national champion, John Harkness. Jesse Jantzen ’04 graduated in 2004 as the most accomplished wrestler in Harvard history. The Crimson's all-time leader in wins (132), win percentage (.910) and pins (50), Jantzen's accomplishments also include: 2004 NCAA Champion, 2004 NCAA Most Outstanding Wrestler, 3 Time NCAA All-American, 3 Time EIWA Champion, 4 Time NCAA Qualifier.[42]

Harvard has several athletic facilities, such as the Lavietes Pavilion, a multi-purpose arena and home to the basketball teams. The Malkin Athletic Center, known as the "MAC," serves both as the university's primary recreation facility and as home to the varsity men's and women's volleyball, men's and women's fencing, and wrestling teams. The five-story building includes two cardio rooms, a deep 25-yard swimming pool, a smaller pool for aquaerobics and other activities, a mezzanine, where all types of classes are held at all hours of the day, and an indoor cycling studio, three weight rooms, and a three-court gym floor to play basketball. The MAC also offers personal trainers and specialty classes. The MAC is also home to volleyball, fencing, and wrestling. The offices of several of the school's varsity coaches are also in the MAC.

Weld Boathouse and Newell Boathouse house the women's and men's rowing teams, respectively. The men's heavyweight team also uses the Red Top complex in Ledyard, CT, as their training camp for the annual Harvard–Yale Regatta. The Bright Hockey Center hosts the ice hockey teams, and the Murr Center serves both as a home for the squash and tennis teams as well as a strength and conditioning center for all athletic sports.

Harvard Undergraduate Television has footage from historical games and athletic events including the 2005 pep-rally before the Harvard-Yale Game. Harvard's official athletics website has more comprehensive information about Harvard's athletic facilities.