Primary part of a phrase that determines its grammatical category (e.g. "noun", "verb")

In linguistics, the head or nucleus of a phrase is the word that determines the syntactic category of that phrase. For example, the head of the noun phrase boiling hot water is the noun (head noun) water. Analogously, the head of a compound is the stem that determines the semantic category of that compound. For example, the head of the compound noun handbag is bag, since a handbag is a bag, not a hand. The other elements of the phrase or compound modify the head, and are therefore the head's dependents.[1] Headed phrases and compounds are called endocentric, whereas exocentric ("headless") phrases and compounds (if they exist) lack a clear head. Heads are crucial to establishing the direction of branching. Head-initial phrases are right-branching, head-final phrases are left-branching, and head-medial phrases combine left- and right-branching.

The word dog is the head of big red dog since it determines that the phrase is a noun phrase, not an adjective phrase. Because the adjectives big and red modify this head noun, they are its dependents.[2] Similarly, in the compound noun birdsong, the stem song is the head since it determines the basic meaning of the compound. The stem bird modifies this meaning and is therefore dependent on song. Birdsong is a kind of song, not a kind of bird. Conversely, a songbird is a type of bird since the stem bird is the head in this compound. The heads of phrases can often be identified by way of constituency tests. For instance, substituting a single word in place of the phrase big red dog requires the substitute to be a noun (or pronoun), not an adjective.

The constituency relation is shown on the left and the dependency relation on the right. The a-trees identify heads by way of category labels, whereas the b-trees use the words themselves as the labels.[4] The noun stories (N) is the head over the adjective funny (A). In the constituency trees on the left, the noun projects its category status up to the mother node, so that the entire phrase is identified as a noun phrase (NP). In the dependency trees on the right, the noun projects only a single node, whereby this node dominates the one node that the adjective projects, a situation that also identifies the entirety as an NP. The constituency trees are structurally the same as their dependency counterparts, the only difference being that a different convention is used for marking heads and dependents. The conventions illustrated with these trees are just a couple of the various tools that grammarians employ to identify heads and dependents. While other conventions abound, they are usually similar to the ones illustrated here. 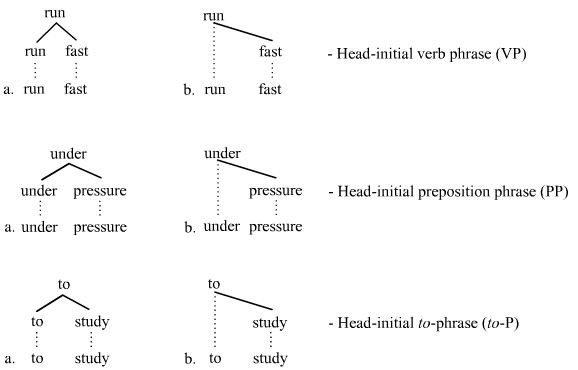 And the following six trees are examples of head-medial phrases: 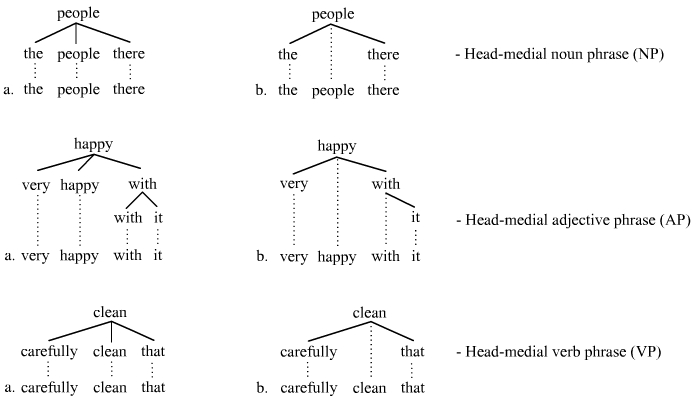 The head-medial constituency trees here assume a more traditional n-ary branching analysis. Since some prominent phrase structure grammars (e.g. most work in Government and binding theory and the Minimalist Program) take all branching to be binary, these head-medial a-trees may be controversial.

Trees that are based on the X-bar schema also acknowledge head-initial, head-final, and head-medial phrases, although the depiction of heads is less direct. The standard X-bar schema for English is as follows:

Some language typologists classify language syntax according to a head directionality parameter in word order, that is, whether a phrase is head-initial (= right-branching) or head-final (= left-branching), assuming that it has a fixed word order at all. English is more head-initial than head-final, as illustrated with the following dependency tree of the first sentence of Franz Kafka's The Metamorphosis: 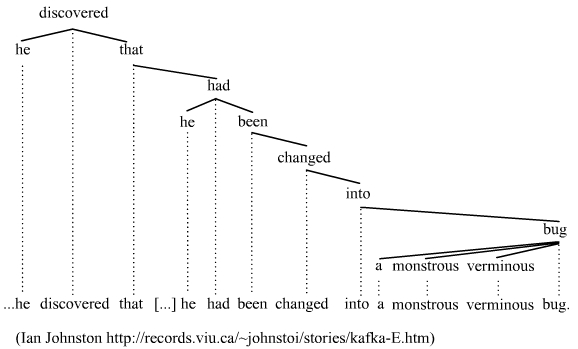 The following tree is of the same sentence from Kafka's story. The glossing conventions are those established by Lehmann. One can easily see the extent to which Japanese is head-final:

A large majority of head-dependent orderings in Japanese are head-final. This fact is obvious in this tree, since structure is strongly ascending as speech and processing move from left to right. Thus the word order of Japanese is in a sense the opposite of English.

It is also common to classify language morphology according to whether a phrase is head-marking or dependent-marking. A given dependency is head-marking, if something about the dependent influences the form of the head, and a given dependency is dependent-marking, if something about the head influences the form of the dependent.

The ↑bus was late.

A low head is the syllable that begins the head and is low in pitch, usually lower than the beginning pitch of the tone on the tonic syllable.

The ↓bus was late.