Isocitrate dehydrogenase [NADP], mitochondrial is an enzyme that in humans is encoded by the IDH2 gene.[5]

Isocitrate dehydrogenase is composed of 3 subunits, allosterically regulated, and requires an integrated Mg2+ or Mn2+ ion. The mitochondrial form of IDH, like most isoforms, is a homodimer, in which two identical monomer subunits form one unit. The structure of Mycobacterium tuberculosis IDH-1 bound with NADPH and Mn2+ has been solved by X-ray crystallography. It is a homodimer in which each subunit has a Rossmann fold, and a common top domain of interlocking β sheets. Mtb IDH-1 is most structurally similar to the R132H mutant human IDH found in certain glioblastomas. Similar to human R132H ICDH, Mtb ICDH-1 also catalyzes the formation of α-hydroxyglutarate.[7]

Isocitrate dehydrogenase is a digestive enzyme that is used in the citric acid cycle. Its main function is to catalyze the oxidative decarboxylation of isocitrate into alpha-ketoglutarate. Human isocitrate dehydrogenase regulation is not fully understood however, it is known that NADP and Ca2+ bind in the active site to create three different conformations. These conformations form in the active site and are as follows: a loop is form in the inactive enzyme, a partially unraveled alpha helix in the semi open form, and an alpha helix in the active form.[8]

The mitochondrial form of IDH2 is correlated with many diseases. Mutations in IDH2 are associated with 2-hydroxyglutaric aciduria, a condition that causes progressive damage to the brain. The major types of this disorder are called D-2-hydroxyglutaric aciduria (D-2-HGA), L-2-hydroxyglutaric aciduria (L-2-HGA), and combined D,L-2-hydroxyglutaric aciduria (D,L-2-HGA). The main features of D-2-HGA are delayed development, seizures, weak muscle tone (hypotonia), and abnormalities in the largest part of the brain (the cerebrum), which controls many important functions such as muscle movement, speech, vision, thinking, emotion, and memory. Researchers have described two subtypes of D-2-HGA, type I and type II. The two subtypes are distinguished by their genetic cause and pattern of inheritance, although they also have some differences in signs and symptoms. Type II tends to begin earlier and often causes more severe health problems than type I. Type II may also be associated with a weakened and enlarged heart (cardiomyopathy), a feature that is typically not found with type I. L-2-HGA particularly affects a region of the brain called the cerebellum, which is involved in coordinating movements. As a result, many affected individuals have problems with balance and muscle coordination (ataxia). Additional features of L-2-HGA can include delayed development, seizures, speech difficulties, and an unusually large head (macrocephaly). Typically, signs and symptoms of this disorder begin during infancy or early childhood. The disorder worsens over time, usually leading to severe disability by early adulthood. Combined D,L-2-HGA causes severe brain abnormalities that become apparent in early infancy. Affected infants have severe seizures, weak muscle tone (hypotonia), and breathing and feeding problems. They usually survive only into infancy or early childhood.[5]

Mutations in the IDH2 gene, along with mutations in the IDH1 gene, are also strongly correlated with the development of glioma, acute myeloid leukemia (AML), chondrosarcoma, intrahepatic cholangiocarcinoma (ICC), and angioimmunoblastic T-cell lymphoma cancers. They also cause D-2-hydroxyglutaric aciduria and Ollier and Maffucci syndromes. IDH2 mutations may allow prolonged survival of glioma and ICC cancer cells, but not AML cells. The reason for this is unknown. Missense mutations in the active site of these IDH2 induce a neo-enzymatic reaction wherein NADPH reduces αKG to D-2-hydroxyglutarate, which accumulates and leads to the inhibition of hypoxia-inducible factor 1α (HIF1α) degradation (inhibition of the HIF prolyl-hydroxylase), as well as changes in epigenetics and extracellular matrix homeostasis. Such mutations also imply less NADPH production capacity.[9] Tumors of various tissue types with IDH1/2 mutations show improved responses to radiation and chemotherapy.[10][11]

Inhibitors of the neomorphic activity of mutant IDH1 and IDH2 are currently in Phase I/II clinical trials for both solid and blood tumors. As IDH1 and IDH2 represent key enzymes within the tricarboxylic acid (TCA) cycle, mutations have significant impact on intermediary metabolism. The loss of some wild-type metabolic activity is an important, potentially deleterious and therapeutically exploitable consequence of oncogenic IDH mutations and requires continued investigation in the future.[12]

As a drug target

Drugs that target mutated forms of IDH2 include : 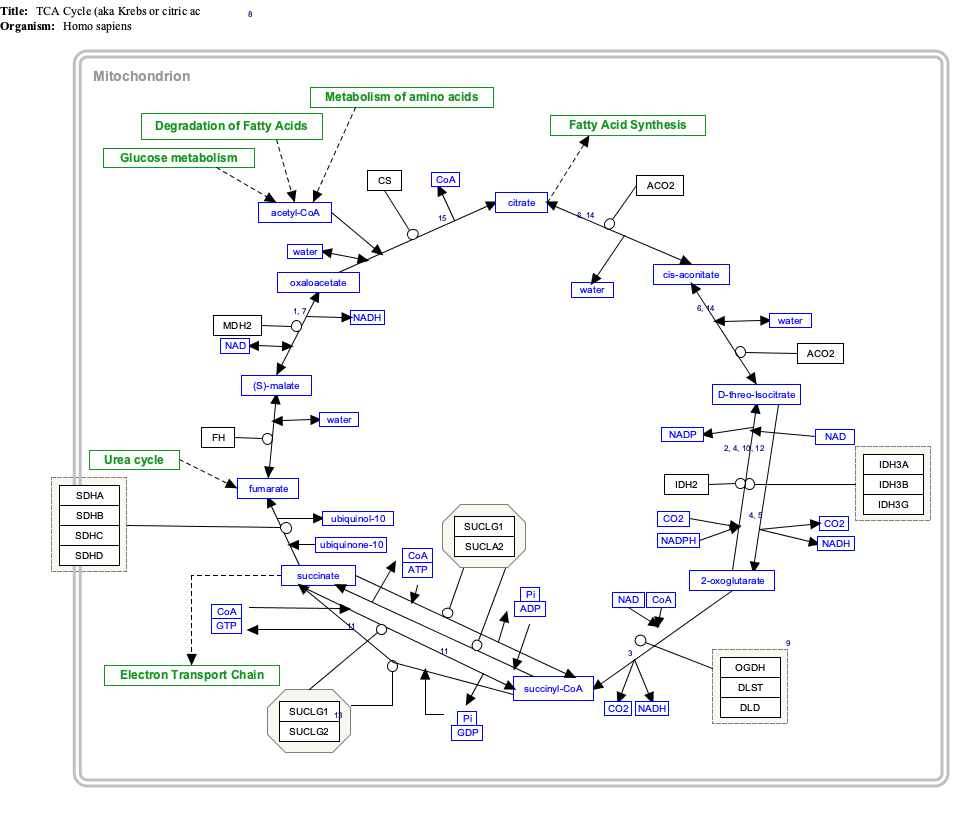