John Philip Jacob Elkann (born 1 April 1976) is an Italian-American[1] industrialist. In 1997, he became the chosen heir of his grandfather Gianni Agnelli, following the death of Gianni's nephew Giovanni Alberto Agnelli and since 2004 has been leading the Agnelli Family, an Italian multi-industry business dynasty. He chairs the automaker Stellantis and is the chairman and CEO of Exor, the holding company controlled by the Agnelli family, which also owns PartnerRe and holds a controlling stake in Ferrari, CNH Industrial, Juventus F.C. and The Economist Group. In July 2018 he was appointed chairman of Ferrari after Sergio Marchionne left due to health issues.

Born in New York City, John Elkann holds both Italian and American citizenship. He is the eldest son of Alain Elkann, a New York-born journalist and writer of French-Jewish and Italian-Jewish background,[2] and his then wife Italian Margherita Agnelli. His parents divorced in 1981 and both have remarried.[3] Elkann's maternal grandparents were the industrialist Gianni Agnelli and the Italian socialite Marella Agnelli (born Donna Marella Caracciolo di Castagneto). His paternal great-grand-uncle was the banker Ettore Ovazza.

Elkann attended primary school in both the United Kingdom and Brazil,[6] before his family moved to Paris, where he obtained a baccalauréat scientifique at the State School Lycée Victor-Duruy in 1994.[7] Later that same year, he moved to Italy to attend the Politecnico di Torino (Turin), where he graduated with a degree in management engineering in 2000.[7] As a result of his international upbringing, he is fluent in four languages.[8] While pursuing a degree in engineering, Elkann gained work experience through several internships: headlight plant in Birmingham, England (1996), production line in Tychy, Poland (1997), car dealership in Lille, France (1998) and also at GE's CIG (corporate initiatives group) where he worked on a thesis on e-auctions (1999).[9] In December 1997 Elkann was selected as the heir of his grandfather Gianni Agnell in place of Giovanni Alberto Agnelli, the son of Gianni's younger brother, Umberto, who had died at the age of 33.[10][11] He was appointed to the Fiat board at the age of 21.[12] In 2000, after graduating in Engineering from Politecnico di Torino, he joined General Electric's Corporate Audit program. He left General Electric two years later.[13] He moved back to Turin to be closer to his ageing grandfather, as well as be closer to the family business.[14]

Elkann was instrumental in the appointment of FCA CEO Sergio Marchionne, in May 2004.[16]

After the deaths of his grandfather Gianni Agnelli in 2003, and his great-uncle Umberto Agnelli in 2004, Elkann became vice chairman of Fiat and vice chairman of Giovanni Agnelli Sapaz (now Giovanni Agnelli B.V.), the family partnership controlling EXOR.[17] In 2008, Elkann replaced 83-year-old Gianluigi Gabetti as the head of IFIL, which managed a portfolio worth eight billion euros.[18] In March 2009 he merged the holding companies IFI and IFIL to create Exor, stepping to the role of Chairman.[19] In 2010, he became chairman of Fiat S.p.A. (now Fiat Chrysler Automobiles), succeeding Luca Cordero di Montezemolo, and chairman of the Giovanni Agnelli Sapaz, succeeding Gianluigi Gabetti [it]. In February 2011, he was appointed chairman and CEO of EXOR.[20] Since Elkann's appointment, the value of the company's assets has grown and multiplied nine times in ten years.[21]

He is also Chairman of Ferrari,[22] Vice Chairman of GEDI Gruppo Editoriale S.p.a.[23] and a board member of Partner Re.[24]

He is Chairman of the Agnelli Foundation, a philanthropic institution supporting education.[25]

In 2013, he was included by Fortune in the world's most influential managers under the age of 40.[26]

In June 2017, to celebrate the 150th anniversary of Italian newspaper La Stampa, which was acquired by the Agnelli family in 1926, he organized an international conference, "The Future of Newspapers".[27]

In February 2018, he appeared as one of the protagonists on the podcast series by Reid Hoffman, Masters of Scale.[28]

In 2019, Elkann announced he would be trying to merge Fiat Chrysler (FCA) with Peugeot S.A. (Groupe PSA), with the goal of forming the world's 4th largest OEM by volume and 3rd largest by revenues.[29] In July 2020, John and FCA's CEO Mike Manley announced that the name of the combined company will be Stellantis.[30][31]

In 2019, under Elkann's management, Exor purchased the controlling stake in GEDI Gruppo Editoriale from CIR Group for $113 million.[32]

In March 2020, Elkann and FCA’s board of directors agreed to forego their remaining compensation for 2020 in an act of shared sacrifice brought on by the Coronavirus pandemic.[33]

In May 2021, Elkann is nominated Knight of the Order of Merit for Labour in the automotive industry by the president Sergio Mattarella.[34]

Elkann was baptized and raised Catholic.[36] Elkann married Donna Lavinia Borromeo (born Lavinia Ida Borromeo-Arese on 10 March 1977 in Milan, Italy) a member of the prominent Italian aristocratic family the House of Borromeo.[37][38] She is the daughter of Don Carlo Ferdinando Borromeo, Count of Arona (born in 1935), the son of Vitaliano Borromeo, 2nd Prince of Angera. They married, on 4 September 2004, in a Catholic ceremony in the Cappella Bianca on Isola Madre, one of the Borromean Islands of Lake Maggiore.[39]

Since 2009, has been attending the annual "media and tech conference" organized in July every year by Allen & Co at Sun Valley, Idaho.[44]

He is also a regular contributor to the Google Camp, which every year gathers tech entrepreneurs, investors, representatives of institutions and pop stars in Sciacca, Agrigento and other places around Sicily.[45]

In June 2018, he invited Peter Thiel, Reid Hoffman, Xavier Niel and other global tech leaders to the SEI Torino Forum for the international launch of the new School of Entrepreneurship and Innovation of Turin,[46] the initiative supported by the Agnelli Foundation helping university level students to start new businesses.[47]

In April 2019, along with CERN's Director-General Fabiola Gianotti and the Italian architect Renzo Piano, he participated in a media event to unveil Science Gateway, a new scientific education and outreach centre of CERN, which aims to share knowledge and technology with society.[48] In June 2021, he celebrated another step with the laying of the first stone. The project will be funded through external donations, with Stellantis, through the FCA Foundation, as the main supporter.[49]

In July 2020 he took part in the institutional presentation of the full-electric New 500 to the President of the Italian Republic, Sergio Mattarella and Giuseppe Conte, the Italian Prime Minister.[50]

Starting from July 2020, he supported the launch and expansion of the Arcipelago Educativo project, co-designed and promoted by Fondazione Agnelli, Exor, and Save the Children to fight the risk of dropping out of students, due to the lockdown caused by COVID-19.[51]

In October 2021 he participated at the Italian Tech Week in a dialogue focused on innovation, future and technology with Elon Musk.[52]

In December 2021 he has been included inside Bloomberg’s “50 Most Influential people and ideas that defined global business in 2021” for the merger of Fiat Chrysler Automobiles NV with the PSA Group to form Stellantis, that started its trading with a $52.7 billion market value.[53] 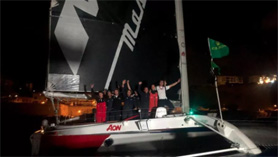 John Elkann, Giovanni Soldini and the Maserati Multi V70 at the finish line of the Rolex Middle Sea Race 2020.

A yachtsman, in March 2012 John Elkann took part as owner in the Miami-New York crossing on the Maserati monohull of Giovanni Soldini's team, with the aim of covering 947 miles and setting a new record in the monohull category.[54]

Following this crossing, in 2013 he participated in the Transpac Race from Los Angeles to Honolulu where they ranked second, as well as in the Cape2Rio, from Cape Town to Rio de Janeiro, where they won and set the new speed record of the regatta.[55]

In January 2015, he took part with Giovanni Soldini in the Maserati team, in the Rorc Caribbean 600 Race, a regatta that has been held since February throughout the Caribbean.[56]

In January 2020 he participated in the 16th edition of the Cape2Rio aboard Soldini's VOR70 Maserati, sailing 3.600 miles from Cape Town to Rio de Janeiro.[57]

In October 2020, once again aboard with Soldini, he conquered the first position at the 41stedition of the Rolex Middle Sea Race with the Maserati Multi 70.[58]

In August 2021, he kicked off the 89th edition of the 24 Hours of Le Mans, which saw the participation of the new LMH, a class in which Ferrari will enter starting from 2023.[59]