Sir John Hawkins (also spelled Hawkyns) (1532 – 12 November 1595) was a pioneering English naval commander and administrator. He was also a privateer and an early promoter of English involvement in the Atlantic slave trade.

His elder brother and trading partner was William (b. c.1519). He was considered the first English trader to profit from the Triangle Trade, based on selling supplies to colonies ill-supplied by their home countries, and their demand for African slaves in the Spanish colonies of Santo Domingo and Venezuela in the late 16th century. He styled himself "captain general" as the general of both his own flotilla of ships and those of the English Royal Navy, and to distinguish himself from those Admirals that served only in the administrative sense and were not military in nature. His death, and that of his second cousin and protégé, Sir Francis Drake, heralded the decline of the Royal Navy for decades before its recovery; its eventual resurgence helped by the tales of derring-do of the Navy's glory days under his leadership.[citation needed]

As Treasurer of the Navy (1578[1]–1595[citation needed]), Hawkins rebuilt older ships and directed design of faster ships that withstood the Spanish Armada in 1588. One of the foremost seamen of 16th-century England, Hawkins was the chief architect of the Elizabethan Navy. In the battle which defeated the Spanish Armada in 1588, Hawkins served as a Vice-Admiral. He was knighted for gallantry. He later devised the naval blockade that intercepted Spanish treasure ships leaving Mexico and South America.

John Hawkins was born to a prominent family in Plymouth in the county of Devon. His exact date of birth is unknown, but was likely between November 1532 and March 1533.[2] He was the second son of William Hawkins, who was the first Englishman to sail to Brazil,[3] (b. before 1490, d. 1554/5) and Joan Trelawny, daughter and sole heiress of Roger Trelawny of Brighton, Cornwall.[4] He was a Protestant.[5]

Hawkins is thought to have done some service as a young man for the ambassadors from Spain, who negotiated the marriage of Mary I of England and Philip II of Spain. The Spanish claim that Hawkins was personally knighted by the King for this service, which is as yet unconfirmed. Hawkins was known to have referred frequently to King Philip as "my old master". In fact, Hawkins was known as Juan Aquines by the Spaniards, who Castilianised the name, such was his fame among them.[4]

Hawkins married Margaret Vaughan of Hergest Court, a future Lady in Waiting to Queen Elizabeth I.[6] Their son Richard was born c.1562.

Hawkins received commission from Queen Elizabeth I which allowed him to privateer. England was not at war with Spain, but the commission allowed Hawkins to plunder the Spanish fleet for loot.[7] Hawkins formed a venture syndicate with Sir William Winter, Sir Lionel Duckett, Sir Thomas Lodge, Mr. Bromfield, and others to invest in trade with Africa.[8] In 1562, he set sail with three ships to Sierra Leone where he took 300 slaves to the plantations in the Americas where he traded the slaves for pearls, hides, and sugar.[7][9]

The trade was so prosperous that on his return to England Queen Elizabeth supported additional voyages and granted Hawkins a coat of arms which displays a male slave on it.[7] Arms granted to John Hawkins in 1565, for the profits he made in the Atlantic slave trade. Sable on a point wavy, a lion passant or, in chief three bezants, crest, a demi Moor in his proper colour, bound and captive, with annulets in his arms and ears. Note the lion in the grant of arms is described as passant, but in the accompanying illustration is statant.

The Spanish liked to keep a monopoly on trade, but Diego Ruiz de Vallejo, public accountant, allowed Hawkins to trade slaves on the condition he pay 7.5% of the Almojarifazgo tax. Alonzo Bernaldez, the Borburata governor, submitted a report in which the transaction was recorded as legitimate. After Hawkins traded at all Venezuelan ports and Rio de la Hacha, with advantageous returns, he was awarded a certificate of good behaviour. In summary, Hernando de Heredia, Rio de la Hacha public notary and councilman hereby stated:

During the course of the first 19 days of May, Sir Juan Haquines, commander of the English fleet stationed in Rio de la Hacha, carried out commercial operations with all residents by trading slaves and goods...

A commercial licence was extended to him on 21 May 1565 by honorable sir Rodrigo Caso, city regular mayor, Hernando Castilla, Miguel de Castellanos, treasurer, Lazaro de Vallejo Alderete, quartermaster, Baltasar de Castellanos and Domingo Felix, aldermen. During the same year, Audience of Santo Domingo initiated investigations leading to know about the irregular activities performed by Rio de la Hacha seniors officials who were involved in a deal with John Hawkins. Castellanos, the treasurer, was accused of having a fraudulent deal regarding to slave trade. It was the third time the English filibuster roamed about the area accomplishing large commercial operations among which the slave trade was significant. This fact was not overlooked by Santo Domingo Audience civil servants in connection to his visits to Venezuelan ports: In the year 65 [...] recorded in 1567 [...] there was such a coaster named Juan de Aquines, Englishman [...] with enough goods and 300 to 400 slaves product of his raids in Guinea territory [...] In the Province of Venezuela quite a few slaves and merchandise were rescued from this Englishman and others such as Frenchmen and Portuguese who were accustomed to this kind of activities....[11]

After completing his business, Hawkins prepared to return to England. Needing water, he sailed to the French colony of Fort Caroline in Florida. Finding them in need, he traded his smallest ship and a quantity of provisions to them for cannon, powder, and shot, that they no longer needed, as they were preparing to return to France. The provisions gained from Hawkins enabled the French to survive and prepare to move back home as soon as possible. As René Goulaine de Laudonnière writes: "I may saye that wee receaved as manye courtesies of the Generall, as it was possible to receive of any man living. Wherein doubtlesse hee hath wonne the reputation of a good and charitable man, deserving to be esteemed as much of us all as if hee had saved all our lives."[12] 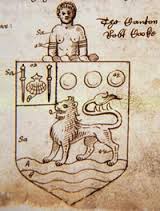 The later grant of arms to John Hawkins in 1571, with the addition bearing heraldic symbols related to Riohacha, Colombia (then Rio de la Hacha), for his notable victory there, the addition being; on a canton or, an escallop between two palmers staves sable

In 1578 Hawkins was appointed Treasurer of the Navy.[13] Hawkins's financial reforms of the Navy upset many who had vested interests. In 1582, his rival, Sir William Wynter, accused him of administrative malfeasance, instigating a Royal Commission on fraud against him. The commission, under William Cecil, 1st Baron Burghley, Francis Walsingham, and Drake, concluded that there was no corruption, and that the Queen's Navy was in first-rate condition.[14]

He embarked on a comprehensive reform of naval administration and managed to achieve an annual saving of nearly £4000 per annum, while at the same time raising naval pay.[15] He reformed the design of galleons so that they were longer, able to carry a larger number of guns and capable of sailing closer to the wind.[16] As a result of Hawkins' reforms, according to Garrett Mattingly, the Navy was a "fighting-fleet faster and more weatherly than any that had ever been seen on the ocean before".[16] He also increased the size of the Navy, so that by 1587 it consisted of 23 ships and 18 pinnaces.[15] The historian Conyers Read said of Hawkins' tenure as Treasurer of the Navy: "To him if to any single man belongs the chief credit for the first-rate fighting fleet which Elizabeth was able to launch against the Armada".[17]

After the defeat of the Armada, Hawkins urged the seizure of Philip II's colonial treasure, in order to stop Spain re-arming. In 1589, Hawkins sailed with Francis Drake in a massive military operation (the Drake & Norris Expedition). One of its goals was to try to intercept the Spanish treasure ships departing from Mexico. One decisive action might have forced Philip II to the negotiating table and avoided fourteen years of continuing warfare. Instead, the voyage failed and the King was able to use the brief respite to rebuild his naval forces and, by the end of 1589, Spain once again had an Atlantic fleet strong enough to escort the American treasure ships home.[18]

The Hospital of Sir John Hawkins Knight in Chatham

Historians have noted that Hawkins and his crew were some of the first travellers from Europe to observe tobacco use in the Americas during their voyages in 1562. Sparke's chronicle of his second voyage recounts the inhabitants, of Fort Caroline in what is now north-east Florida, smoking tobacco leaves on approximately 20 July 1565: “The Floridians ... haue a kinde of herbe dryed1 [1 Tobacco.] which with a cane, and an earthen cup in the end, with fire, and the dried herbs put together do smoke thoro the cane the smoke thereof ... .”[19] He and his men brought back both the leaves and the practice of smoking to England in 1565, though the practice did not gain in popularity until years after.[20][21]

Hawkins' son Richard was defeated and captured by the Spanish in 1593, at the battle at Atacames Bay. With Sir Francis Drake, John Hawkins raised a fleet of 27 ships to attack the Spanish in the West Indies. They set sail from Plymouth on 29 August 1595. Bad weather and skirmishes with the Spanish fleet hampered their efforts to get his son back. On 12 November 1595, it was reported that Hawkins died at sea close to Puerto Rico.[7][22]

The historian Geoffrey Elton appraised Hawkins as "one of the founding-fathers of England's naval tradition ... he was a man of commanding presence and intellect, of outstanding abilities as a seaman, administrator, fighter and diplomat, and endowed with such charm that even his opponents in the Spanish colonies could only remark ruefully that once you let Hawkins talk to you you would end up by doing his will".[23]

Lady Hawkins survived her husband, dying in 1619: her will endowed Lady Hawkins' School in Kington, Herefordshire.

The Royal Navy named a heavy cruiser HMS Hawkins after Hawkins; the ship was in commission from 1919 to 1947.[24]

The Hospital of Sir John Hawkins Knight in Chatham, Kent is named after Hawkins.[25] There was also a flyover in Chatham, which was demolished in 2008.[26]

In June 2006 Andrew Hawkins, who said he was a descendent, publicly apologised for John Hawkins's actions in the slave trade.[27] Andrew and 20 friends from the Christian charity Lifeline Expedition knelt in chains before 25,000 Africans to ask forgiveness for his ancestor's involvement in the slave trade at Independence Stadium in Bakau, the Gambia. The Vice-President of the Gambia Isatou Njie Saidy symbolically removed the chains in a spirit of reconciliation and forgiveness.[28][9]

In June 2020, Plymouth City Council announced that due to Hawkins's links with the slave trade, it planned to rename Sir John Hawkins Square after footballer Jack Leslie, who was, during his time with Plymouth Argyle, the only black professional player in England.[29][30]