Johnstown is a home rule municipality in Weld and Larimer counties in the U.S. state of Colorado. The population was 9,887 at the 2010 United States Census.

The Town of Johnstown began with the vision of Harvey J. Parish before its platting in 1902. The town was named for Parish's son.[8] The town was incorporated in 1907.[9] 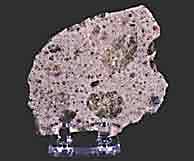 A meteorite fall in the adjacent former town of Elwell on the afternoon of 6 July 1924, became known as the Johnstown meteorite. It was notable with a number of large pieces of the broken-up asteroid recovered, including one of 23.5 kg (52 lb) that impacted into the Earth to a depth of 1.7 m (5.5 ft). The meteorite fell during an outdoor funeral service with more than 200 people attending who witnessed the event or heard the several stones falling.[10] The meteorite is classified as an "achondrite stony meteorite of the diogenite class in the HED group"[11] of meteorites that are believed to have hived off of the asteroid Vesta approximately one billion years ago.[11]

There were 3,356 households, out of which 42.8% had children under the age of 18 living with them, 69.7% were married couples living together, 7.0% had a female householder with no husband present, and 18.4% were non-families. 13.8% of all households were made up of individuals, and 4.0% had someone living alone who was 65 years of age or older. The average household size was 2.95 and the average family size was 3.25.

Johnstown is served by two school districts.[17] The majority of residents fall within Weld County School District RE-5J, though the northwest of the town falls within Thompson R2-J School District.