Julie Maurine Foudy (/ˈdʒuli ˈfaʊdiː/ FOW-dee; born January 23, 1971) is an American retired soccer midfielder, two-time FIFA Women's World Cup champion and two-time Olympic gold medalist. She played for the United States women's national soccer team from 1988 to 2004. Foudy finished her international career with 274 caps and served as the team's captain from 2000 to 2004 as well as the co-captain from 1991 to 2000.[1] In 1997, she was the first American and first woman to receive the FIFA Fair Play Award.

From 2000 to 2002, Foudy served as president of the Women's Sports Foundation. In 2006, she co-founded the Julie Foudy Sports Leadership Academy, an organization focused on developing leadership skills in teenage girls. In 2007, she was inducted into the National Soccer Hall of Fame with her teammate, Mia Hamm. She is currently an analyst, reporter and the primary color commentator for women's soccer telecasts on ESPN.

Foudy is the author of Choose to Matter: Being Courageously and Fabulously YOU[2] and appeared in the HBO documentary Dare to Dream: The Story of the U.S. Women's Soccer Team.[3] She was the executive producer of the documentary short, An Equal Playing Field, starring Christen Press and producer of the ESPN Nine for IX episode entitled, The 99ers featuring some of her teammates from the 1999 FIFA Women's World Cup-winning U.S. national team.

Foudy attended Stanford University, where she was honored as the Stanford Cardinal women's soccer Player of the Year for three straight years (1989–91).[4][5] She was a four-time NSCAA All-American at Stanford and finished her collegiate career with 52 goals, 32 assists and 136 points in 78 appearances. She was named the 1991 Soccer America Player of the Year and the 1989 Soccer America Freshman of the Year and was a two-time finalist for the Hermann Trophy in 1991 and 1992. She helped lead the Cardinal to NCAA tournament playoff berths all four years. She was the recipient of the Stanford Outstanding Freshman, Sophomore and Junior Athlete Award and was named to Soccer America's College Team of the Decade for the 1990s.[6]

Foudy played for the Sacramento Storm, which won the 1993, 1995 and 1997 California State Amateur championship.

In 1994, Foudy played for Tyresö FF in the Damallsvenskan in Sweden joining her national team teammates, Michelle Akers, Mary Harvey and Kristine Lilly.

Foudy held the captain's position for her Women's United Soccer Association (WUSA) team, the San Diego Spirit. She made 59 regular season appearances, scoring eight goals and providing 13 assists.[7] When the WUSA suspended operations in September 2003, Foudy was the official player's representative to the ongoing efforts to resurrect the league.

Foudy began traveling with the United States women's national soccer team as a 16-year-old. She attended the 1988 FIFA Women's Invitation Tournament as a non-playing substitute,[8] then made her first appearance against France at the Mundialito on July 29, 1988.[6]

Foudy has served as an in-studio analyst for ABC, ESPN and ESPN2's coverage of the 2006 FIFA World Cup and UEFA Euro 2008, and has provided on-air commentary and analysis during United States Women's National Team matches since then. She has also coanchored ABC and ESPN telecasts of the 2007 FIFA Women's World Cup and the 2007 season of Major League Soccer, including the MLS Cup. She appeared as a pundit for the ESPN coverage of the UEFA Euro 2008 championship finals, together with Andy Gray and Tommy Smyth. For the 2010 FIFA World Cup, she served as a reporter and analyst, doing features, interviews and analysis in South Africa for ESPN. Foudy is also a reporter for ESPN's investigative program, Outside the Lines. She served as a sportsdesk reporter for NBC Sports coverage of the 2008 Summer Olympics.[12] She also fills in for Dana Jacobson on ESPN First Take. Since late-2010, Foudy has been paired with Glenn Davis or Ian Darke on ESPN's primary broadcast team for women's soccer telecasts, as was the case for the 2011 FIFA Women's World Cup.[13]

On Aug. 20th, 2013, ESPN Films teamed up with Foudy to premiere their new Nine for IX film on the 1999 Women's World Cup Team, The 99ers. The film, directed by Erin Leyden, and produced by Foudy, tells the incredible story of the 1999 United States women's national soccer team, using Foudy's personal behind the scenes footage. Reuniting key players from the 1999 squad and talking with current U.S. players as well, the film examines how women's soccer – and women's sports as a whole – has changed since that epic day at the Rose Bowl.[14]

Foudy worked as ESPN's reporter from the 2018 Winter Olympics and the 2019 FIFA Women's World Cup.

Foudy is the host of the podcast Laughter Permitted, which interviews "trailblazers in sports about the joy/chaos of life and sports."[15]

The Julie Foudy Sports Leadership Academy (JFSLA) is an organization focused on sports and leadership for girls founded in 2006 by Foudy and her husband Ian Sawyers.[16] The academy hosts one-week combined sports camp (soccer or lacrosse) and leadership academy for girls age 12–18. The staff includes Olympic gold medalists, World Cup champions and other leaders.[17] The camps are focused on leadership building "on and off the field".[18] According to Foudy, “...having a productive successful team is not about one person or about one part of that team. It’s a successful team which means everyone contributes. When I look back over my U.S. team career our most successful teams which won World Cups and Olympic medals had one common denominator, we all contributed to positive team chemistry.”[19] While conducting a youth soccer clinic in Tampa in 2006, she said that the success of the U.S. women's soccer team in the FIFA World Cup tournaments and Summer Olympics had transformed the way soccer federations internationally think about women's soccer.[11]

EspnW's network appeals to young women of GenZ who were born between 1997 and 2012.[20] EspnW was founded in July 2010.[21] EspnW and JFSLA work together to create an inspiring environment to promote young female athletes. These two organizations uses multiple platforms including social media such as twitter, snapchat and Instagram to help promote women's sports.

In 1997, she received the FIFA Fair Play Award for her work against child labor, the first American and first woman to win the award.[6] For her accomplishments in soccer in the United States, Foudy was awarded the Golden Blazer in 2015 by Men in Blazers.[23] 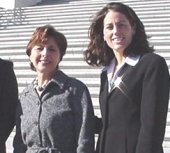 Foudy with Senator Barbara Boxer in 2001

Brandi Chastain and Julie Foudy in Brazil in 2014

Foudy has been active in a number of political causes relating to women's rights and workers' rights. In 1998, she received the FIFA Fair Play Award in recognition of her advocacy against child labor in sports equipment manufacturing. The year before she had made trip to Pakistan to inspect working conditions at a factory where soccer balls were manufactured for her then-sponsor, Reebok.[25]

In 2002, Foudy, a former president of the Women's Sports Foundation, was named by United States Secretary of Education Rod Paige to the Commission on Opportunity in Athletics, a panel charged with reviewing the effects and implementation of the landmark 1972 Title IX legislation. Foudy and fellow commission member Donna de Varona refused to sign the report authored by the commission, saying that the report downplayed the persistence of gender-based discrimination in school athletics and that some of its recommendations would allow schools to get away with discrimination. They released a minority report recommending that current anti-discrimination policies remain in place. Paige ultimately decided to only pursue the recommendations that earned unanimous support from the commission.[26]

Julie Foudy and Ian Sawyers have been married since 1995. Foudy gave birth to their first child, a daughter named Isabel Ann, on January 1, 2007. Their second child, a son named Declan, was born in December 2008.

In 2014, Brandi Chastain and Julie Foudy worked together to host clinics for young women in Brazil to encourage young women to play soccer.[27]

Foudy appeared in the HBO documentary Dare to Dream: The Story of the U.S. Women's Soccer Team.[3] She also appears in the HBO Max documentary film LFG.