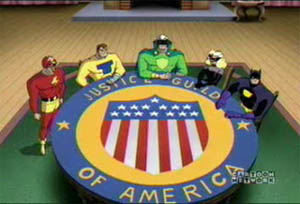 Justice Guild as shown in the Justice League series

At the climax of a fight between the Justice League and a giant robot remote-controlled by Lex Luthor, it falls over, threatening to crush Flash, Green Lantern, Hawkgirl, and J'onn J'onzz. The Flash tries to stop the damaged robot falling onto the other Leaguers by running so fast that he creates a tornado-like vortex just as the robot's energy core explodes. This causes the four heroes to accidentally be sent to a parallel Earth existing in a different vibrational frequency from the Justice League's own. They end up in Seaboard City, an idyllic 1950s locale that evokes the traits of Pleasantville or other such havens and features an ice cream van which plays "Pop Goes the Weasel", a tune regularly employed on that show.

There, they meet the Justice Guild of America members Tom Turbine, The Streak, the Green Guardsman (not to be confused with Green Guardsman of Amalgam Comics), Black Siren, Catman, and their sidekick/mascot Ray Thompson. They first fight when Green Lantern and Flash stop a robbery by Justice Guild enemy Music Master and the Guild mistakes them for the thieves. After the Streak sees Flash save Ray from pieces of a falling building, he realizes the League aren't criminals and stops the fight. The Justice Guild were comic book characters on the Justice League's Earth about whom Green Lantern read as a child. He claims without the comics, he may not have the ring today, as the comics taught him to be a hero. J'onn J'onzz hypothesizes that the JGA writers were psychically tuned in to their Earth during flashes of "inspiration"; this is a nod to the explanation Gardner Fox provided for the JSA/JLA link in his September 1961 story Flash of Two Worlds in which the Barry Allen Flash of Earth-One encounters Jay Garrick, his Earth-Two counterpart. They help the JGA fight a group of their enemies called the Injustice Guild of America, who are based on Golden Age DC supervillains, which consists of Music Master, Sportsman, Sir Swami, and Doctor Blizzard after they were given a letter by Sergeant O'Shaughnessey and his unnamed partner. The IGA engage in a scheme to pull off a series of crimes based on the four elements of earth, air, water, and fire as part of a contest to see which of them can pull off the best crime related to those elements, and by doing so will lead the IGA in their next criminal activity. Doctor Blizzard wins when he takes Flash and Black Siren as hostages, and he leads the IGA in robbing the Seaboard City Mint and escaping by blimp. The IGA are defeated by the JL and the JGA and are handed over to the police.

Meanwhile, Hawkgirl discovers graves of the JGA covered in vines, prompting her and Lantern to probe deeper into inconsistencies found in the "perfect" Seaboard City, such as how some, if not all dangers in it happen to come from out of nowhere (a question from Flash even correctly suggests that Sergeant O'Shaughnessy and his partner are the only two police officers in the entire city). The two question the driver of the ice cream truck, constantly driving around, about their suspicions, but he only responds to their questions with unspecific answers including about the last time he ever actually sold any ice cream. He can only say that "he" might hear them before driving away. They go to a library, where they discover that all of books on the shelves have blank pages, and going to the basement, they find a brick wall behind the basement door. After Hawkgirl smashes through it, they find a battle-scarred subway tunnel, and an old newspaper (itself dated on the same day as the final Justice Guild comic). The newspaper's articles reveal to them the JGA world's version of the Cuban Missile Crisis had escalated into World War III, with the heroes all perishing in the resultant U.S.-Soviet nuclear exchange, and Seaboard City being destroyed by the ensuing nuclear holocaust: the deaths of the JGA was the thus cause of the Justice Guild comic book being cancelled in the Justice League's world.

Hawkgirl and Lantern show this knowledge to Flash, J'onn and the JGA; shocked, the JGA deny that their existence is nothing more than an illusion. J'onn suspects Ray Thompson is the key to the bizarre state of this reality. Ray denies knowing anything, but J'onn makes a telepathic link with him, causing him to reveal his true form: a disfigured mutant with the ability to warp reality and create psychic illusions. Ray's abilities were activated by the holocaust, and he created the false time warp the city is in as a consequence of their manifestation. With a distorted and nostalgic view of the past, he recreated the world of his childhood and resurrected the heroes he worshiped as a child. Angrily, Ray goes on a rampage and tries to kill the JL, while distracting the JGA with a giant red robot. The Guild heroes are initially unsure of what they should do, realizing the only chance they have of saving the JL and stopping Ray is by defeating him, which will undo the illusion and everything within it, including themselves. They eventually decide they can forfeit their false lives to do this, reasoning that inasmuch as they had sacrifice themselves to save their world once, they can do so again. They all attack Ray, overwhelming his mind and shattering the illusion. Lantern then watches in dismay as the JGA fade away into oblivion with smiles on their faces whilst Tom Turbine salutes him.

The Mayor of Seaboard City, Sergeant O'Shaughnessy, his partner, the ice cream man, and all of the other civilians are freed from the illusion. The ice cream man stated that war destroyed their world and now they have the opportunity to begin to rebuild their shattered world starting with Seaboard City as the civilians thank the League for giving them a future. The Justice League members return to their own Earth using a space-time machine Tom Turbine was working on before his death, powered by Green Lantern's ring.

Back on his own Earth, John Stewart ponders of how much the JGA comics meant to him when he was young and the impact the comics' cancellation in 1962 (the year the actual Guild died) had on him. He remarks to Hawkgirl that the JGA taught him the meaning of the word hero, a commentary on the bright, optimistic Golden and Silver Age's contrast to the Bronze and Modern Age's grittiness and angst.

Among the members of the Justice Guild are:

A group of super-villains whose goal is to eliminate the Justice Guild and rule the world. They make their headquarters in a cave somewhere outside of Seaboard City. Among its members are:

Elements of this concept are seen within the Arrowverse: