Kenneth Bruce McGregor (2 June 1929 – 1 December 2007) was an Australian tennis player from Adelaide who won the Men's Singles title at the Australian Championships in 1952. He and his longtime doubles partner, Frank Sedgman, are generally considered one of the greatest men's doubles teams of all time and won the doubles Grand Slam in 1951. McGregor was also a member of three Australian Davis Cup winning teams in 1950–1952. In 1953, Jack Kramer induced both Sedgman and McGregor to turn professional. He was ranked as high as World No. 3 in 1952.[1]

McGregor was a fine all-round athlete, excelling in cricket, Australian rules football, and tennis. He also played lacrosse.[7] At 6 ft 2 in (1.88 m), he had a powerful serve and overhead. The great tennis player Ellsworth Vines said of McGregor: "He was the same height as Pancho Gonzales, faster, moved as well and could jump higher, and once he got to the net he was difficult to pass because of his prehensile reach. The handsome Aussie had the most extraordinary overhead of all time." In his 1979 autobiography Jack Kramer, the long-time tennis promoter and great player himself who brought McGregor into professional tennis, wrote that "McGregor was one of the weakest players but one of the nicest guys who ever played for me in the pros. As nearly as I could tell, all he wanted to do was save up some money, go back Down Under and play Australian-rules football, which in fact, he played better than he did tennis. And that's what he did."

In early January 1953 McGregor and Sedgman signed a contract to join Jack Kramer's professional tour.[8][9] This made them ineligible to compete in the amateur Grand Slam tournaments and Davis Cup.

After his retirement from tennis at the age of 25 he returned to Australian rules football and played five seasons for West Adelaide in the SANFL.[11] 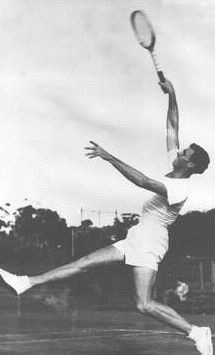 Ken McGregor hitting a smash in the early 1950's.

Ken McGregor was the son of Bruce and Winnifred McGregor. Bruce was the winner of the 1926 and 1927 SANFL Magarey Medals and was the West Adelaide Football Club's premiership captain-coach in 1927 as well as the Glenelg Football Club's inaugural premiership coach in 1934. Ken had one sister (Betty) who was born in 1927, the day their father Bruce was awarded his second Magarey Medal.

In 1953 he married Winifred Caro.[2] McGregor had a history of heart problems, but was diagnosed with stomach cancer ten days prior to his death on 1 December 2007.[14] He was survived by his wife, two children, and five grandchildren.