La forza del destino is frequently performed, and there have been a number of complete recordings. In addition, the overture (to the revised version of the opera) is part of the standard repertoire for orchestras, often played as the opening piece at concerts. 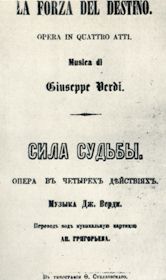 After its premiere in Russia, La forza underwent some revisions and made its debut abroad with performances in Rome in 1863 under the title Don Alvaro. Performances followed in Madrid (with the Duke of Rivas, the play's author, in attendance) and the opera subsequently travelled to New York, Vienna (1865), Buenos Aires (1866), and London (1867).[citation needed]

Following these productions, Verdi made further, more extensive revisions to the opera with additions to the libretto by Antonio Ghislanzoni. This version, which premiered at La Scala, Milan, on 27 February 1869, has become the standard performance version. The most important changes were a new overture (replacing a brief prelude); the addition of a final scene to act 3, following the duel between Carlo and Alvaro; and a new ending, in which Alvaro remains alive, instead of throwing himself off a cliff to his death. The opera in this version is frequently performed in the world's opera houses today.[2]

Critical editions[3] of all versions of the opera (including material from the original 1861 score) have been prepared by musicologist Philip Gossett of the University of Chicago.[4]

In November 2005, the critical edition of the 1869 version was first performed by the San Francisco Opera whose program book included an essay by Gossett on the evolution of the various versions: "La forza del destino: Three States of One Opera".[5] The Caramoor International Music Festival gave a concert performance of the critical edition of the 1862 version, plus never-performed vocal pieces from the 1861 version, in July 2008.[citation needed] The music begins with the opera's "Fate" motif, an ominous three note E unison in the brass.

The mansion of Leonora's family, in Seville

Don Alvaro, a young nobleman from South America (presumably Peru), has settled in Seville, Spain, where he is looked down on by many because of his Inca background. There, he and Donna Leonora, the daughter of the haughty Marchese di Calatrava,[11] have fallen in love. But her father the Marchese violently opposes a match he feels is dishonorable and beneath her, believing her to have been seduced. Notwithstanding her tender regard for her father, who until now has always been kind to her, Leonora is ready to give up family and country in order to elope with Alvaro. Aided by her confidante, Curra. (Me pellegrina ed orfana – "Exiled and orphaned far from my childhood home"), she prepares to leave.

When Alvaro arrives to fetch her, however, Leonora, hesitates, begging for one last day with her father. Alvaro, stunned, releases her from their engagement, saying that she cannot love him as much as he loves her. Leonora then relents and they agree to escape as planned. At that moment the Marchese suddenly enters and discovers the couple together. Assuming the worst, he draws his weapons and threatens the young man with death. To remove any suspicion as to Leonora's purity, Alvaro surrenders himself. As he flings down his pistol, it goes off, mortally wounding the Marchese, who dies, uttering a curse on his daughter. The horrified lovers rush out of the room.

Scene 1: An inn in the village of Hornachuelos

About a year has passed since the death of the Marchese di Calatrava. In their flight, Leonora and Alvaro were separated and have lost track of each other, unable to reunite or learn of each other's whereabouts.

The act opens in the crowded dining room of an inn, where the guests include the alcalde (town mayor) and several muleteers among others gathered in the dining room as dinner is about to be served. Leonora's brother Don Carlo di Vargas then enters, bent on avenging the family honor and the death of his father. Carlo has disguised himself as a student from Salamanca by the name of Pereda. (Son Pereda son ricco d'onore – "I am Pereda, of honorable descent"). During the supper, Preziosilla, a pretty gypsy fortune teller, joins them and sings a song urging them to enlist in the army (Al suon del tamburo – "When side drums rattle") for Italy's freedom.[12] Leonora arrives in male attire accompanied by Trabuco, a muleteer, on their way to a to Franciscan monastery where Leonora plans to seek refuge. Recognizing her brother, who she knows wants to kill her, she hides. Carlo/"Pereda" grills Trabuco about the identity of his traveling companion, but the company lets him know they don't like his prying questions. They turn the tables by asking Carlo who he is. He claims to be a University student helping a friend track down the friend's sister and her seducer, who, he claims has returned to his native America. The gipsy girl laughs and says she doesn't believe this story. Overhearing this, Leonora realizes that Alvaro is still alive. She concludes he has betrayed and abandoned her, and she slips away without being discovered.

Scene 2: A monastery nearby

Outside the monastery of the Madonna of Angels, Leonora, seeking sanctuary and solitary atonement, has come to take refuge in the monastery intending to live the rest of her life as a hermit (Son giunta! Grazie, o Dio! Estremo asil quest'è per me! ... Madre, pietosa Vergine, – "I've arrived! Thank heaven! My last resort and hope"... "Mother, merciful Virgin".) After a somewhat surly reception by Fra Melitone, she tells the abbot, Padre Guardiano, her true name and her wish to spend the remainder of her life in the monastery's hermitage. The abbot recounts the trials she will have to undergo. Padre Guardiano agrees to direct her to a secret cave in the mountains, where he alone will bring her food and where she will find a bell which she is to ring only in times of great danger of if she is on the point of death. Leonora, Padre Guardiano, Fra Melitone, and the other monks join in prayer as she is formally accepted as tenant of the hermitage.

Scene 1: A forest near Velletri, in Italy

Meanwhile, Alvaro, believing Leonora to be dead, has joined the Spanish army under the name of Don Federico Herreros and has distinguished himself for bravery (La vita è inferno all'infelice ... O tu che in seno agli angeli – "Life is a hell to an unhappy man." ... "Oh, you who dwell with the angels"). He is interrupted by cries for help and rescues a man from two assassins. It is Don Carlo, who has newly joined the same regiment, also under an assumed name: Don Felix Bornos. The two become friends and march off side by side to fight in the Battle of Velletri, an historical event which occurred in 1744.

Alvaro is brought into the officers' quarters, gravely wounded in the chest. Thinking he is about to die, he entrusts the key to a casket to his friend "Don Felix" (Carlo). The box contains packet of letters, which Alvaro says contain a secret. He makes his friend swear to burn them without reading them: (Solenne in quest'ora, giurarmi dovete far pago un mio voto – "You must swear to me in this solemn hour, to carry out my wish."). Felix/Carlo assures Alvaro that he won't die and that he will be decorated with the Order of Calatrava for his bravery. At the name Calatrava Alvaro shudders and exclaims, "No!" Carlo is taken aback. He is afraid that "Don Federico" (Alvaro) may in truth be the mysterious seducer who killed his father. He resolves to look at the letters to settle his doubts. (Morir! Tremenda cosa! ... Urna fatale del mio destino – "To die! An immense thing... Begone, fatal vessel of my destiny!"). As his wounded friend is taken away on the surgeon's stretcher, he opens the casket, finds his sister's portrait, and realizes Alvaro's true identity. At that moment a surgeon brings word that Don Alvaro may recover. Don Carlo exults at the prospect of avenging his father's death.

Scene 3: A camp near the battleground

Having recovered, Alvaro is confronted by Carlo. They begin to duel, but are pulled away from each other by the soldiers. As they restrain Carlo, the anguished Don Alvaro vows to enter a monastery.

The soldiers gather. Trabucco, the peddler, tries to sell them his wares; Fra Melitone chastises them for their godless ways; and Preziosilla leads them in a chorus in praise of the military life (Rataplan, rataplan, della gloria – "Rum-tum-tum on the drum is the music that makes a soldier's martial spirit rise").

Impoverished peasants from the region approach Fra Melitone at the monastery at Hornachuelos for food and Padre Guardiano gently scolds Melitone for his less than charitable behavior towards them. Don Carlo then approaches, having learned of the presence of Don Alvaro there. Under the name of Father Raphael, Alvaro has indeed entered the monastery, near which is Leonora's cave. Alvaro offers peace, but when Carlo taunts him as a half-breed Alvaro takes up the challenge and the two rush from the monastery. (Le minacce, i fieri accenti – "May the winds carry off with them"). Leonora, longing for the peaceful release of death, restates her love for Alvaro and begs God for peace. (Pace, pace, mio Dio! – "Peace, O mighty Father, give me peace!"). The duel between the two men spills over onto the neighboring crags in the vicinity of Leonora's isolation. Upon hearing the clashing of swords she takes refuge in her cave. Carlo is mortally wounded by Alvaro, who invades the hermit's sanctuary to request the last offices for the dying man. Leonora and Alvaro recognize each other. Alvaro tells her of what has happened, and she rushes to embrace her dying brother. As she bends over him, he stabs her in the heart. The Father Superior, who has come in answer to Leonora's alarm bell, orders Alvaro to stop cursing fate and to humble himself before God. The dying Leonora joins him in this plea, and Alvaro declaims that he is now redeemed.

[Original version: Overcome by the guilt at having killed or caused the death of all the Calatravas, Alvaro jumps to his death into the nearby ravine, cursing humankind, over the protests of Father Guardiano].

Over the years La forza has acquired a reputation for being cursed, following some unfortunate incidents.[13] In 1960 at the Metropolitan Opera, the noted baritone Leonard Warren collapsed and died during a performance of the opera.[14] The supposed curse reportedly kept Luciano Pavarotti from ever performing the opera, and the tenor Franco Corelli to follow small rituals during performances to avoid bad luck.[15]

The main theme in the musical scores for the films Jean de Florette and Manon des Sources (both 1986) was adapted by Jean-Claude Petit from the duet "Invano, Alvaro" in La forza del destino. The Korean film The Scarlet Letter (2004) opens with "Pace, pace mio Dio", introducing a film about intensely powerful obsession which brings its lovers to the brink of madness.[citation needed] La forza del destino also plays a thematic role in the novel series A Series of Unfortunate Events (1999–2006).[16]