Property of all triangles on a Euclidean plane

where γ denotes the angle contained between sides of lengths a and b and opposite the side of length c. For the same figure, the other two relations are analogous: Though the notion of the cosine was not yet developed in his time, Euclid's Elements, dating back to the 3rd century BC, contains an early geometric theorem almost equivalent to the law of cosines. The cases of obtuse triangles and acute triangles (corresponding to the two cases of negative or positive cosine) are treated separately, in Propositions 12 and 13 of Book 2. Trigonometric functions and algebra (in particular negative numbers) being absent in Euclid's time, the statement has a more geometric flavor:

Using notation as in Fig. 2, Euclid's statement can be represented by the formula

This formula may be transformed into the law of cosines by noting that CH = (CB) cos(π − γ) = −(CB) cos γ. Proposition 13 contains an entirely analogous statement for acute triangles.

The theorem was popularized in the Western world by François Viète in the 16th century. At the beginning of the 19th century, modern algebraic notation allowed the law of cosines to be written in its current symbolic form. Fig. 3 – Applications of the law of cosines: unknown side and unknown angle.

The theorem is used in triangulation, for solving a triangle or circle, i.e., to find (see Figure 3):

These formulas produce high round-off errors in floating point calculations if the triangle is very acute, i.e., if c is small relative to a and b or γ is small compared to 1. It is even possible to obtain a result slightly greater than one for the cosine of an angle. Consider a triangle with sides of length a, b, c, where θ is the measurement of the angle opposite the side of length c. This triangle can be placed on the Cartesian coordinate system with side a aligned along the "x" axis and angle θ placed at the origin, by plotting the components of the 3 points of the triangle as shown in Fig. 4:

By the distance formula,

Squaring both sides and simplifying

An advantage of this proof is that it does not require the consideration of different cases for when the triangle is acute, right, or obtuse. Fig. 5 – An acute triangle with perpendicular

Dropping the perpendicular onto the side c through point C, an altitude of the triangle, shows (see Fig. 5)

(This is still true if α or β is obtuse, in which case the perpendicular falls outside the triangle.) Multiplying through by c yields

Considering the two other altitudes of the triangle yields

Subtracting the first equation from the last one results in

This proof uses trigonometry in that it treats the cosines of the various angles as quantities in their own right. It uses the fact that the cosine of an angle expresses the relation between the two sides enclosing that angle in any right triangle. Other proofs (below) are more geometric in that they treat an expression such as a cos γ merely as a label for the length of a certain line segment.

Many proofs deal with the cases of obtuse and acute angles γ separately. Cosine theorem in plane trigonometry, proof based on Pythagorean theorem.

Case of an obtuse angle

Euclid proved this theorem by applying the Pythagorean theorem to each of the two right triangles in the figure shown (AHB and CHB). Using d to denote the line segment CH and h for the height BH, triangle AHB gives us

Substituting the second equation into this, the following can be obtained:

This is Euclid's Proposition 12 from Book 2 of the Elements.[6] To transform it into the modern form of the law of cosines, note that

Case of an acute angle

Euclid's proof of his Proposition 13 proceeds along the same lines as his proof of Proposition 12: he applies the Pythagorean theorem to both right triangles formed by dropping the perpendicular onto one of the sides enclosing the angle γ and uses the square of a difference to simplify. Fig. 6 – A short proof using trigonometry for the case of an acute angle

Another proof in the acute case

Using more trigonometry, the law of cosines can be deduced by using the Pythagorean theorem only once. In fact, by using the right triangle on the left hand side of Fig. 6 it can be shown that:

This proof needs a slight modification if b < a cos(γ). In this case, the right triangle to which the Pythagorean theorem is applied moves outside the triangle ABC. The only effect this has on the calculation is that the quantity b − a cos(γ) is replaced by a cos(γ) − b. As this quantity enters the calculation only through its square, the rest of the proof is unaffected. However, this problem only occurs when β is obtuse, and may be avoided by reflecting the triangle about the bisector of γ.

Referring to Fig. 6 it is worth noting that if the angle opposite side a is α then:

This is useful for direct calculation of a second angle when two sides and an included angle are given. Referring to the diagram, triangle ABC with sides AB = c, BC = a and AC = b is drawn inside its circumcircle as shown. Triangle ABD is constructed congruent to triangle ABC with AD = BC and BD = AC. Perpendiculars from D and C meet base AB at E and F respectively. Then:

Now the law of cosines is rendered by a straightforward application of Ptolemy's theorem to cyclic quadrilateral ABCD:

Plainly if angle B is right, then ABCD is a rectangle and application of Ptolemy's theorem yields the Pythagorean theorem:

One can also prove the law of cosines by calculating areas. The change of sign as the angle γ becomes obtuse makes a case distinction necessary. 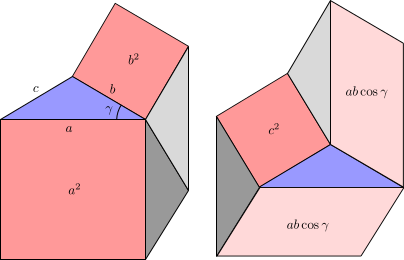 Fig. 7a – Proof of the law of cosines for acute angle γ by "cutting and pasting".

Acute case. Figure 7a shows a heptagon cut into smaller pieces (in two different ways) to yield a proof of the law of cosines. The various pieces are

Fig. 7b – Proof of the law of cosines for obtuse angle γ by "cutting and pasting".

Obtuse case. Figure 7b cuts a hexagon in two different ways into smaller pieces, yielding a proof of the law of cosines in the case that the angle γ is obtuse. We have

The rigorous proof will have to include proofs that various shapes are congruent and therefore have equal area. This will use the theory of congruent triangles.

Using geometry of the circle

Using the geometry of the circle, it is possible to give a more geometric proof than using the Pythagorean theorem alone. Algebraic manipulations (in particular the binomial theorem) are avoided. Case of acute angle γ, where a > 2b cos γ. Drop the perpendicular from A onto a = BC, creating a line segment of length b cos γ. Duplicate the right triangle to form the isosceles triangle ACP. Construct the circle with center A and radius b, and its tangent h = BH through B. The tangent h forms a right angle with the radius b (Euclid's Elements: Book 3, Proposition 18; or see here), so the yellow triangle in Figure 8 is right. Apply the Pythagorean theorem to obtain

Then use the tangent secant theorem (Euclid's Elements: Book 3, Proposition 36), which says that the square on the tangent through a point B outside the circle is equal to the product of the two lines segments (from B) created by any secant of the circle through B. In the present case: BH2 = BC·BP, or

Substituting into the previous equation gives the law of cosines:

Note that h2 is the power of the point B with respect to the circle. The use of the Pythagorean theorem and the tangent secant theorem can be replaced by a single application of the power of a point theorem. Case of acute angle γ, where a < 2b cos γ. Drop the perpendicular from A onto a = BC, creating a line segment of length b cos γ. Duplicate the right triangle to form the isosceles triangle ACP. Construct the circle with center A and radius b, and a chord through B perpendicular to c = AB, half of which is h = BH. Apply the Pythagorean theorem to obtain

Substituting into the previous equation gives the law of cosines:

Note that the power of the point B with respect to the circle has the negative value −h2. 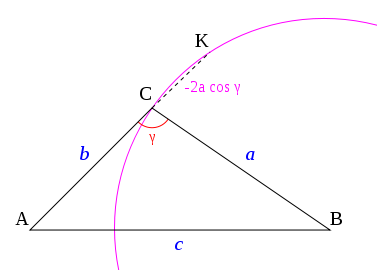 Fig. 9 – Proof of the law of cosines using the power of a point theorem.

Case of obtuse angle γ. This proof uses the power of a point theorem directly, without the auxiliary triangles obtained by constructing a tangent or a chord. Construct a circle with center B and radius a (see Figure 9), which intersects the secant through A and C in C and K. The power of the point A with respect to the circle is equal to both AB2 − BC2 and AC·AK. Therefore,

which is the law of cosines.

Using the law of sines

By using the law of sines and knowing that the angles of a triangle must sum to 180 degrees, we have the following system of equations (the three unknowns are the angles):

Then, by using the third equation of the system, we obtain a system of two equations in two variables:

where we have used the trigonometric property that the sine of a supplementary angle is equal to the sine of the angle.

By dividing the whole system by cos γ, we have:

Hence, from the first equation of the system, we can obtain

By substituting this expression into the second equation and by using

we can obtain one equation with one variable:

By multiplying by (b − c cos α)2, we can obtain the following equation:

Recalling the Pythagorean identity, we obtain the law of cosines:

Taking the dot product of each side with itself:

An analogous statement begins by taking α, β, γ, δ to be the areas of the four faces of a tetrahedron. Denote the dihedral angles by

When the angle, γ, is small and the adjacent sides, a and b, are of similar length, the right hand side of the standard form of the law of cosines is subject to catastrophic cancellation in numerical approximations. In situations where this is an important concern, a mathematically equivalent version of the law of cosines, similar to the haversine formula, can prove useful:

In the limit of an infinitesimal angle, the law of cosines degenerates into the circular arc length formula, c = a γ.

In spherical and hyperbolic geometry Spherical triangle solved by the law of cosines.

Versions similar to the law of cosines for the Euclidean plane also hold on a unit sphere and in a hyperbolic plane. In spherical geometry, a triangle is defined by three points u, v, and w on the unit sphere, and the arcs of great circles connecting those points. If these great circles make angles A, B, and C with opposite sides a, b, c then the spherical law of cosines asserts that both of the following relationships hold:

In hyperbolic geometry, a pair of equations are collectively known as the hyperbolic law of cosines. The first is

where sinh and cosh are the hyperbolic sine and cosine, and the second is

allows to unify the formulae for plane, sphere and pseudosphere into:

is a complex number, representing the surface's radius of curvature.

Verifying the formula for non-Euclidean geometry

In the first two cases,

are well-defined over the whole complex plane for all

, and retrieving former results is straightforward.

Hence, for a sphere of radius

Likewise, for a pseudosphere of radius

Verifying the formula in the limit of Euclidean geometry

In the Euclidean plane the appropriate limits for the above equation must be calculated:

Applying this to the general formula for a finite