Alessandro Del Piero has made 705 appearances for Juventus and he is the all-time top scorer of the club, with 290 goals Sívori, Charles and Boniperti, the Magical Trio of the Juventus squad during the ending of 1950s and beginning of 1960s 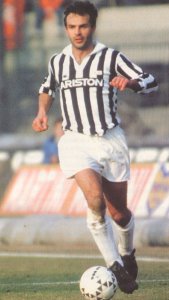 David Trezeguet — the best foreign scorer in the history of Juventus Pavel Nedvěd — he played for Juventus 327 games and scored 65 goals, as well as the winner of Ballon d'Or 2003

This is a list of Juventus F.C. players who have earned 100 or more caps for Juventus.

Players with 100 or more appearances for the club are listed in alphabetical order according to the date of their first-team official debut for the club. Appearances and goals are for all first-team competitive matches.[1] Substitute appearances included. Bold denotes current Juventus players. Carlo Bigatto Iº, the first Juventus captain ever and winner of the Italian Serie A as footballer and manager with Juventus

The role of captain in Italian football made its first appearance in the early 1920s.[4]

The table below shows the Juventus players who have won all three major UEFA club competitions[5] (chronological order).

List of Juventus' players to have won all UEFA club competitions

The table below show the Juventus players who have won all UEFA club competitions[7] (chronological order).