This article needs additional citations for verification. Please help improve this article by adding citations to reliable sources. Unsourced material may be challenged and removed.Find sources: "List of fictional ducks" – news · newspapers · books · scholar · JSTOR (December 2010) (Learn how and when to remove this template message)

Disney animators have created an entire universe of ducks, most of which are modeled after the American Pekin duck.[citation needed]

Residents of the Donald Duck universe

Live or costume ducks on television and film

Ducks in literature and song 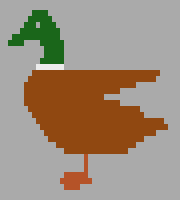 Ducks in other media