This article needs additional citations for verification. Please help improve this article by adding citations to reliable sources. Unsourced material may be challenged and removed.Find sources: "List of heraldic charges" – news · newspapers · books · scholar · JSTOR (January 2015) (Learn how and when to remove this template message)
This article may require cleanup to meet Wikipedia's quality standards. The specific problem is: Do not list random items without example or reference. Do not list 'nonce' items only found in recent emblems, give an example from classical heraldry with date of attestation for each item listed, if possible stay within examples of classical heraldry (before 1800). If it's only found in modern municipal arms but it must be added, at least explain where exactly it is found -- yes "a chicken wearing trousers" can be cited alongside "griffin" as a "heraldic charge", but there are degrees of notability.. Please help improve this article if you can. (March 2019) (Learn how and when to remove this template message)

This is a list of heraldic charges. It does not cover those charges which are geometrical patterns and resemble partitions of the field; for these, see Ordinary (heraldry).

Fox-Davies (1909) in his presentation of common heraldic charges divides them into the following categories (not including ordinaries and subordinaries): the human figure, the heraldic lion, beasts (mammals), monsters, birds, fish, reptiles, insects, plants (trees, leaves, fruits and flowers), and "inanimate objects".

a shield with three lozenges.

A number of simple geometric shapes have traditionally, and somewhat arbitrarily, been classified among the so-called subordinaries. (All other mobile charges are called common charges.)

Wikimedia Commons has media related to Human figures in heraldry. Coat of arms of the Hungarian town Komádi.

Any animal can be a heraldic charge, although more traditional ones vary in the exactitude with which they resemble the creature as found in nature. Animals depicted naturally are either described as natural or using the scientific nomenclature. Lion as a primary charge in the coat of arms of Finland. A sea-lion, illustrated in A Complete Guide to Heraldry (1909).

By far the most frequent heraldic bird is the eagle.[citation needed] A variant is the alerion, without beak or feet, seen in the arms of the duchy of Lorraine (of which it is not quite an anagram).

Also very frequent is the martlet, a conventional swallow depicted without feet or the French variant the merlette, which also omits the beak.

Fish and creatures of the sea

"Fish" are sometimes only described as "a fish", but the species is often named:

Parts of creatures may also be used as charges. Western arms of the Akihito as a Knight of the Garter, featuring a chrysanthemum

Trees and their fruits

Trees appear as eradicated (showing the roots) or couped. Fruit can appear on a tree, or by itself. Also, leaves and branches appear. Alder in the coat of arms of Grossarl, Austria.

Trees are sometimes merely blazoned as "a tree" but specific trees are mentioned in blazon.

A small group of trees is blazoned as a hurst, grove, wood or thicket.[2] Barley (French orge) in the arms of Orges, Switzerland

This article contains a list of miscellaneous information. Please relocate any relevant information into other sections or articles. (November 2018)

"one can safely say that there is scarcely an object under the sun which has not at some time or other been introduced into a coat of arms or crest. One cannot usefully make a book on armory assume the character of a general encyclopedia on useful knowledge, and reference will only be made in this chapter to a limited number, including those which from frequent usage have obtained a recognised heraldic character."

Originally representing the Christian cross used as field sign and standard during the Crusades, heraldic crosses diversified into many variants in the late medieval to early modern period, the most common (besides the plain "Greek cross") being the cross potent, cross pattée, cross fleury, cross moline, cross crosslet (etc.).

Wikimedia Commons has media related to Letters in heraldry. Lettering in coats of arms are usually placed in the motto, not in the heraldic shield as a charge. However, a tradition of introducing individual letters as heraldic charges on the basis of acrophony originates in the 15th to 16th century, primarily in personal and municipal heraldry, and with some frequency in the modern period, appearing more often on the continent than in British heraldry where letters as charges have traditionally been discouraged. Fox-Davies (1909:281) regarding letters of the alphabet as heraldic charges:

"Instances of these are scarcely common, but the family of Kekitmore[30] may be adduced as bearing 'Gules, three S's or,' while Bridlington Priory had for arms 'Per pale, sable and argent, three B's counterchanged.' [...] Corporate arms (in England) afford an instance of alphabetical letters in the case of the B's on the shield of Bermondsey."

One of the earliest instances of the use of letters as heraldic charges is that of the Langenmantel family of Augsburg. Rüdiger I Langenmantel (d. 1342), one of the leading figures of the Augsburg patriciate during the first four decades of the 14th century, is the founder of the "Langenmantel vom RR" branch of the family, derived from his coat of arms showing two letters R (for his given name), shown addorsed (as mirror images).[31] 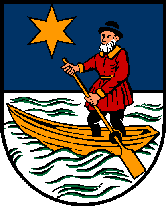 Coat of arms of Albert, Prince Consort, showing the harp of Ireland within the Royal Standard of the United Kingdom in the first and fourth quarters and a crancelin (a crown of rue, an ornamental plant) as a part of the Coat of arms of Saxony in the second and third. Arms of the Republic of the United Provinces: Gules, a crowned lion Or, armed and langued azure, holding a sword and a sheaf of arrows

Clothing and other personal items The arms of Bonsmoulins with a millwheel in the base