Originally, prime ministers headed loose coalitions of independents, which were often unstable; since the advent of political parties, the prime minister is usually the leader of the largest political party in the House.[1] Since 1935, every prime minister has been a member of either the National party or the Labour party, reflecting their domination of New Zealand politics.[3] After the introduction of mixed-member proportional voting in 1996, prime ministers have usually needed to negotiate agreements with smaller parties to maintain a majority in Parliament.[1]

The title of the office was originally "colonial secretary", which was formally changed to "premier" in 1869.[4] That title remained in use for more than 30 years, until Richard Seddon changed it to "prime minister" during his tenure in the office; he used the title officially at the Imperial Conference of 1903.[4]

Some historians regard James FitzGerald as New Zealand's first prime minister, although a more conventional view is that neither he nor his successor (Thomas Forsaith) should properly be given that title, as New Zealand did not yet have responsible government when they served.[1][5] Most commonly, Henry Sewell, who served during 1856, is regarded as New Zealand's first premier.[6] Beginning with Sewell, forty individuals have so far held the premiership,[7][8] not including acting prime ministers. Nine prime ministers have held the position for more than one period in office. Richard Seddon, Prime Minister for thirteen years between 1893 and 1906, held the office for the longest term.[9] The youngest prime minister was Edward Stafford, who assumed office at age 37, and the oldest was Walter Nash, who left office at age 78.[10] Three prime ministers have been women, a count equalled by Iceland, Lithuania, Poland and the United Kingdom, and only surpassed by Finland and Switzerland.[11]

The incumbent prime minister is Jacinda Ardern, who assumed office on 26 October 2017.[7] 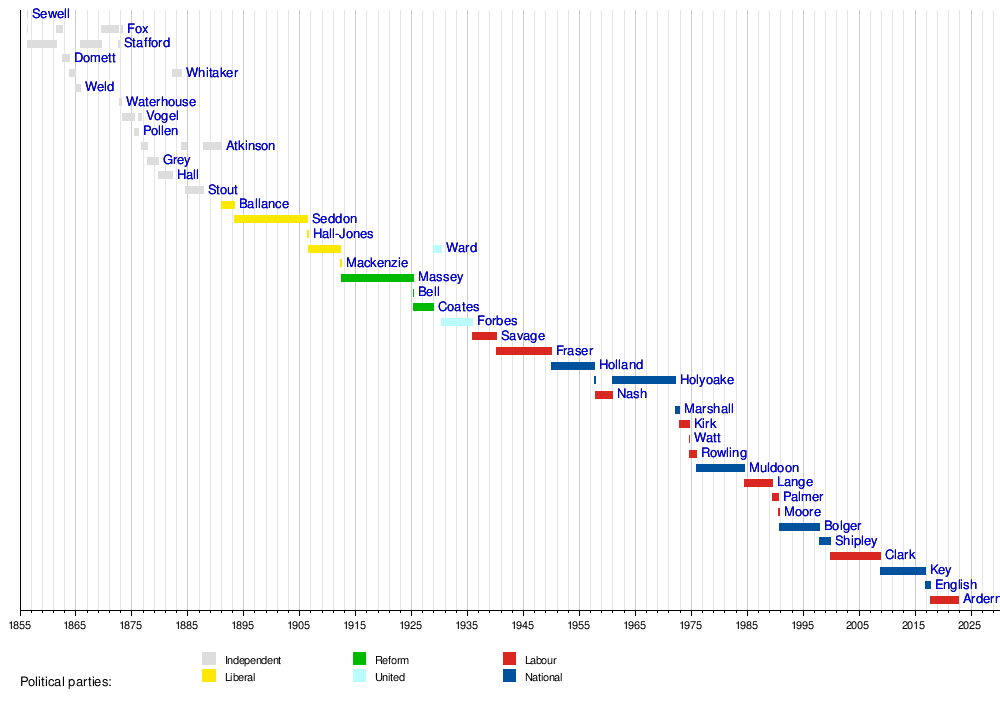