The ferries in Suffolk are a series of local ferry services in the county of Suffolk in Eastern England. Most cross rivers within the county, although some connect Suffolk with Essex to the south.

Aboard the modern Bawdsey Ferry

This ferry, for foot passengers and bicycles across the River Deben between Felixstowe Ferry and Bawdsey, provides continuity for the Suffolk Coast Path and Regional Cycle Route 41. It operates from Easter weekend until the end of October on a varying timetable,[1] and can also be used as a water taxi to moored yachts.[2]

Prior to 1894 the small passenger boats ran ferry trips. In 1894 Sir William Quilter, owner of Bawdsey Manor, established a steam-drawn chain ferry which the family owned until 1931. From 1931 until the start of WW2 Charlie Brinkley then operated a launch for passengers with his son Robert (senior).[3] Bawdsey Manor was purchased by the RAF in 1936 to become RAF Bawdsey[4] and the ferry was closed to the public during WW2. After the end of the war a daily service was operated until 1974 under contract to RAF Bawdsey and since 1974 it has operated on summer weekends only.[3] The Bawdsey Ferry is mentioned in three Acts of Parliament, the 'Felixstowe & Bawdsey Ferry Railway Act 1887',[5] the 'Felixstowe and Bawdsey Ferry Railway (Extension of Time) Act 1890'[6] and the 'Felixstowe and Bawdsey Ferry Rly.(Abandonment) Act 1892'[7]

A small ferry operates across the River Butley for foot passengers and for cyclists (no tandems) using Regional Cycle Route 41. It is operated by volunteers on Saturdays, Sundays and Bank Holidays from 11 am to 4 pm within the season, which is Easter Saturday to 30 September. Telephone: 07913 672499 but no bookings. The ferry does not operate when wind is Force 5 or above. It is sponsored by the Alde & Ore Association. More information is available from the notice on the pier. The ferry claims to be the smallest licensed ferry in Europe.[8] 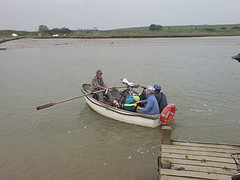 The ferry service was restarted by Bryan Rogers after a gap of 80 years and is now run by volunteers.[9]

Operates across the River Stour and River Orwell running between Harwich Quay and Landguard Fort near to the Port of Felixstowe and also to Shotley Gate on the Shotley Peninsula (summer only).

The Southwold to Walberswick ferry across the River Blyth uses a traditional rowing boat. In 2017 it operated daily from the start of April to the first week of November, other than most of May and October when it ran on weekends only.[10]

Until 1885 a rowing ferry was used when a floating bridge chain ferry was started, initially hand-cranked ferry later being replaced by a steam ferry which ran until 1942 after improvements to the harbour made operation of the ferry too difficult. Frank Palmer then restarted the old rowing ferry and was succeeded by Bob Cross and David Church.