Loharu State was one of the princely states of India during the period of the British Raj.[1] It was part of the Punjab States Agency and was a nine-gun salute state.[citation needed]

Loharu State encompassed an area of 222 square miles (570 km2), and was situated in the south-east corner of the undivided Punjab province, between the district of Hissar and the Rajputana Agency.[2] In 1901, the state had a population of 15,229 people, of whom 2,175 resided in the town of Loharu.[3] From 1803 to 1835, the territory of Loharu State also included an Ferozepur Jhirka enclave within the area directly administered by the British raj,[4][5] Outer limits of the state were defined by the peripheral towns of Loharu, Bahal, Isharwal, Kairu, Jui Khurd and Badhra.

The haveli of 'Nawab of Loharu', known as Mahal Sara, lies in Gali Qasim Jan in Ballimaran, where his son-in-law, noted poet Mirza Ghalib stayed for a few years, whose own Ghalib ki Haveli lies a few yard away.[6][7] Now the gali, which houses the Mahal Sara, is known as Kothi Nawab Loharu lane in Ballimaran mohalla of Chandni Chowk area in Old Delhi.[8]

Loharu town, the seat of the state's administration town got its name from the Lohars (local blacksmiths) who were employed in the minting of coins for the erstwhile Jaipur State.[9] The princely state of Loharu was founded by Ahmad Baksh Khan in 1803 when he received the town of Loharu, (along with the pargana of 'Firozepur Jirka' (now in Nuh district), from the Lord Lake of British East India Company as a reward for his services against the Jat rulers of Bharatpur.[5][10][11] 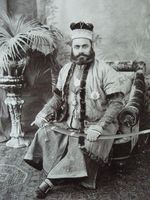 Ahmad Baksh Khan was succeeded by his eldest son, Sams-ud-din Khan [Samsudin Ahmad Khan], in 1827; his reign did not last long: in 1835 he was executed by the British Raj for being involved in the conspiracy to kill the British Resident to Delhi, Sir William Frazer,[12][13] Noted Urdu poet Daagh Dehlvi was a son of Nawab Samsuddin Khan.[14][15] subsequently the pargana of Firozepur was taken away by the British and the state of Loharu was given to his brothers, Amin-ud-din and Zia-ud-din Khan. Both were themselves kept under surveillance after the Indian Rebellion of 1857 for some time, before being released and their positions restored.

Alauddin Ahmed Khan succeeded his father Amin-ud-din Khan in 1869 and received the title of Nawab. Alauddin's son, Amir-ud-din Ahmad Khan (1859–1937), after managing the state on his father's behalf, succeed him in 1884, though from 1893 to 1903, he remained administrator and adviser of the state of Maler Kotla – during this time, the state was being handled by his younger brother, Bashiruddin Ahmed Khan. In 1903, Amir- ud-din Ahmad Khan also received the K.C.S.I honour from the British Government and after 1 January 1903 was allowed a 9 gun personal salute.[5] He later became a member of the Viceroy of India's legislative council.[3][16]

After the Independence of India in 1947, the state acceded to the Union of India and many of the ruling family and the city's Muslim inhabitants re-settled in Lahore, Pakistan, though the Nawab and his direct descendants (except for the eldest daughter of Nawab Aminuddin Ahmed, Mahbano Begum who lives in Islamabad), stayed on, in India.[12]

Notable members of the Loharu dynasty

The ruling family of Loharu was linked by blood or marriage to several important Muslim personalities of the 19th century, including:

Jaglan Zail of Bidhwan was adjacent to the Loharu State.

Mir Muhammad Khan, was a fine vocalist in the court of Maharaja Loharu, a descendant of Mir Allahbux who a famous vocalists and the court-musician of Raja Nahar Singh of Ballabhgarh State.[18]