The London Government Act 1963 (c. 33) is an Act of the Parliament of the United Kingdom, which created Greater London and a new local government structure within it. The Act significantly reduced the number of local government districts in the area, resulting in local authorities responsible for larger areas and populations. The upper tier of local government was reformed to cover the whole of the Greater London area and with a more strategic role; and the split of functions between upper and lower tiers was recast. The Act classified the boroughs into inner and outer London groups. The City of London and its corporation were essentially unreformed by the legislation. Subsequent amendments to the Act have significantly amended the upper tier arrangements, with the Greater London Council abolished in 1986, and the Greater London Authority introduced in 2000. As of 2016[update], the London boroughs are more or less identical to those created in 1965, although with some enhanced powers over services such as waste management and education.

The Act set up a two-tier local government system, with powers divided between the newly formed Greater London Council (GLC), 32 new London borough councils and the existing City of London. The provisions of the Act came into effect on 1 April 1965, the new councils having been elected as "shadow authorities" in 1964.

Section 2 declared that the area comprising the areas of the London boroughs, the City and the Temples shall constitute an administrative area to be known as Greater London. An elected Greater London Council was to govern the new area.

Section 3 abolished the administrative counties of Middlesex and London (created in 1889), and absorbed parts of Kent, Essex, Surrey and Hertfordshire plus the whole of the City of London to form the administrative area of Greater London. As well as the two counties, the twenty-eight existing metropolitan boroughs, plus all county boroughs, county districts or parishes that fell wholly within Greater London were to cease to exist, along with their councils. No part of Greater London was to form part of any administrative county, county district or parish. Three Middlesex urban districts not included in Greater London were transferred to other counties: Potters Bar to Hertfordshire and Staines and Sunbury-on-Thames to Surrey.

The Act also established the Inner London Education Authority to administer schools and colleges in the 12 inner London boroughs. The remaining 20 outer boroughs became local education authorities in their own right. The London Traffic Area and the London and Home Counties Traffic Advisory Committee, set up in 1924, were abolished, with the GLC gaining powers to regulate road traffic. An alteration was also made to the Metropolitan Police District to include the whole of Greater London, but the district continued to include a number of areas in surrounding counties. 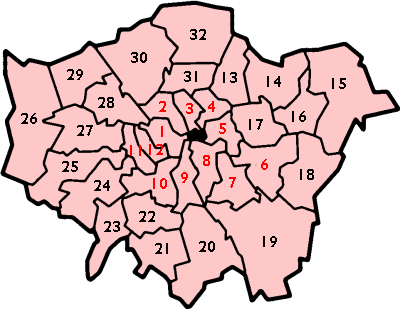 The composition of the London boroughs was given in Schedule 1 of the Act:

As passed, the Act did not include names for the new boroughs. Keith Joseph, the Minister, asked local councils for suggestions as to possible names, asking that they be a single word if possible, and noting that "the best name will be the place recognised as the centre of the new borough". Double-barrelled names were to be prohibited.[1][2]

The 'Royal Borough of Charlton' was proposed for the Greenwich and Woolwich metropolitan boroughs. Lewisham and Deptford were unable to agree on whether the borough should be named Lewisham, Deptford or after the central river/stream, Ravensbourne. The councils to become part of the London Borough of Barnet suggested "Northgate" or "Northern Heights" as names. Islington and Finsbury (Borough 3) were also unable to come to a decision, with Finsbury preferring "New River" and Islington preferring Islington. Richmond and Twickenham (Borough 24) disagreed over which, if any of those names should appear in the new borough names. Suggestions for Enfield (Borough 32) included "Enfield Chase" and "Edmonton Hundred".

Nine names were without controversy and were proposed in September 1963.[3]

The Minister proposed a further twelve names in January 1964[5]

Councillors for the Metropolitan Boroughs of Chelsea and Kensington were divided and opposed the loss of their two ancient parish names in combining, so the Minister for Housing and Local Government made one exception and the Royal Borough of Kensington and Chelsea came into being.

The split of functions between the new authorities were:[6]

A royal commission was appointed in 1957 under the chairmanship of Sir Edwin Herbert to consider future local government structures in Greater London. The commission delivered its report in October 1960 proposing the creation of a Greater London with 52 Greater London Boroughs.

The Greater London area set up by the 1963 Act was very similar to that proposed by the Herbert Report but excluded Banstead, Caterham and Warlingham, Esher, Walton and Weybridge in Surrey, Chigwell in Essex, Cheshunt in Hertfordshire, and Staines and Sunbury in Middlesex.

The government considered that the boroughs should be fewer and larger so published its plan for 34 London boroughs in late 1961.[7] In the County of London this reorganised the proposed boroughs so that combinations for the present boroughs of Camden, Westminster and Islington were achieved. The Hackney borough had Shoreditch rather than the Tower Hamlets borough. Lewisham would be standalone, Deptford would combine with Camberwell and Bermondsey, and Southwark and Lambeth would unite. Eastern Wandsworth was to form a borough in itself, with western Wandsworth being paired with Battersea.

Outside the former County of London, the outer London boroughs were to be:

The Minister of Housing and Local Government announced, on their request, that five urban districts (Cheshunt, Chigwell, Esher, Staines and Sunbury) were to be excluded from Greater London on 18 May 1961, having earlier confirmed the widely expected exclusion of Banstead, Caterham and Warlingham and Walton and Weybridge.

Requests from the councils of Romford, Barnet, Carshalton, Coulsdon and Purley, Feltham, Yiewsley and West Drayton to be removed from the area were turned down. Additionally, the department decided that the "northern part of the borough of Epsom and Ewell definitely forms part of Greater London and must be included".[8] Epsom and Ewell would ultimately be excluded from the area in its entirety.

Changes published in August 1962 saw a reduction from 33 to 32 boroughs, and in greater detail, Shoreditch to join Hackney; Wanstead and Woodford to be added to Ilford to form 'Redbridge' rather than join Waltham Forest; Chislehurst and Sidcup to be divided between the Bromley and the Bexley; East Barnet, Friern Barnet, Hendon, and Finchley to form a single borough (Barnet), Enfield to join Edmonton and Southgate (to be simply Enfield), the Tottenham, Hornsey and Wood Green authorities to combine to form Haringey and at the most local level, Clapham and Streatham neighbourhoods to join Lambeth.[9]

The slightly amended form was laid before Parliament for substantive debates from November 1962 until April 1963.[10] This proposed the eventually settled 32 more empowered boroughs forming a new administrative county.

One of those basic strands is that London Government must reflect the physical fact that Greater London is a single city with a recognisable existence of its own: it is a living organism with its heart, its limbs and its lungs. The Surrey [-proposed] Plan does not recognise this important basic fact. Secondly, the Government regard it as vital that the functions that need to be exercised over the whole of Greater London should be in the hands of a body with real positive powers. In no other way can such a Government be effective.[11]

...but [in] ordinary human speech, how is it that such people can be so appalled at acknowledging that they live in what is the greatest capital city in the world?

It would be ludicrous for the Government to go to this extent to try to reorganise metropolitan government for the next half century and boggle at including in it the whole of the metropolitan continuous built-up area.[12]

I invite hon. Members on both sides to agree that, whatever may have been the merits of saying that the area of the L.C.C. was London in 1848, it is idle to say in 1962 that the frontiers are the same now. Plainly, in the more than 70 years since the L.C.C. came into existence, the whole pattern of London has been transformed.[13]

The leaders and all members of the Opposition in both houses saw the Bill as being partisan, opposed London's re-casting and celebrated its predecessor:

...we believe that it is a party political Bill. We have been told that it is "politics in the raw". It certainly is. If London County Council can be destroyed for political reasons, so can the City of London Common Council.[13]

Five Conservative MPs (for North-West Croydon, South Croydon, Carshalton, Wimbledon and East Surrey) sympathised with a petition from 20,000 to 30,000 people from Croydon and two hillside semi-rural towns not to join London. Former Labour Home Secretary James Chuter Ede, a retired Surrey magistrate and county councillor, co-led the opposition in Committee, having met residents who were all "resolutely and determinedly opposed to the Bill." He was instrumental in getting his own area, Epsom and Ewell, completely excluded. Charles Doughty, MP for East Surrey (including Coulsdon and Purley), prophesied that "A shotgun marriage of the kind proposed in the Bill between Coulsdon, Purley and [the Borough of] Croydon can never be successful...The affinities of Coulsdon and Purley go south, not to the north and east. This is a very bad part of the Bill."[13] The Bill passed, and the boundaries including this fusion, have lasted since 1 April 1965.

The Local Government Act 1985 abolished the Greater London Council and transferred its functions to the London borough councils, joint arrangements and to central government. The Inner London Education Authority continued to exist as a directly elected authority.