The historic London Tecumsehs were a professional men's baseball team in London, Ontario, Canada, that were first formed in 1868 — a merger of the Forest City Base Ball Club and the London Base Ball Club — which, according to George Railton's 1856 London directory, consisted of officers J.K. Brown, Dr. J. Wilkinson and J.D. Dalton and 22 players who practiced twice a week on the military grounds (today's Victoria Park). They were named for Shawnee chief Tecumseh.

An article in The New York Times from 1875 reports that "The Tecumseh Baseball Club, of London, Ontario, beat the Ætnas, of Detroit, the champions of Michigan, at London, Ontario, yesterday. Score, 15 to 6." This game in 1875 would have been played at the above-mentioned old fair grounds in London.

Then in 1877, the Tecumsehs moved to Tecumseh Park (today's Labatt Park) in the then-London suburb of Petersville, also known as London West.

During the 1930s, the London Tecumsehs were a men's hockey team playing in the International Hockey League, playing their home games at the now-demolished London Arena at Bathurst and Ridout streets in London, Ontario.

Adapted from the British game of rounders[citation needed] — and by extension, cricket — the game of base ball or "townball" became popular in the early 19th century in Southwestern Ontario (then Canada West or Upper Canada), New York State and New England.

The first documented evidence of a base ball game in Canada comes from a letter published in Sporting Life magazine in 1886, a letter by Dr. Adam E. Ford of Denver, Colorado, formerly of St. Marys, Ontario, and Beachville, Ontario, about a game 48 years earlier in Beachville on June 4, 1838 — Militia Muster Day.

Originally, the rules of the game were informal in nature and often modified to reflect regional preferences.

The merger of the Forest City and London Base Ball clubs to form the London Tecumsehs occurred in June 1868 with John Brown as president — a team sponsored by the Tecumseh House hotel on the southwest corner of York and Richmond streets, immediately north of today's Canadian National railway tracks, which was demolished in the 1920s.

During the early 1870s, the major rivals of the London Tecumsehs were the Guelph Maple Leafs who were sponsored by brewer/sportsman George Sleeman, proprietor of Silver Creek Brewery, and the Woodstock Young Canadians. The Guelph Maple Leafs were the first Ontario team to hire professional ball players from the United States to strengthen their team.

In addition to Englehart, the Tecumsehs' back-room movers and shakers consisted of London newspaperman Harry Gorman, Ed Moore, manager of the Tecumseh House, Richard Meredith, a future chief justice of the Supreme Court of Ontario, William Southam, who was to found Southam News and to add an egalitarian touch, Jim Jury, a janitor at the collegiate institute.

Goldsmith's first complete game with the Tecumsehs occurred on May 24, 1876, when London played Guelph before 6,000 spectators at the old Fair Grounds, a contest that London won 8–7 in 10 innings, largely due to Goldsmith's "scientific pitching", using his innovative "skew ball." (Goldsmith went on to pitch for the Troy, New York, Trojans in 1879 and the Chicago White Stockings from 1880 to 1884.)

After the military reserve was donated to the City for a public park in 1874, public protests in 1875 against the Tecumseh's use of a fenced area of the park prompted the club to move their games to the old Fair Grounds northeast of today's Central Avenue and Wellington Street, where they played until the end of the 1876 season, during which they defeated Guelph for the Canadian championship.

In 1877, the Tecumsehs joined the International Association of Professional Base Ball Players made up of London, Guelph, Ontario, and several U.S. teams, a league created as a rival to the National League.

The Association's by-laws and constitution required member teams to pay $10 to join the league (plus an additional $15 to compete for the championship) and fan admission was set at 25 cents. Visiting teams were guaranteed $75, plus half of the gate receipts when they exceeded that amount ($75).

Pitcher Candy Cummings was the International Association's first president in 1877, while he was a player with the Lynn Live Oaks in Massachusetts.

For the 1877 season, the Tecumsehs moved into the newly outfitted, 6-acre (24,000 m2) Tecumseh Park in the village of Petersville on the west side of the forks of the Thames River (now the City-owned Labatt Memorial Park) with Richard Southam, brother of William Southam, founder of the Southam newspaper chain, the team manager. (London-born George (Mooney) Gibson, catcher for the 1909 World Series Champions, the Pittsburgh Pirates, was a nephew of the Southams).

Both the London Tecumsehs and Tecumseh Park were named after the Shawnee Chief Tecumseh who fought alongside the British against the U.S. during the War of 1812. Chief Tecumseh died during the Battle of the Thames near Chatham, Ontario, in October 1813.

While the Tecumsehs were charter members of the International Association, the team (like all teams in the league) continued to play many ball games against teams in other leagues. One of the first games played in the new stadium took place on Saturday, May 5, 1877, against the Hartfords of Brooklyn, New York.

The new field was lauded for its many amenities, including a 600-seat grandstand, piped-in water for maintaining the grass and facilities for scorers, telegraph operators and reporters. London won the International Association pennant in 1877 by defeating the Pittsburgh Allegheny 5–2.

(compiled by Ray Nemec of the Society for American Baseball Research)

Although the 1878 Tecumseh home opener attracted 4,000 fans, the crowds subsequently started to drop off and the team fell into debt.

On August 22, 1878, the club folded due to insufficient patronage. 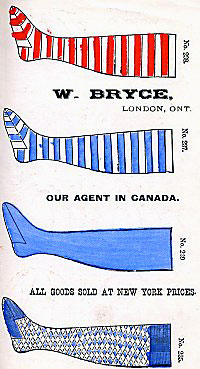 Baseball socks for sale in Bryce's Base Ball Guide 1876

The two 4-by-7-inch (100 by 180 mm) guides are considered to be the first significant publications on Canadian baseball. Bryce, a Scottish-born bookseller, news agent and sporting goods distributor in London, had a small stake in the Tecumsehs, considered by many to be the finest ball team in the entire Dominion of Canada.

During U.S. President George W. Bush's visit to the Library and Archives Canada building on November 30, 2004, he showed a special interest in these two early Canadian baseball books which were laid out for his perusal.[1]

A new Tecumseh team was resurrected in 1888 and 1889 in the International Association with Patsy Donovan one of its most notable outfield stars, and later in the 1920s in the Michigan-Ontario Baseball League. (Charlie Gehringer, a future Detroit Tigers' star and Hall of Famer, played second base for the 1924 Tecumsehs.)

On September 15, 1920, with Ty Cobb in the lineup, the Detroit Tigers defeat the London Tecumehs 5-4 before 3,000 people at Tecumseh Park in exhibition baseball. Reserved seating was $1.

The 1920 the Tecumsehs clinched the first-place pennant with 15 games to play and London led the Michigan-Ontario league in attendance, with an astonishing 100,686 people watching them play.

On May 9, 1921, under manager George Gibson, the Pittsburgh Pirates beat the London Tecumsehs 8–7 at Tecumseh Park before 3,500 people in an exhibition baseball game. Before the game, Gibson and his team is presented with a silver loving cup by the London Kiwanis Club. Gibson thrills the locals by catching the opening inning with his 1909 battery mate Babe Adams and singling and scoring a run in his lone at-bat. London Mayor Sid Little entertained the team that evening at his home.

On September 14, 1921, the Tecumsehs won the Michigan-Ontario Baseball League championship, 1-0 over Bay City, Michigan, before 1,000 people at Tecumseh Park. London scores its lone run in the first inning when third baseman Doc Shay, playing his first game of the series because of illness, triples and scores on a sacrifice fly. In three games of the series, London pitcher Frank Herbst of London allowed six hits and only one run in 33 innings. London advances against Ludington, Michigan, champions of the Central League.

On September 28, 1921, London won the best-of-seven series against Ludington 4–3, taking Game 7 10–7 at Grand Rapids, Mich. The Tecumsehs were down 3–1 in the series. A few days later, London manager Henry Buzz Wetzel was presented with a gold watch to commemorate the win. The normally reserved Wetzel speaks, saying, "Tried to do what was right and give you the best I had, and I honestly believe that the fans here have a right to be proud of their baseball team."

On May 23, 1923, Washington's pitching ace Walter Johnson is in uniform but does not pitch as the Washington Senators defeat the Tecumsehs 13–9 in an exhibition baseball game at Tecumseh Park.

American baseball historians Bill Weiss and Marshall Wright have placed the 1920 London Tecumsehs of the Michigan–Ontario League on the list of the Top 100 Minor League Baseball Teams of all-time—coming in at #52, with a record of 86 wins and 32 losses.[2]

On December 31, 1936, Tecumseh Park was donated to the City of London by the Labatt Brewing Company along with $10,000 for improvements, on the provisos that the park be renamed the "John Labatt Memorial Athletic Park" and remain a public athletic and recreational field in perpetuity.

From a sociological-historical perspective, it could be argued that the name change from Tecumseh Park to Labatt Memorial Park highlights the dramatic shift from 19th-Century colonial Canada (where the Shawnee Chief Tecumseh was immortalized throughout Canada West for siding with the British in the War of 1812) to more modern times where businesses such as the Labatt Brewing Company became very influential.

Today, Labatt Park is believed the world's oldest baseball grounds in continuous use in its original location. The park was designated under the Ontario Heritage Act in 1994, with the by-law reasons for designation amended in 1996 to include the circa-1937 Roy McKay Clubhouse, home to the London Majors of the Intercounty Baseball League.