This article needs additional citations for verification. Please help improve this article by adding citations to reliable sources. Unsourced material may be challenged and removed.Find sources: "Lord Kinloss" – news · newspapers · books · scholar · JSTOR (July 2009) (Learn how and when to remove this template message) 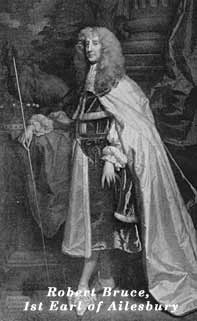 His younger brother, the third Lord, was created Earl of Elgin and Lord Bruce of Kinloss (a third separate barony) in 1633, with remainder to heirs male whatsoever, bearing the name and arms of Bruce. In 1641 he was also created Baron Bruce (designated "of Whorlton in the County of York") in the Peerage of England. He was succeeded by his son, the second Earl. He was created Baron Bruce of Skelton, Viscount Bruce and Earl of Ailesbury in the Peerage of England in 1664.

His grandson, the fourth Earl of Elgin, was the last male descendant of the first Lord Kinloss and had no male heirs of his own. He therefore chose as his heir his nephew the Hon. Thomas Brudenell, fourth son of George Brudenell, 3rd Earl of Cardigan. In 1746 he was given the additional title of Baron Bruce (designated "of Tottenham in the County of Wilts") with remainder to the Hon. Thomas. On his death in 1747 the earldom of Ailesbury, viscountcy of Bruce, Whorlton barony Bruce, and barony of Bruce of Skelton became extinct. The rest of his titles took three different lines of descent. He was succeeded in the three lordships of Bruce of Kinloss and the earldom of Elgin by his kinsman the ninth Earl of Kincardine (see Earl of Elgin and Earl of Kincardine for later history of these peerages). The Tottenham barony of Bruce passed according to the special remainder to his nephew Thomas, the second Baron. (The Earldom of Ailesbury was created anew for Thomas; see the Marquess of Ailesbury for later history of these titles).

The status of the lordship of Kinloss became uncertain. However, in 1868 the Committee for Privileges of the House of Lords decided that the rightful heir to the title was James Brydges, 3rd Duke of Chandos, as the son of Lady Mary Bruce, daughter of the fourth Earl of Elgin. However, he never assumed the title. On the death of the Duke, the dukedom became extinct.