Type of song dealing with love
This article may be expanded with text translated from the corresponding article in Macedonian. (February 2016) Click [show] for important translation instructions. Machine translation like DeepL or Google Translate is a useful starting point for translations, but translators must revise errors as necessary and confirm that the translation is accurate, rather than simply copy-pasting machine-translated text into the English Wikipedia. Do not translate text that appears unreliable or low-quality. If possible, verify the text with references provided in the foreign-language article. You must provide copyright attribution in the edit summary accompanying your translation by providing an interlanguage link to the source of your translation. A model attribution edit summary Content in this edit is translated from the existing Macedonian Wikipedia article at [[:mk:]]; see its history for attribution. You should also add the template ((Translated page)) to the talk page. For more guidance, see Wikipedia:Translation. 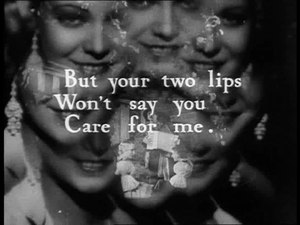 Call me darling, call me sweetheart. An accordionist plays the tune of a song, the text of which is shown.

A love song is a song about romantic love, falling in love, heartbreak after a breakup, and the feelings that these experiences bring. A comprehensive list of even the best known performers and composers of love songs would be a large order.

Love songs can be found in a variety of different music genres.

Love songs have been around for centuries and can be found in the histories and cultures of most societies, though their ubiquity is a modern phenomenon.

There are several theories about the origin of music in a general sense. According to Charles Darwin, it has to do with the choice of partner between woman and man (women choose male partners based on musical performances), and so the first music would be love music. Herbert Spencer saw music develop from a passionate eloquence, and music arise as an expression of emotions.[2]

In Ancient Greece civilization music was certainly made at weddings, and there were certainly love songs, as Erato as a muse was the protector of the love song, but our knowledge is written on myths and on pictures (as on vases) and not on written music based. It was not until the 9th century that a musical notation was developed in the Eastern Roman Empire, the neume notation, and after the addition of lines the staff was created around the 11th century, with which music is only well documented from this period. Fol. 28r of the Gruuthuuse-manuscript, with to the bottom right the song 'Egidius waer bestu bleven'

A highly controversial and startling explanation of the genesis of love songs can be found in Denis de Rougemont's "Love in the Western World".[3] De Rougemont's thesis is that the love song grew out of the courtly love songs of the troubadours, and that those songs represented a rejection of the historical Christian notion of love.

Mediavel love songs are called "Minnelied" in Middle High German, chant d'amour courtois by troubadour (Langues d'oc) or trouvère (Langues d'oïl). The (unfulfilled, unattainable) courtly love in a noble environment is therefore central. The worship of the lady is a recurring theme. A number of personae also constantly return, such as the lover who regrets being rejected by his lady, the lady who regrets the absence of her lord who is on a crusade. Generosity, nobility of character, receptivity to new experiences and attention to beauty and appearance are also common themes. The 14th century Codex Manesse includes love songs by dukes as John I, Duke of Brabant and William IX, Duke of Aquitaine.

The Gruuthuse manuscript - written in Middle Dutch - composed around 1400 in Bruges contains 147 songs, including a number of love songs with musical notation. The manuscript is from several lyricists, mostly unknown. [4][5]

Francesco Petrarca has sung his beloved Laura in 366 poems, collected in "Canzonière". The poems were set to music by, among others, Claudio Monteverdi, Orlando di Lasso and Guillaume Dufay (Vergene bella).

Within Classical music, Romanticism is most commonly associated with love music, especially romantic love music, and the love song is called a romance, although the term is not limited to vocal music.

The Oxford Dictionary of Music[6] states that "generally it implies a specially personal or tender quality". A romance can be narrative and usually amorous, but also a simple aria in an opera, as examples, Plaisir d'amour by Padre Martini and Georges Bizet's aria "Je crois entendre encore" (romance de Nadir) from the opera Les pêcheurs de perles.

Franz Schubert wrote several romances, and Giuseppe Verdi wrote "Celeste Aida" about the impossible love for an Ethiopian slave girl.[7] Poets such as Johann Wolfgang von Goethe and Federico Garcia Lorca wrote romances, which were later set to music, such as Take this waltz by Leonard Cohen.[8]

The close relationship between poems and song lyrics was underscored when Bob Dylan was awarded the Nobel Prize in Literature in 2016 for creating new poetic expressions in the great American song tradition.

A music style is considered to be "Lovers rock", a subgenre of Reggae and the "ballad", including the "blues ballad", the "soul ballad" and the "sentimental ballad". A ballad is a melodic pop song,[9] often with an intimate atmosphere. The lyrics are mostly about love. A ballad should not be confused with a 'ballad', a French verse from the 14th and 15th centuries, also used as a song in narrative form, such as the Ballad Of Davy Crockett. In the later 19th century the term was often used for any love song, especially the "sentimental ballad" in pop or rock music.

Another division within the love song is that according to theme.

The largest group are the love songs about a broken heart, they are sometimes less melodic, and sung more raw like Lucinda Williams' "Jackson" in contrast to, for example, Celine Dion's "My Heart Will Go On", the title song of the movie Titanic. The best-selling song about a broken heart is "I Will Always Love You" by Whitney Houston, written by Dolly Parton. Taylor Swift had a fondness for songs on the subject.[10]

Songs can also be about one special loved one, as in Gloria, Michelle and Angie, although it has never been clarified who they were, or Layla, which was written for Pattie Boyd.

Romantic love is often associated with 'candlelight dinners' and 'moonlit walks' so that many love songs are about 'Candlelight' and 'Moon', such as in Van Morrison's 'Moondance', 'Moon River' from the movie Breakfast at Tiffany's.

On Google Search you can find hundreds of lists with top 10, top 30 and top 100 love songs, some love songs from Billborad's top 50 (based on number of weeks and position) are:

Nobel laureate Bob Dylan wrote "Make You Feel My Love", made a world hit by Adele.

The article is based on the Dutch article "Liefdeslied"