Province of Belgium
.mw-parser-output .hidden-begin{box-sizing:border-box;width:100%;padding:5px;border:none;font-size:95%}.mw-parser-output .hidden-title{font-weight:bold;line-height:1.6;text-align:left}.mw-parser-output .hidden-content{text-align:left}This article may be expanded with text translated from the corresponding article in French. (April 2022) Click [show] for important translation instructions. View a machine-translated version of the French article. Machine translation, like DeepL or Google Translate, is a useful starting point for translations, but translators must revise errors as necessary and confirm that the translation is accurate, rather than simply copy-pasting machine-translated text into the English Wikipedia. Consider adding a topic to this template: there are already 5,262 articles in the main category, and specifying|topic= will aid in categorization. Do not translate text that appears unreliable or low-quality. If possible, verify the text with references provided in the foreign-language article. You must provide copyright attribution in the edit summary accompanying your translation by providing an interlanguage link to the source of your translation. A model attribution edit summary is Content in this edit is translated from the existing French Wikipedia article at [[:fr:Province de Luxembourg]]; see its history for attribution. You should also add the template ((Translated|fr|Province de Luxembourg)) to the talk page. For more guidance, see Wikipedia:Translation.
Province of Belgium in Wallonia

listen); Walloon: Lussimbork), also called Belgian Luxembourg,[4][5] is the southernmost province of Wallonia and of Belgium. It borders on the country of Luxembourg to the east, the French departments of Ardennes, Meuse and Meurthe-et-Moselle to the south and southwest, and the Walloon provinces of Namur and Liège to the north. Its capital and largest city is Arlon, in the south-east of the province.

It has an area of 4,459 km2 (1,722 sq mi), making it the largest Belgian province. With around 285,000 residents, it is also the least populated province, with a density of 64/km2 (170/sq mi), making it a relatively sparsely settled part of a very densely populated region, as well as the lowest density in Belgium.

It is significantly larger (71%), but much less populous than the neighbouring Grand Duchy of Luxembourg. About eighty percent of the province is part of the densely wooded Ardennes region. The southernmost region of the province is called Gaume or Belgian Lorraine (main city: Virton).

The Arelerland or Arlon region (in red on the map of arrondissements, below) bordering the neighbouring Grand-Duchy of Luxembourg has the particularity that many of its residents have historically spoken Luxembourgish, a language closely related to German, rather than the French or Walloon spoken elsewhere in the province.

The province was separated from the neighbouring Luxembourg by the Third Partition of Luxembourg, de jure in 1830–31 by the Conference of London dealing with the consequences of the Belgian Revolution of 1830, de facto in 1839, after William I, King of the Netherlands and Grand Duke of Luxembourg, agreed to its decisions and thus the province was given to the newly created Kingdom of Belgium.

An unofficial flag of the province exists, with the actual colours of Luxembourg (red, white, and blue), as well as the province's coat of arms on the foreground.[citation needed] 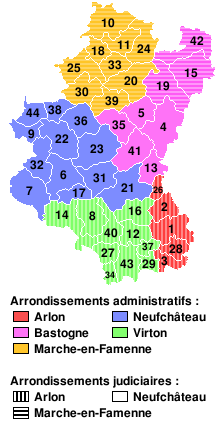 The unofficial flag of the province.

The gross domestic product (GDP) of the province was €7.0 billion in 2018, accounting for 1.5% of Belgium's economic output. GDP per capita adjusted for purchasing power was €21,800 or 72% of the EU27 average in the same year. Luxembourg was the province with the lowest GDP per capita.[6]

Wikivoyage has a travel guide for Luxembourg (Belgium).