The MJHL consists of 12 teams normally playing a 60-game schedule, with the top eight teams qualifying for the playoffs. The quarter-finals, semi-finals, and final are determined by best-of-seven series. The playoff champion is awarded the Turnbull Cup.[1] The league had two divisions, Addison and Sherwood, prior to the 2014-15 season.[2][3] Due to the COVID-19 pandemic, the league is using a three-division format and 40-game regular season schedule for each club.[4]

The winner of the MJHL playoffs (Turnbull Cup) competes against the champion from Saskatchewan for the ANAVET Cup and a berth in the Centennial Cup (formerly known as the Royal Bank Cup).[5]

The league has a rich tradition. Its first year of operation was the 1918–19 season, making it the oldest junior league in Canada.[6] It was known as the Winnipeg and District League until 1931, when it became the Manitoba Junior Hockey League. During the inaugural season, there were nine teams in two divisions, each playing a six-game schedule. The teams included the Winnipeg Pilgrims, Elmwood, Grand Trunk Pacific, Winnipeg Tigers, Young Men's Lutheran Club, Winnipeg Argonauts, Selkirk Fishermen, Weston, and Winnipeg Monarchs. Over the years, more than 200 MJHL players have gone on to the National Hockey League (NHL), and 11 of those MJHL graduates have been inducted into the Hockey Hall of Fame:

In 1955, the brothers Art and Gordon Stratton of the Winnipeg Barons set a league record for most points in a single season with 76 each. In 1957, Ray Brunel of the St. Boniface Canadiens broke it with 105.

In the early 1960s, the powerhouse Brandon Wheat Kings, built by Jake Milford, won three titles in a row, and four in five years. In 1961, goalie Ernie Wakely of the Winnipeg Braves was named Canada's outstanding junior hockey player for the month of January. In 1962, Clarence Campbell president of the NHL attended inaugural Manitoba–Saskatchewan all-star game in Winnipeg.

Goaltender Wayne Stephenson led the Winnipeg Braves to the MJHL Championship in 1965. In 1967, future Hall of Famer Bobby Clarke of the Flin Flon Bombers set league records for most goals (71), assists (112), and points (183) in a single season. Clarke led the Bombers to win the MJHL title.

The Selkirk Steelers, however opted to join the new Central Manitoba Junior Hockey League (CMJHL). The very next year, the MJHL absorbed the CMJHL, creating a North Division to house the former CMJHL teams: the Steelers, Portage Terriers, Dauphin Kings, and Kenora Muskies, who had operated out of Fort Garry the previous year. The existing teams created the South Division.[7]

On September 19, 1968, the Winnipeg Monarchs announced the signing of Hiroshi Hori, a defenceman from Japan. Hori, a high school all-star in his homeland, would spend a year with the team and then return home to pass on what he had learned. A Canadian missionary to Japan, Father Moran was behind the idea. With CAHA approval, Moran convinced the Japanese Skating Union to sponsor one player to a year in Canada. The CAHA chose Winnipeg as the site because of the added experience from watching the Canadian National Team, and the Monarchs volunteered.

On Sunday February 9, 1969, the MJHL held a special emergency meeting to discuss Butch Goring leaving the Winnipeg Jets of the WCHL and joining the Dauphin Kings. Goring played the night before in Kenora for the Kings during a regular season game. The MJHL gave the Kings approval to use Goring in regular season and playoff games. Goring was leading the WCHL in goals at the time. Monday, WCHL president Ron Butlin said a court injunction would be sought against Goring and another Jet forward Merv Haney from playing with the Dauphin Kings. Also saying the CHA would be "taking whatever action is necessary against Dauphin and the MAHA for damages." Goring and Haney would play for the Kings, all the way to the Western Memorial Cup Finals.

The Dauphin Kings were the first "dynasty" of the new MJHL, winning the league three out of four years, 1969, 1970, and 1972, and boasting such stars as Ron Low, Butch Goring, and Ron Chipperfield. The Kings went to the Western Memorial Cup final in 1969, and in 1972 recorded 40 wins, a modern-day MJHL record. Charlie Simmer of the Kenora Muskies won the scoring title in 1973, the same year the Portage Terriers were crowned National Champs, winning the Centennial Cup. In 1974, the Selkirk Steelers won the national crown, giving the MJHL back to back "Canadian Championships". It was players such as Low, Goring, Chipperfield, Simmer, Chuck Arnason, Murray Bannerman, Paul Baxter, John Bednarski, Rick Blight, Dan Bonar, Brian Engblom, Glen Hanlon, Bob Joyce, Barry Legge, Perry Miller, Chris Oddleifson, Curt Ridley, Rick St. Croix, Blaine Stoughton, and Andy Van Hellemond who gave the new MJHL its foundation.

The Selkirk Steelers dominated, between 1974 and 1987, winning eight MJHL championships, including three in a row. The 1974 Steelers were inducted into the Manitoba Hockey Hall of Fame, as were the 1973 Portage Terriers. In 1975, Jim Misener of the Dauphin Kings led the league in goals with 73, breaking Bobby Clarke's single season record of 71. In 1977, the Dauphin Kings won their fourth MJHL title in a decade, led by Misener who became the MJHL career leader in goals, assists, and points.

On April 5, 1977, MJHL commissioner Bill Addison called off the Turnbull Cup Finals between the Dauphin Kings and Kildonan North Stars, saying "No, I am not going to allow these characters an opportunity to beat on each other any longer. I am calling the series (a best-of-seven) and awarding it to Dauphin on the basis they won two of the three games completed." The decision came just hours after the two clubs had engaged in a pre-game brawl, in which two Kings players were taken to hospital and two North Stars were criminally charged. Chris Walby was convicted of common assault, and granted a conditional discharge. The CAHA was not as kind, suspending Walby for life.

Grant Ledyard led the Winnipeg South Blues to the first of four MJHL Championships in 8 years in 1982. In 1983, Mike Ridley of the St. Boniface Saints broke both Jim Misener's goal scoring record and Bobby Clarke's points record. In 95, Cory Cyrenne of the Saints was chosen Canadian Junior A Hockey League (CJAHL) Player of the Year, and the Winnipeg South Blues won their fifth championship, on their road to a second Anavet Cup, and an Abbott Cup. The 1995 Blues were inducted into Manitoba Hockey Hall of Fame. In 1998, Jedd Crumb of the Blues led the CJAHL in goals with 61.

As the twenty first century dawned, the OCN Blizzard were dominating the MJHL, winning five straight MJHL championships from 1999 to 2003. This was a record previously achieved by only the legendary Elmwood Millionaires (1927–1931). Junior Lessard of the Portage Terriers was named CJAHL Player of the Year in 2000. Blizzard goaltenders Preston McKay (1998) and Marc Andre Leclerc (2001) led the CJAHL in goals against average, and left winger Andrew Coates (2003) led in goals. In 2004, Aaron Starr of the Blizzard became the first MJHL player to lead the CJAHL in scoring with 118 points.

As the Blizzard's dynasty came to an end, the Portage Terriers began their own golden age with a trip to the MJHL finals in 2003-04. The Terriers lost the series, but laid claim to the Turnbull Cup and ANAVET Cup titles the following season. This would start a run of nine championships over fifteen seasons, plus three ANAVET Cup wins and the 2015 national championship. Since relocating to Steinbach in 2009, the Steinbach Pistons have also been a dominant club, leading the regular season in points on three occasions, winning two Turnbull Cups, and the ANAVET Cup in 2018.

The 2014-15 Terriers set a new league record for single-season winning percentage (.917) when they dominated the MJHL with a 53-3-4 record during the regular season and went undefeated in the playoffs to capture their ninth Turnbull Cup. The Terriers capped off their dream season by winning the 2015 Royal Bank Cup on home ice in Portage la Prairie.[8] The Terriers dominated again the following season, putting up an impressive 31-game winning streak on their way to a second consecutive Turnbull Cup.[9]

Once dominated by Winnipeg-based clubs, the league was down to only two in the Winnipeg Metro Region before the addition of the Winnipeg Freeze in 2020. The remainder of the teams are spread through out the province's smaller cities and towns.

In October 2011, the Neepawa Natives reported a hazing incident to Kim Davis, MJHL Commissioner. After an investigation, Davis confirmed that a 15-year-old player had come forward with allegations of sexual-based rookie hazing in the Natives' locker room. A record $5000 fine and 18 suspensions resulted from the incident. The Natives gained even more negative press by benching and refusing to release or trade the 15-year-old who brought the issue to light.[10] 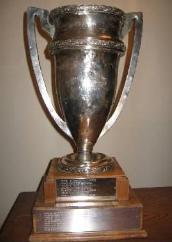 The Turnbull Memorial Trophy, or Turnbull Cup, is awarded to the Manitoba Junior 'A' hockey champion each season. The provincial championship coincides with the MJHL playoffs and all league clubs are eligible to win, even those based outside of Manitoba. Prior to the CJHL's formation, other leagues in Manitoba also periodically competed for the Turnbull Cup; in those years, a playoff series between the respective league champions determined the Turnbull Cup championship.

The trophy was donated by the Winnipeg Hockey Club in 1920 to honour Walter James "Ollie" Turnbull, a captain in the 10th Brigade Canadian Field Artillery, killed in action during the First World War.[11] The trophy underwent a major refurbishment in 2018.[12]

Since 1970-71, the Turnbull Cup/MJHL champion has played the winner of the Saskatchewan Junior Hockey League (SJHL) playoffs for the ANAVET Cup. The winner of that series earns a berth in the Centennial Cup, the national Junior 'A' championship (known as the Royal Bank Cup from 1996 to 2018).

Between 2013 and 2017, the ANAVET and Doyle Cups were replaced by the Western Canada Cup (WCC), a regional tournament that determined the two Western Canadian seeds at the national championship. No MJHL clubs captured the WCC during its five-year run; however, the Dauphin Kings and Portage Terriers as runners-up in 2014 and 2015, respectively, to capture the second Western seed at the national championship.

Since the tournament format for the Centennial Cup began in 1985, MJHL clubs have hosted national championships on three occasions: 1992 in Winnipeg, 2010 in Dauphin, and 2015 in Portage la Prairie. Portage la Prairie was also selected to host the 2020 championship which was cancelled at the onset of the COVID-19 pandemic.

Prior to the reorganization of Canadian junior hockey in 1970, the MJHL champion played for the Memorial Cup, the former Canadian Tier I Junior championship. These post-MJHL playoffs were commonly known as the Memorial Cup playoffs. For the MJHL clubs, the road was firstly the western semi-finals and finals for the Abbott Cup, and then the Memorial Cup Finals. During this 53-year era (1918–1970), MJHL clubs won 18 Abbott Cups, and 11 Memorial Cups.

Timeline of teams in the MJHL