View of the Manzano Mountains from the north 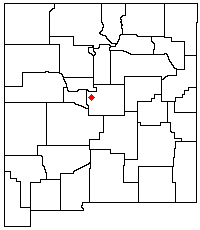 The Manzano Mountains are a small mountain range in the central part of the US State of New Mexico. They are oriented north–south and are 30 miles long.[1] The center of the range lies due east of the town of Belen. The name "Manzano" is Spanish for "apple tree"; the mountains were named for apple orchards planted at the nearby town of Manzano.[2]

The high point of the Manzano Mountains is Manzano Peak (10,098 ft, 3,078 m), at the southern end of the range. Other notable peaks include flat-topped Bosque Peak (9,610 ft, 2,929 m), near the center of the range, and the twin pyramids of Mosca Peak (9,509 ft, 2,898 m) and Guadalupe Peak (9,450 ft, 2,880 m). The last two are the most easily recognized peaks in the range as viewed from Albuquerque. Manzano Peak and Guadalupe Peak are the most dramatic in the range in terms of local relief and steepness; however, there are few cliffs in the range, as compared to the more dramatic Sandia Mountains.

The Manzano Mountains are the southern part of a larger geologic unit known as the Sandia–Manzano Mountains, which are an east-tilted fault-block range forming part of the eastern edge of the Albuquerque Basin in the Rio Grande rift. They are separated from the Sandia Mountains to the north by the "Manzanitas Mountains" and Tijeras Canyon. Both the Manzano and Sandia mountains are capped by Paleozoic sedimentary rocks, with Proterozoic metamorphic rocks making up most of the mountains' steep western faces. These include the Sevilleta metarhyolite, with an age of 1665 ±16 Ma.[4]

On September 14, 1977, a USAF Boeing EC-135 crashed into the Manzano Mountains just after takeoff from the Albuquerque International Sunport, killing all 20 people on board.[5]

Compared to the Sandias, the Manzanos are much less visited, lacking the paved road and tramway access of their northern neighbors. However, many recreational sites exist, with opportunities for picnicking, camping, mountain biking, and hiking.