Title in the Peerage of Great Britain 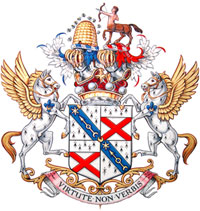 The full coat of arms of the Marquesses of Lansdowne

Marquess of Lansdowne is a title in the Peerage of Great Britain created in 1784, and held by the head of the Petty-Fitzmaurice family. The first Marquess served as Prime Minister of Great Britain.

This branch of the family descends from the Hon. John Petty-Fitzmaurice (originally John Fitzmaurice), second son of Thomas Fitzmaurice, 1st Earl of Kerry (see the Earl of Kerry for earlier history of the family), and his wife Anne, the daughter of the noted political economist Sir William Petty (whose wife had been created Baroness Shelburne and whose two sons had been created Baron Shelburne and Earl of Shelburne respectively, but who had died without heirs; see these titles for more information). In 1751 he succeeded to the estates of his maternal uncle Henry Petty, Earl of Shelburne, and assumed by Act of Parliament the surname of Petty in addition to FitzMaurice.[3] The same year he was created Baron Dunkeron and Viscount FitzMaurice in the Peerage of Ireland.[4] In 1753 the earldom held by his uncle was revived when he was made Earl of Shelburne, in the County of Wexford, in the Peerage of Ireland.[5] He later represented Wycombe in the House of Commons as a Whig. In 1760 he was created Baron Wycombe, of Chepping Wycombe in the County of Buckingham, in the Peerage of Great Britain,[6] which gave him an automatic seat in the British House of Lords.

The Earl of Shelburne was succeeded by his eldest son William Petty-FitzMaurice, 2nd Earl of Shelburne. He was a prominent statesman and served as Prime Minister of Great Britain from 1782 to 1783. The Prime Minister's brother, The Hon. Thomas FitzMaurice (1742–1793) of Cliveden, was also a fellow Member of Parliament. It was reported in 2012 that Thomas FitzMaurice's direct descendants included brothers Lieut. Osmund Fitzmaurice Bullock and Sir Christopher Bullock[7] with Sir Christopher's wife – Lady Bullock (née Barbara May Lupton) – being the second cousin of Olive Middleton (née Lupton), the great grandmother of Catherine, Duchess of Cambridge.[8][9][10][11]

In 1784, William Petty-Fitzmaurice was created Viscount Calne and Calston (present-day Calne and Calstone) in the County of Wiltshire, Earl of Wycombe, of Chepping Wycombe, and Marquess of Lansdowne, in the County of Somerset, in the Peerage of Great Britain.[12] Through his first wife Lady Sophia Carteret (1745–1771), only daughter of Robert Carteret, 3rd Earl Granville (see the Earl Granville 1715 creation), he acquired large estates, including Lansdowne Hill near Bath, from which he took his title of Marquess. However, he is better known to history under his former title of Earl of Shelburne. He sat as Whig Member of Parliament for Wycombe between 1786 and 1805. He was succeeded by his son from his first marriage to Lady Sophia Carteret, the second Marquess.

His son, John Henry Petty-Fitzmaurice, 2nd Marquess of Lansdowne, died childless and was succeeded by his half-brother, the third Marquess. He was the son of the first Marquess's second marriage to Lady Louisa FitzPatrick. Known as Lord Henry Petty from 1784 to 1809, he was one of the most influential Whig politicians of the first half of the 19th century. In a ministerial career spanning over fifty years he served as Chancellor of the Exchequer from 1806 to 1807, as Home Secretary from 1827 to 1828, as Lord President of the Council from 1830 to 1834, 1835 to 1841 and 1846 to 1852, and as Minister without Portfolio from 1852 to 1858. He twice declined to become Prime Minister and refused the offer of a dukedom from Queen Victoria in 1857. In 1818 Lord Lansdowne also succeeded his cousin as fourth Earl of Kerry. His eldest son William Petty FitzMaurice, Earl of Kerry, was Member of Parliament for Calne but predeceased his father, without male issue. Lord Lansdowne was therefore succeeded by his second son, the fourth Marquess. He had already in 1856 been summoned to the House of Lords through a writ of acceleration in his father's junior title of Baron Wycombe and served under Lord Palmerston as Parliamentary Under-Secretary of State for Foreign Affairs from 1856 to 1858. He married as his second wife Emily Jane Mercer-Elphinstone-de Flahault, 8th Lady Nairne (see the Lord Nairne), eldest daughter of the French general and statesman Charles Joseph, comte de Flahaut, and his wife Margaret Nairne, 7th Lady Nairne. He was succeeded by his eldest son from his second marriage, the fifth Marquess. Like his grandfather, he was a prominent statesman and had an equally long ministerial career. Lord Lansdowne was Governor-General of Canada from 1883 to 1888, Viceroy of India from 1888 to 1894, Secretary of State for War from 1895 to 1900, Foreign Secretary from 1900 to 1905, Co-Leader of the Conservative Party from 1911 to 1916 and also served in the war-time coalition government as Minister without Portfolio from 1915 to 1916. In 1895 he succeeded his mother as ninth Lord Nairne. His eldest son, the sixth Marquess, sat as Unionist Member of Parliament for West Derbyshire from 1908 to 1918 and was a Senator of the Irish Free State in 1922.

On his death in 1936 he was succeeded by his second but eldest surviving son, the seventh Marquess, who was killed in action in 1944 during the Second World War, unmarried. As the third and youngest brother, Lord Edward Norman Petty-Fitzmaurice, had been killed in action only a week before, the Scottish lordship of Nairne was passed on to their eldest sister Katherine (see Lord Nairne for later history of this title). Lord Lansdowne was survived in the remaining titles by his first cousin, the eighth Marquess. He was the son of Major Lord Charles George Francis Mercer Nairne Petty-Fitzmaurice (1874–1914), second son of the fifth Marquess. Born George John Charles Mercer Nairne, he assumed by Decree of the Lord Lyon the additional surnames of Petty-Fitzmaurice in 1947. Lord Lansdowne sat on the Conservative benches in the House of Lords and served as Joint Parliamentary Under-Secretary of State for Foreign Affairs from 1958 to 1962 and as Minister of State for Colonial Affairs from 1962 to 1964. As of 2014 the titles are held by his eldest son, the ninth Marquess, who succeeded in 1999.

The courtesy title for the Lord Lansdowne's eldest son and heir apparent alternates between Earl of Kerry and Earl of Shelburne.

The family seat is Bowood House, near Calne, Wiltshire. The family's former London residence was Lansdowne House in Berkeley Square. A major late-1990s/early-2000s housing development in the northwest of Calne was named Lansdowne Park after the local seat.

Extant marquessates in the peerages of Britain and Ireland
Categories
Categories: