From his debut in 1999 to 2003, Mora was known as a utility player, playing all three outfield positions, shortstop, and second base. In 2004, the Orioles made Mora their everyday third baseman, a position he occupied through 2009.

Mora was signed out of Venezuela as an amateur free agent in 1991. After spending seven years in the Astros farm system and few months in the Chinese Professional Baseball League with the Mercuries Tigers, he signed as a free agent with the Mets in 1998 and made his major league debut in the 1999 season. Mora made himself more valuable by being able to play all three outfield positions, shortstop, second base and third. 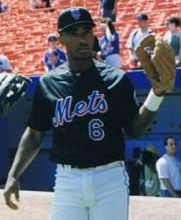 In 1999, he scored the winning run of the final game of the year for the Mets on a wild pitch by the Pirates' Brad Clontz, which propelled the Mets to a one-game playoff with Cincinnati, which they won.[1][2]

Mora became a cult hero in New York as he starred in the 1999 National League Championship Series, batting a clutch .429 with an OPS of 1.143, and throwing runners out at home plate and third base from his right field position.[3]

Mora started the year red hot for the Mets, but everything changed when shortstop Rey Ordoñez broke his arm, ending Ordoñez's season. Mora was moved to shortstop, where he struggled defensively. Criticized by the media, Mets' general manager Steve Phillips reacted by trading Mora to Baltimore on July 28, 2000, with two minor league players and Mike Kinkade for veteran shortstop Mike Bordick, which became a steal for the Orioles.[4][5]

Used as a utility player in Baltimore, Mora showed promise and hints of ability to contribute as an everyday player but struggled to break through. Things changed in 2003, when an injury-depleted Orioles team began using Mora almost exclusively in left field, and Mora responded with the best stretch of his career. He reached base in 32 straight games while using a 23-game hitting streak to temporarily become the American League batting leader.[6] Finally excelling as a hitter, Mora was chosen for his first All-Star selection. Mora's season was cut short due to injuries (a bruised wrist and a partially torn ligament in his left knee), but finished with a .317 batting average, 15 home runs, and a .418 on-base percentage in 96 games.[7]

Mora's 2003 season proved that he could be a consistent hitter at the major league level. In 2004, Mora became the Orioles' regular third baseman and enjoyed his most productive season in the majors. Mora hit a career-high .340, finishing second in the AL batting race to Ichiro Suzuki's .372 mark; led the league in on-base percentage (.419); ranked fifth in slugging average (.562) and OPS (.981); sixth in runs (111), doubles (41) and times on base (264); eighth in hits (187), and ninth in total bases (264).[7][8] His 27 home runs and 104 RBI were also career-highs, while leading his team in batting average, runs, on-base percentage, slugging average and OPS.[7] At third base, he improved and became more consistent as the season wore on. Mora finished 18th in American League MVP voting and won a Silver Slugger Award.[9]

Melvin Mora, during a break in the action, playing for Baltimore Orioles in 2006.

In 2005, Mora once again hit 27 home runs, although his batting average and on-base percentage dropped.[7] On May 19, 2006, Mora agreed to a three-year, $25 million deal that included a no-trade clause because Mora did not want to move his family to another city.[10]

On September 18, 2009, Brooks Robinson made a rare appearance at Camden Yards to honor Mora for moving into second all-time in games played at third base by an Oriole (behind only the Hall of Famer Brooks, himself).[14] He presented Mora with the third base from the game he moved into second.

Mora signed a one-year $2.35 million contract with the Arizona Diamondbacks on December 6, 2010.[20] He was expected to replace Mark Reynolds as the starting third baseman.[21] Mora missed a few days of spring training as a precautionary measure despite not having any serious injuries after his automobile was struck from behind by another vehicle on Arizona State Route 101 on March 7, 2011.[22] He was in the starting lineup on Opening Day, scoring a run while going hitless in five at-bats in a 7–6 victory over the Rockies at Coors Field on April 1.[23] His playing time eventually was limited due to the emergence of Ryan Roberts. After a 6–2 loss to the Cleveland Indians at Chase Field on June 29 in which he struck out as a pinch hitter for Zach Duke with one out and a runner on first base in the fifth inning, he was given his unconditional release effective the following day. He batted .228 with no home runs and 16 RBI in 42 games with the Diamondbacks.[7][21] He allegedly officially announced his retirement as an active player on December 29, 2011, though in mid-January, Mora corrected that claim by saying he still wished to play in 2012.[24][25]

Mora agreed to represent his native country, Venezuela, in the 2006 World Baseball Classic, but pulled out after being denied the third base position in favor of Miguel Cabrera.

When he was seven years old, his father was murdered in front of him in Venezuela in a case of mistaken identity.[26]

On July 28, 2001, Mora's wife Gisel gave birth to quintuplets at Johns Hopkins Hospital in Baltimore, Maryland. They also have an older daughter.[27] The family resides in Fallston, Maryland.[28]

In the Orioles media guide, Mora stated his most embarrassing moment as a player came in his rookie year in 1999 when, knowing little English, he thought his manager Bobby Valentine had told him to go to left field when he was actually being told to go to second base.[citation needed]

Mora was naturalized as a United States citizen in Baltimore on May 10, 2017. He holds U.S.-Venezuela dual citizenship.[29]