Meridian Junior College (MJC) was a junior college in Singapore, offering two-year pre-university courses leading up to the Singapore-Cambridge GCE Advanced Level examination. Situated in the eastern residential estate of Pasir Ris, it is the sixteenth junior college established in Singapore.

In 2005, the college hosted its official opening ceremony on 25 February, graced by Teo, and observed its first ever College Day on the 23rd of July.[citation needed]

Under Lai's leadership of, the college became a single-pointer JC (based on L1R5 admission) in less than a decade.[citation needed]

Students from Meridian Junior College are referred to as "Meridians", which reflects a close identity with the college.[3] 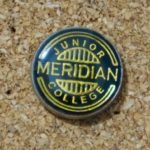 Meridian Junior College's campus include a gym, rehearsal rooms for performing arts groups (with pianos and dance studios), and a library in a 2-storey block, run by the National Library Board. The college has a fully air-conditioned hall, five lecture theatres equipped with audio-visual equipment, and a sports block and track.[citation needed]

Since 2008, students have access to the school's Integrated Virtual Learning Environment (IVLE), which allows students to discuss assignments online as well as access to academic databases such as The Economist and Science Resource Center. There is also the MJC Leisure and Learning portal where students can sign up for Organised Student Activities, submit suggestions and gain endorsement for participation in projects.[citation needed]

The list of subjects offered by Meridian Junior College is featured below.

A full listing of Co-curricular Activities offered by Meridian Junior College is featured below.