The Mexican Navy is one of the two independent armed forces of Mexico. The actual naval forces are called the Armada de México. The Secretaría de Marina (SEMAR) (English: Naval Secretariat) includes both the Armada itself and the attached ministerial and civil service. The commander of the Navy is the Secretary of the Navy, who is both a cabinet minister and a career naval officer.

The Mexican Navy's stated mission is "to use the naval force of the federation for external defense, and to help with internal order".[2] As of 2020, the Navy consists of about 68,200 men and women plus reserves,[3] over 189 ships, and about 130 aircraft.[4][5] The Navy attempts to maintain a constant modernization program to upgrade its response capability.

Given Mexico's large area of water (3,149,920 km2 (1,216,190 sq mi)) and extensive coastline (11,122 km (6,911 mi)), the Navy's duties are of great importance. Perhaps its most important on-going missions are the war on drugs and protecting PEMEX's oil wells in Campeche in the Gulf of Mexico. Another important task of the Mexican Navy is to help people in hurricane relief operations and other natural disasters.

The Mexican navy is the largest navy in Latin America, the second largest in North America and the Americas after the United States.

This section may be expanded with text translated from the corresponding article in Spanish. (December 2021) Click [show] for important translation instructions. View a machine-translated version of the Spanish article. Machine translation like DeepL or Google Translate is a useful starting point for translations, but translators must revise errors as necessary and confirm that the translation is accurate, rather than simply copy-pasting machine-translated text into the English Wikipedia. Consider adding a topic to this template: there are already 5,078 articles in the main category, and specifying|topic= will aid in categorization. Do not translate text that appears unreliable or low-quality. If possible, verify the text with references provided in the foreign-language article. You must provide copyright attribution in the edit summary accompanying your translation by providing an interlanguage link to the source of your translation. A model attribution edit summary is Content in this edit is translated from the existing Spanish Wikipedia article at [[:es:Historia de la Armada de México]]; see its history for attribution. You should also add the template ((Translated|es|Historia de la Armada de México)) to the talk page. For more guidance, see Wikipedia:Translation. Depiction of Mexican Navy Lieutenant José Azueta firing a French Hotchkiss machine gun in the defense of Veracruz during the Second U.S. intervention of the Mexican Revolution, painting at the Naval Historical Museum in Mexico City 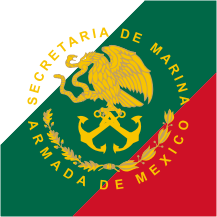 The Mexican Navy has its origins in the creation of the Ministry of War in 1821. From that year until 1939 it existed jointly with the Mexican Army in the organic ministry. Since its declaration of independence from Spain in September 1810, through the mid decades of the 19th century, Mexico found itself in a constant state of war, mostly against Spain which had not recognized its independence. Therefore, its priority was to purchase its first fleet from the U.S. to displace the last remaining Spanish forces from its coasts.[6]

The Mexican Navy has participated in many naval battles to protect and defend Mexico's interests. Some of the most important battles were:

Attempts by Spain to reconquer Mexico

The President of Mexico is commander in chief of all military forces. Day-to-day control of the Navy lies with the Navy Secretary, José Rafael Ojeda Durán.[7] In Mexico there is no joint force command structure with the army, so the Secretary reports directly to the President. The Navy has a General Headquarters and three naval forces. There are furthermore eight regions (four on the Pacific coast, three on the Mexican Gulf coast and the Región Naval Central, grouping the naval forces, based in and around the capital Mexico City, such as the 7th Naval Infantry Brigade, the Central Special Operations Group and the Air Transport Squadron), thirteen zones, and fourteen naval sectors.

The Navy is divided into three main services designated as "forces":

Other notable services include: The Naval Infantry also is responsible for 23 National Service Training Units under the responsibility of the Navy Secretary, enforcing the National Service obligation for Mexicans of teenage and young adult age.

In 2008, the Mexican Navy created its new search and rescue system, allocated in strategic ports at Pacific and Gulf of Mexico ports, to provide assistance to any ships which are in jeopardy or at risk due to mechanical failure, weather conditions or life risk to the crew. To provide such support, the Navy has ordered Coast Guard Defender class ships (two per station, and one 47-Foot Motor Lifeboat coast guard vessel). Other stations will be provided only with Defender-class boats.[9]

On April 1, 2014, SEMAR officially announced the creation of Port Protection Naval Units (Unidades Navales de Protección Portuaria: UNAPROP) which will include a marine section.[10][11] The main task of UNAPROPs is to ensure maritime surveillance and inspection.[12] The Navy offers several options for graduate studies in their educational institutions:

It is the school where future officers are trained for the General Corps of the Navy. Candidates can enter upon completing high school. Upon completion of studies, graduates obtain the degree of Sub-Lieutenant and the title of Naval Science Engineer.

This school Located in Mexico City, offers a career in medicine. Officers are trained with skills for the prevention and health care of naval personnel. By adopting a professional examination, graduates are commissioned Sub-Lieutenants.

In the Naval Engineering School, officers are responsible for the preventive and corrective maintenance of systems and electronic equipment installed on ships and installations of the Mexican Navy. This school offers career of Electronic Engineering and Naval Communications. It is located between the town of Mata Grape and Anton Lizardo, 32 km (20 mi) from the port of Veracruz.

Here the time to achieve a nursing degree lasts eight semesters. Officers are trained with the knowledge and skills necessary to enable them to assist medical personnel in caring for patients in hospitals, sanatoriums, clinics, health sections on land, aboard ships and at The Naval Medical Center.

The Naval Aviation School trains pilots for the Mexican Naval Aviation as well as staff from the Federal Preventive Police and Naval personnel from various countries of Central America. This school is located on La Paz, Baja California Sur.[13]

Located in Acapulco, members of The Navy are trained for marine search, rescue and diving. It also trains state police officers and firefighters.

The annual Navy's budget is in a one to three proportion of the national budget relative to the Mexican Army and Mexican Air Force. The Navy has a reputation for being well-run and well-organized. This reputation allows for a close relationship with the United States Navy (USN), as evidenced by the procurement of numerous former USN ships.

The Secretary of the Navy, Admiral Mariano Francisco Saynez Mendoza, announced on October 1, 2007, detailed plans to upgrade and modernize the country's naval capabilities. On the following day, La Jornada newspaper from Mexico City, disclosed the Mexican Navy plans, which are among others, to build six offshore patrol vessels (OPVs) with a length of 86 metres (282 ft), 1,680 tons and each housing a Eurocopter Panther helicopter as well as small high-speed interception boats. The budget for this project is above US$200 million.

Another project is to build 12 CB 90 HMN high speed (50 knots (93 km/h; 58 mph)) interception boats under license from a Swedish boat company Dockstavarvet to the Mexican Navy. Also, a number of fully equipped planes for surveillance and maritime patrol are being considered. Combinations of options and development are being defined.

The Mexican Navy depends upon their naval shipyards for construction and repairs of their ships. There are five shipyards located in the Gulf of Mexico and Pacific Ocean:

The Mexican Navy initiated studies to develop and construct its first missile, according to a May 2005 interview with the undersecretary of the Navy, Armando Sanchez, the missile was to have an average range of 12 to 15 kilometres (7.5 to 9.3 mi) and be able to target enemy ships and aircraft. The undersecretary added that they already had the solid propellant, and the basic design of the missile. All aspects relative to their fuselage were solved as well as the launch platforms. The Mexican Navy was developing the software to direct the missile to its target. In July 2008, the project was reported to be 80% complete. Despite this effort, the missile development was canceled in 2009 due to "problems with the propulsion system".[14]

In 2009, the Mexican Navy began operating a batch of new MPQ-64 Sentinel radars in the oil-rich Gulf of Mexico. The radar network was installed in 2007 for a trial phase while military personnel were trained to get familiar with the system. The new installations will work together with combat surface vessels that patrol the area.[15][16]

The Mexican Navy includes 60 smaller patrol boats and 32 auxiliary ships. It acquired 40 fast military assault crafts, designated CB 90 HMN, between 1999 and 2001 and obtained a production license in 2002, enabling further units to be manufactured in Mexico.

This section needs to be updated. Please help update this article to reflect recent events or newly available information. (June 2018)

For the year 2008 budget, the Mexican Congress approved a US$15 million fund to build only 17 out of the 60 combat boats requested. These ships, designated CB 90 HMN, are to increase the Mexican Navy's fast boat fleet. Additional budgets will be awarded each passing year.[42] In total, the Mexican Navy has over 189 operational ships.[4]

In January 2013, the 112th Session of US Congress authorized the transfer of the Oliver Hazard Perry-class frigates USS Curts and USS McClusky to the Mexican Navy,[43] but due to the cost of overhauling the vessels and the removal of all the weapons systems and most of the electronics and radar gear by the USN prior to transfer, this is still undecided by Mexico. The offer expired on January 1, 2016.[43]

On March 25, 2014 Beechcraft Corporation received an order of 2 T-6C+ military trainers from the Mexican Navy.[44]