Middle Tennessee Blue Raiders football program represents Middle Tennessee State University in the sport of American football. The Blue Raiders compete in the Football Bowl Subdivision (FBS) of the National Collegiate Athletic Association (NCAA) and the East Division of Conference USA (CUSA). They are coached by Rick Stockstill,[3] who started in 2006. Middle Tennessee has appeared in 12 bowl games and seven I-AA playoffs. The Blue Raiders play their home games at the Johnny "Red" Floyd Stadium which has a seating capacity of 30,788.

Middle Tennessee State University first fielded a football team in 1911 under the direction of head coach L. T. "Mutt" Weber. From 1913–1923, Alfred B. Miles led the Blue Raiders football program. The 1914 football season led by Miles was its first undefeated season, with five straight victories after a tie with Cumberland.[4][5]

Frank Faulkinberry was hired as MTSU's head coach after Miles' departure. During his tenure, the Blue Raiders compiled a record of 33–26–4. Faulkinberry was found shot to death in his garage on May 13, 1933, a suspected suicide being the cause.[6]

E. M. Waller led the Blue Raiders for two seasons and compiled a 3–14–1 record.[7] Waller resigned due to the team's struggles after two seasons.

Ernest Alley was named the next head coach of MTSU football, and in his one-season, the Blue Raiders compiled a 1–6–1 record.[9]

Succeeding Murphy as the Blue Raiders head coach was Donald Fuoss, who only lasted for one season, a 1–9 campaign in 1969[14] that resulted in his firing.

Austin Peay head coach James Donnelly was hired as MTSU's head coach in 1979. Under his leadership, the MTSU football program compiled a record of 133–80–1.[18] Donnelly is the second winningest football coach in MTSU history. Of his 20 seasons at the helm, 15 of them were winning seasons (including 12 in a row) and four of them were seasons of at least 10 wins. Donnelly resigned after a 5–5 season in 1998.

Baylor assistant coach Andy McCollum took over for Donnelly in 1999.[19] McCollum led the Blue Raiders to a 6–5 record in 2000, their first as an FBS program. In 2001, McCollum oversaw an offense that ranked fifth nationally and MTSU finished 8–3 as the runner-up behind North Texas which won the Sun Belt Conference championship. In 2005, MTSU's defense ranked ninth nationally. McCollum was fired after the 2005 season.[20] 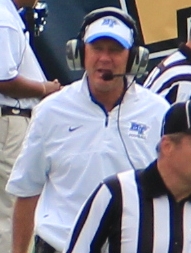 In 2006, South Carolina tight ends coach and recruiting coordinator Rick Stockstill got the head coaching job at Middle Tennessee State.[21] In his first season, Stockstill led the Blue Raiders to the program's second bowl game as well as a share of the Sun Belt Conference title. He was later that year named the conference coach of the year.

After the successful 2009 season, he turned down several offers from other schools, including Conference USA's East Carolina[28] and Memphis,[29] citing that it was not the right time to leave the Blue Raiders.[30] Stockstill has led MTSU to seven bowl games in 13 years.

In 2017, Stockstill led the Blue Raiders to a 7–6, 4–4 in C-USA play to finish for a tie in third place in the East Division. They were invited to the 2017 Camellia Bowl where they defeated Arkansas State.

Middle Tennessee has been both an independent and affiliated with multiple conferences.[33]: 128–134

As a member of Conference USA since 2013, Middle Tennessee competes in the East Division. The Blue Raiders have won one division title.

Middle Tennessee has appeared in twelve bowl games as a program, with four of those falling as a non-Division I Bowl game. The Blue Raiders have a record of 5-8. MT appeared twice in the Tangerine Bowl (now the Citrus Bowl). The first game, played January 1, 1960, against Presbyterian College, resulted in a 21–12 win. The second game, against Lamar University on December 29, 1961, was a 21–14 loss.

The Blue Raiders were invited to the Motor City Bowl in 2006 after a shared conference title with Troy University. Troy had won the conference with a tie-breaker, but MT was invited due to the Big Ten having two teams in the Bowl Championship Series (BCS) and thus being unable to fulfill their bowl contract for the Motor City Bowl. This was their first bowl game in 42 years along with their first under Division I. They played Central Michigan University in the game and were defeated 31–14.

MT finished the 2009 regular season with a 9–3 record and was invited to play in the R+L Carriers New Orleans Bowl on December 20, 2009. The team played against the University of Southern Mississippi, defeating them 42–32. This was their second bowl game since joining the FBS and first ever bowl win. Quarterback Dwight Dasher was named as the game's MVP after rushing and passing for two touchdowns each.[36]

The Blue Raiders have appeared in the I-AA playoffs seven times with a record of 6–7.

The rivalry between Middle Tennessee and Western Kentucky, is both school's oldest rivalry, as the two programs played together for several decades in the Ohio Valley Conference before both became members of the Sun Belt Conference and then transitioned to Conference USA about the same time.[39] The name comes from the fact that the two universities are separated by about 100 miles.[39]

The nickname of the Middle Tennessee athletic teams is the Blue Raiders. Female teams were long known as the Lady Raiders, but adopted the Blue Raiders name in 2007. The nickname's origin goes back to a 1934 newspaper contest. An MT football player, Charles Sarver, won $5 from Murfreesboro's The Daily News Journal with his winning entry "Blue Raiders", which he later admitted borrowing from Colgate University, whose teams were known as "Raiders" at the time. No official nickname existed prior to 1934, when teams were called "Normalites", "Teachers", and "Pedagogues".[40]

MT is represented by the colors white and royal blue, described as PMS 301 by the university.[41]

Lightning is the mascot of both the Middle Tennessee men and women's sports teams.[40]

Middle Tennessee has retired one jersey number. Morris was in the forefront of a big era of the Blue Raiders, winning three OVC championships in his tenure as quarterback.

Official record (including any NCAA imposed vacates and forfeits) against all current CUSA opponents: