The NTA Film Network was an early American television network founded by Ely Landau in 1956. The network was not a full-time television network like CBS, NBC, or ABC. Rather, it operated on a part-time basis, broadcasting films and several first-run television programs from major Hollywood studios. Despite attracting over 100 affiliate stations and the financial support of Twentieth Century-Fox (which purchased a 50% share of NTA in November 1956), the network proved unprofitable and was discontinued by 1961. The NTA Film Network's flagship station, WNTA-TV, is now WNET, one of the flagship stations of the Public Broadcasting Service (PBS).

Parent company National Telefilm Associates was founded by producers Ely Landau and Oliver A. Unger[1] in 1954 when Landau's film and television production company, Ely Landau, Inc., was reorganized in partnership with Unger and screenwriter and producer Harold Goldman.[2] NTA was the successor company to U.M. & M. TV Corporation, having purchased U.M. & M. in 1956.[3]

In October 1956, NTA launched the NTA Film Network, a syndication service which distributed both films and television programs to independent television stations and stations affiliated with NBC, CBS, or ABC (DuMont had recently gone out of the network business). The ad-hoc network's flagship station was WNTA-TV, channel 13 in New York.[4] The NTA Network was launched as a "fourth TV network", and trade papers of the time referred to it as a new television network.[5]

The NTA Film Network launched on October 15, 1956, with over 100 affiliate stations.[7] In November 1956, it was announced that 50% of the network had been purchased by Twentieth Century-Fox, which would also produce original content for the network.[7] The film network grew to 128 stations.[8] In September 1957, the network purchased KMGM-TV (now Fox O&O KMSP-TV) in Minneapolis.[9]

The following is a list of NTA Film Network affiliate stations in November 1956.[10]

The NTA Film Network broadcast both films and television programs. NTA publicized its feature films as "Spectaculars". Seen here is the 1957 advertisement for the first TV airing of Suez, starring Tyrone Power and Loretta Young.

Below is a timeline showing the airdates of the NTA Film Network's programs and later NTA offerings. The number of episodes that each series aired is given in parentheses. Some dates are tentative, as accurate records for filmed television series were not always kept. 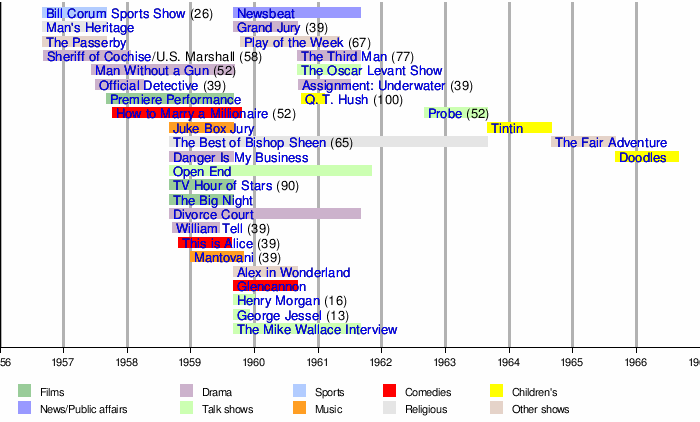 Note: This schedule was announced in May 1958; according to the announcement, 17 television stations would follow this schedule for the 1958–1959 television season; other NTA Film Network affiliates aired the programs out of pattern.[26]

In January 1959, Ely Landau was succeeded by Charles C. Barry, who took over as president of network operations. Landau continued to chair National Telefilm Associates.[27] Despite the 50% ownership of Twentieth Century-Fox, the film network never developed into a major commercial television network on a par with the "Big Three" television networks; several modern TV historians regard the NTA Film Network as a syndication service rather than a major television network.[28][29]

By 1961, WNTA-TV was losing money, and the network's flagship station was sold to the Educational Broadcasting Corporation that November. WNTA-TV became WNDT (later WNET), flagship station of the National Educational Television network, a forerunner of PBS.[30] NTA network operations did not continue without a flagship station, although parent company National Telefilm Associates continued syndication services; four television series (Probe, Tintin, The Fair Adventure, and A Day With Doodles) were syndicated by NTA between 1962 and 1966.[23]

The Los Angeles NTA Film Network station, KTTV, went on to become a founding owned and operated station of the Fox television network, which is co-owned with Twentieth Century-Fox and a part of 21st Century Fox.