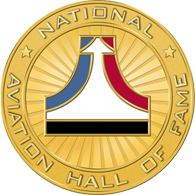 The National Aviation Hall of Fame (NAHF) is a museum, annual awards ceremony and learning and research center that was founded in 1962 as an Ohio non-profit corporation in Dayton, Ohio, United States, known as the "Birthplace of Aviation" with its connection to the Wright brothers. In 2017 the annual induction was held in Fort Worth, Texas, as the organization began rotating the ceremony among various cities.[1]

On July 14, 1964 the National Aviation Hall of Fame was chartered nationally by an act of the U.S. 88th Congress, public law 88-372 signed by President Lyndon B. Johnson. The organization continues today as a public foundation reporting annually to Congress. The primary support for this foundation comes from private, tax-deductible membership dues and contributions from individuals and organizations.

Its mission is to "honor aerospace legends to inspire future leaders" by realizing the tenacity, vision, persistence, skill and courage of the men and women of the air & space industry.

Principal activities since 1962 are the annual gala induction ceremonies for people selected for enshrinement, typically four to five per year. The selection process for induction into the National Aviation Hall of Fame involves a rigorous review and final selection process by a prestigious and knowledgeable group of aviation and space experts from around the country.

The enshrinement ceremony is often referred to as "The Oscar Night of Aviation". It is held in conjunction with the Wings of Women (WOW) mentoring program.

The National Aviation Hall of Fame is located adjacent to the National Museum of the United States Air Force. The museum covers many areas of flight including military, commercial, general and sport aviation, as well as space flight. It is open year-round with the exception of certain holidays.

The Hall has inducted the following people, arranged in alphabetical order, with their year of induction in parentheses.