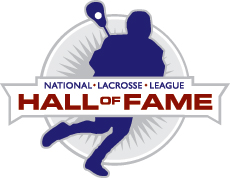 Currently, there is no building or location associated with the NLL Hall of Fame.

After a five-year hiatus, ten new members were inducted into the Hall of Fame in 2021.[4]