The nephridium (plural nephridia) is an invertebrate organ, found in pairs and performing a function similar to the vertebrate kidneys (which originated from the chordate nephridia). Nephridia remove metabolic wastes from an animal's body. Nephridia come in two basic categories: metanephridia and protonephridia. All nephridia- and kidney- having animals belong to the clade Nephrozoa. A metanephridium (meta = "after") is a type of excretory gland found in many types of invertebrates such as annelids, arthropods and mollusca. (In mollusca, it is known as the Bojanus organ.)

A metanephridium typically consists of a ciliated funnel opening into the body cavity, or coelom connected to a duct which may be variously glandularized, folded or expanded (vesiculate) and which typically opens to the organism's exterior. These ciliated tubules pump water carrying surplus ions, metabolic waste, toxins from food, and useless hormones out of the organism by directing them down funnel-shaped bodies called nephrostomes. This waste is passed out of the organism at the nephridiopore. The primary urine produced by filtration of blood (or a similarly functioning fluid) is modified into secondary urine through selective reabsorption by the cells lining the metanephridium.

The saccate metanephridia are excretory glands which function similarly to the metanephridia. They are found in the arthropods: coxal glands of arachnids, antennal (or green) glands and maxillary glands of crustaceans, etc. 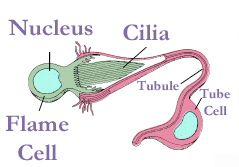 A protonephridium (proto = "first") is a network of dead-end tubules lacking internal openings, found in the phyla Platyhelminthes, Nemertea, Rotifera and Chordata (lancelets). The ends are called flame cells (if ciliated) or solenocytes (if flagellated); they function in osmoregulation (ionoregulation). The terminal cells are located at the blind end of the protonephridium. Each cell has one or more cilia and their beating inside the protonephridial tube creates an outward going current and hence a partial pressurization in the blind of the tube. Because of this, pressurization drives waste fluids from the inside of the animal, and they are pulled through small perforations in the terminal cells and into the protonephridium. The perforations in the terminal cell are large enough for small molecules to pass, but larger proteins are retained within the animal. From the bottom of the protonephridium the solutes are led through the tube, formed by the canal cells, and exits the animal from a small opening formed by the nephridiopore. Selective reabsorption of useful molecules by the canal cells occurs as the solutes pass down the tubule. Protonephridia are generally found in basal organisms such as flatworms. Protonephridia likely first arose as a way to cope with a hypotonic environment by removing excess water from the organism (osmoregulation). Their use as excretory and ionoregulatory structures likely arose secondarily.

These are excretory systems in phyla Platyhelminthes and are also called blind tubules. These tubules bear a tuft of cilia or flagellum. An organ of excretion in flatworms: a hollow cup-shaped cell containing a bunch of cilia or flagellum, whose movement draws in waste products and wafts them to the outside through a connecting tubule.