New Zealand participates in the Five Nations Passport Group, an international forum for cooperation between the passport issuing authorities in Australia, Canada, the United Kingdom, and the United States to "share best practices and discuss innovations related to the development of passport policies, products and practices".[3]

Few countries required passports before the First World War, and they were not then usually required for overseas travel. By 1900 there were occasional requests for New Zealand passports, which were personally signed by the Governor. In 1905 MP George Fowlds decided to return to Scotland for his father's 100th birthday. He decided he needed a passport when his ship was about to leave; an inconvenience both for the department and the Governor who had to sign it. A single passport covered a man and his wife and children, but did not include a photo or any personal details like age, height, or eye colour.[4] In 1909 a passport was issued to Victor Reeves Packham, agricultural chemist; see file online.[5]

In December 2000, French was removed from the biodata page of the New Zealand passport and replaced with Māori – this change was brought about by the Department of Internal Affairs, which "signals the status of Te Reo Māori as an official language of New Zealand and to give New Zealanders travelling abroad a passport that more accurately reflects their national identity".[12]

In 2001, the Department of Internal Affairs took over responsibility for the London Passport Office from the Ministry of Foreign Affairs and Trade.[13]

By 2003, only around 4% of all New Zealand passport holders still held a non-machine readable version.[14]

On 26 October 2004, New Zealand diplomatic posts stopped issuing manual passports and, on the same day, began issuing short-term machine-readable emergency travel documents for New Zealand citizens who need to travel urgently.[15][16] One of the reasons for reducing the number of non-machine readable passports in circulation was to increase the security of New Zealand passports; another was that, starting on this day, New Zealanders travelling to the United States under the Visa Waiver Program were required to enter on a machine readable passport.[17]

All passports issued from 24 April 2005 to 29 November 2015—both adult and child—have a maximum passport validity of five years as a result of the Passports Amendment Act (2005). Passports that were issued prior to 24 April 2005 remained valid until the date of expiry as stated on the biodata page. From 24 April 2005, New Zealand passports were no longer endorsed with name changes, which meant that, for example, changing to a married name required applying for a new passport.

On 23 November 2009, the Department of Internal Affairs launched a new version of the biometric passport (LA series), supplied under a contract with the Canadian Bank Note Company at a cost of just under $100 million over five years. One of the motivations for a new passport design was to ensure that it would remain difficult to produce counterfeit New Zealand passports.[21] Unlike the previous biometric passport, photographs on the biodata page are now laser engraved in black and white for extra security.[22]

On 29 May 2014, after considering the Petition of Kyle Lockwood, the Government Administration Committee recommended to the New Zealand government that ten-year passports for adults be reinstated. The committee concluded "On the evidence received, we are not convinced that the reduction in detected fraudulent passports is a result of the shorter validity period. It seems more likely to us that the introduction of biometric passports has lessened fraud and counterfeiting. The international standard among countries such as Australia, France, Germany, the United Kingdom, and the United States of America, who use similar biometric passports, is ten years. The biometric security features have led countries such as China, Canada and the Netherlands to reintroduce ten-year passports. We support the intent of the petition." [23] Law changes were passed in 2015 and since 30 November 2015, 10-year passports are available again for New Zealanders aged 16 and over; passports for children under 16 are still only valid for 5 years.

On 3 May 2021, the Department of Internal Affairs launched an updated version of the biometric passport (RA series). The RA series passports contain new and improved security features; also, te reo Māori appeared first on the cover and throughout the passport book. Owing largely to the impacts of the COVID-19 pandemic on travel, existing stock of the previous series continued to be issued until depletion.[24]

Only New Zealand citizens are entitled to be issued New Zealand passports, however, other travel documents are available from the Department of Internal Affairs for New Zealand refugees or residents who are unable to obtain passports from their home countries but need to travel; see New Zealand Refugee Travel Document and New Zealand Certificate of Identity.

The Department of Internal Affairs is responsible for issuing New Zealand passports. The Department of Internal Affairs issues passports from its offices in Auckland, Christchurch and Wellington in New Zealand, as well as overseas offices in Sydney and London. New Zealand embassies, High Commissions and consulates outside of Sydney and London are not able to issue passports, although diplomatic officers may be able to provide application forms and assist in communicating with an issuing office.

Adult passports now can be applied through online for both first time and renewals. Standard processing time is up to 10 working days plus delivery, unless an urgent or call-out service is requested. There are online fees for Australia and the UK as well as New Zealand.

As of January 2020, a standard passport costs $191 for adults and $111 for children, including delivery within New Zealand.[38]

Return travel without a passport

However, a New Zealand embassy, high commission or consulate or an Immigration New Zealand branch can request that the immigration officer at a port of entry in New Zealand not demand to see a passport of a New Zealand citizen in urgent or compassionate circumstances (e.g. death or serious illness) where there is not enough time for a New Zealand passport to be issued.[42]

The current version of New Zealand passports issued since November 2009 are black, with the New Zealand coat of arms emblazoned in silver in the centre of the front cover. The words "NEW ZEALAND PASSPORT" and "URUWHENUA AOTEAROA" are inscribed above the coat of arms in silver. The standard biometric symbol appears at the bottom of the front cover. Both the front and back covers have silver ferns embossed on the outside edge.

Regular passports issued prior to November 2009 had a navy blue cover.

Passports contain a note from the issuing state that is addressed to the authorities of all other states, identifying the bearer as a citizen of that state and requesting that he or she be allowed to pass and be treated according to international norms. The note inside New Zealand passports states:

The Governor-General in the Realm of New Zealand requests in the Name of His Majesty the King all whom it may concern to allow the holder to pass without delay or hindrance and in case of need to give all lawful assistance and protection.

Following the accession of King Charles III, the request will read the following in English:

The Governor-General in the Realm of New Zealand requests in the Name of His Majesty The King all whom it may concern to allow the holder to pass without delay or hindrance and in case of need to give all lawful assistance and protection.

The textual portions of New Zealand passports are printed in both English and Māori. (Previously English and French.) 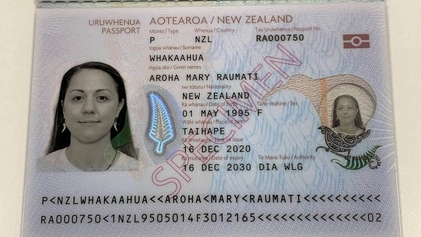 Design of the biodata page

The biodata page of the current version of the New Zealand passport includes the following data:

Under the Passports Act 1992, the Minister of Internal Affairs has the power to refuse a passport, for example, on grounds of national security.

The Minister also has the discretion to issue a passport for less than the current ten-year validity period.

In 2004, two Israelis, suspected agents working for Mossad, Eli Cara and Uriel Kelman, were convicted and jailed for attempting to obtain New Zealand passports by submitting fraudulent applications. A third suspected Mossad agent, Zev William Barkan, who was a former Israeli diplomat based in Europe was involved in stealing the identity of a tetraplegic Auckland resident to obtain a passport fraudulently in his name. A year later the Israeli government formally apologised to the New Zealand government for the actions of its citizens.

In the immediate aftermath of the 2011 Christchurch earthquake, concerns were raised that a group of Israelis may have again been attempting to fraudulently obtain New Zealand passports,[43] but scant evidence of this has been found to date.[44][45]

After Ofer Mizrahi, an Israeli national, died after being crushed by falling masonry in a parked van, he was found in possession of more than one foreign passport and the New Zealand government investigated whether he and his companions had links to Mossad.[46] There were concerns that the travellers may have been trying to infiltrate the police national computer system to gain access to information which could be used to clone New Zealand passports.[43]

His surviving travelling companions, Michal Fraidman, Liron Sade and Guy Jordan, met with Israeli officials and left New Zealand within twelve hours of the earthquake.[44] After investigations by the police and SIS, Prime Minister Key said that they found Mossad was not involved, and that: "There is, in the view of those agencies, no link between those individuals and Israeli intelligence agencies. There was no evidence found to suggest there were anything other than backpackers".[47]

As of 1 February 2020, New Zealand citizens had visa-free or visa on arrival access to 184 countries and territories, ranking the New Zealand passport 8th in terms of travel freedom according to the Henley Passport Index.[48] Additionally, Arton Capital's Passport Index ranked the New Zealand passport 6th in the world in terms of travel freedom, with a visa-free score of 162 (tied with Icelandic and Maltese passports), as of 2 December 2018.[49]

According to the statistics these are the numbers of New Zealand visitors to various countries per annum in 2015 (unless otherwise noted):