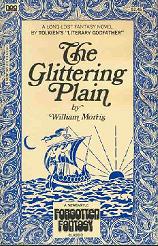 The Newcastle Forgotten Fantasy Library was a series of trade paperback books published in the United States by the Newcastle Publishing Company between 1973 and 1980. Presumably under the inspiration of the earlier example set by the Ballantine Adult Fantasy series, the series reissued a number of works of fantasy literature that had largely been forgotten, being out of print or otherwise not easily available in the United States, in durable, illustrated trade paperback form with new introductions.[1] For a number of works the Library’s editions constituted the first U.S. or first paperback edition. Together with the earlier series from Ballantine Books, it contributed to the renaissance of interest in the fantasy genre of the 1970s.[2]

The Library was produced under the editorship of Robert Reginald and Douglas Menville, editors of Forgotten Fantasy magazine, who were also responsible for several other similar series from other publishers.[3] It included works by authors such as William Morris, H. Rider Haggard, Lord Dunsany, and Leslie Barringer, among others. Projected to include a total of twenty-six fantasy classics, the Library ultimately released only twenty-four. Possibly the remaining two are represented by two non-fantasy books Newcastle published without the series designation, the first two Dr. Nikola novels by Guy Boothby: Enter, Dr. Nikola (September 1975), and Dr. Nikola Returns (March 1976).

The covers for the first eight books were generic and described by their designer Douglas Menville as "rather crude".[3] With the fourth book in the series, artists such as George Barr were engaged to produce more attractive covers at a discount, under an arrangement whereby the artist was able to retain the original paintings for private sale after the books were published.[3] The ninth book onward featured more imaginative, wrap around art, and two of the first eight (She and Allan and Gerfalcon) were later reissued in this style.