Nicolaas Bloembergen (March 11, 1920 – September 5, 2017) was a Dutch-American physicist and Nobel laureate, recognized for his work in developing driving principles behind nonlinear optics for laser spectroscopy.[1] During his career, he was a professor at Harvard University and later at the University of Arizona and at Leiden University in 1973 (as Lorentz Professor).

Bloembergen shared the 1981 Nobel Prize in Physics along with Arthur Schawlow and Kai Siegbahn because their work "has had a profound effect on our present knowledge of the constitution of matter" through the use of laser spectroscopy. In particular, Bloembergen was singled out because he "founded a new field of science we now call non-linear optics" by mixing "two or more beams of laser light... in order to produce laser light of a different wave length" and thus significantly broaden the laser spectroscopy frequency band.[2]

Bloembergen was born in Dordrecht on March 11, 1920, where his father was a chemical engineer and executive.[2] He had five siblings, with his brother Auke later becoming a legal scholar.[3] In 1938, Bloembergen entered the University of Utrecht to study physics. However, during World War II, the German authorities closed the university and Bloembergen spent two years in hiding.[2]

Six weeks before his arrival, Purcell and his graduate students Torrey and Pound discovered nuclear magnetic resonance (NMR).[4] Bloembergen was hired to develop the first NMR machine. At Harvard he attended lectures by Schwinger, Van Vleck, and Kemble.[2] Bloembergen's NMR systems are the predecessors of modern-day MRI machines, which are used to examine internal organs and tissues.[7] Bloembergen's research on NMR led to an interest in masers, which were introduced in 1953 and are the predecessors of lasers.[8]

Bloembergen returned to the Netherlands in 1947, and submitted his thesis Nuclear Magnetic Relaxation at the University of Leiden.[9] This was because he had completed all the preliminary examinations in the Netherlands, and Cor Gorter of Leiden offered him a postdoctoral appointment there.[9] He received his Ph.D. degree from Leiden in 1948, and then was a postdoc at Leiden for about a year.[2]

In 1949, he returned to Harvard as a Junior Fellow of the Society of Fellows.[5] In 1951, he became an associate professor; he then became Gordon McKay Professor of Applied Physics in 1957; Rumford Professor of Physics in 1974; and Gerhard Gade University Professor in 1980.[10] In 1990 he retired from Harvard.[10]

Bloembergen was a member of the Board of Sponsors of the Bulletin of the Atomic Scientists and Honorary Editor of the Journal of Nonlinear Optical Physics & Materials.[12]

By 1960 while at Harvard, he experimented with microwave spectroscopy.[8] Bloembergen had modified the maser of Charles Townes,[13] and in 1956, Bloembergen developed a crystal maser, which was more powerful than the standard gaseous version.[9]

With the advent of the laser, he participated in the development of the field of laser spectroscopy, which allows precise observations of atomic structure using lasers. Following the development of second-harmonic generation by Peter Franken and others in 1961, Bloembergen studied how when one bombards matter with a focused and high-intensity beam of photons, a new structure of matter is revealed. This he termed the study of nonlinear optics. In reflection to his work in a Dutch newspaper in 1990, Bloembergen said: "We took a standard textbook on optics and for each section we asked ourselves what would happen if the intensity was to become very high. We were almost certain that we were bound to encounter an entirely new type of physics within that domain".[7]

From this theoretical work, Bloembergen found ways to combine two or more laser sources consisting of photons in the visible light frequency range to generate a single laser source with photons of different frequencies in the infrared and ultraviolet ranges, which extends the amount of atomic detail that can be gathered from laser spectroscopy.[8]

He was awarded the Lorentz Medal in 1978.[13] He received the Bijvoet Medal of the Bijvoet Center for Biomolecular Research of Utrecht University in 2001.[14]

Bloembergen shared the 1981 Nobel Prize in Physics with Arthur Schawlow, along with Kai Siegbahn. The Nobel Foundation awarded Bloembergen and Schawlow "for their contribution to the development of laser spectroscopy".[13][15]

Bloembergen met Huberta Deliana Brink (Deli) in 1948 while on vacation with his university's Physics Club. She was able to travel with Bloembergen to the United States in 1949 on a student hospitality exchange program; he proposed to her when they arrived in the States, and were married by 1950 on return to Amsterdam.[16] They were both naturalized as citizens of the United States in 1958.[10] They had three children.[16]

Bloembergen died on September 5, 2017, at an assisted living facility in his hometown Tucson, Arizona of cardiorespiratory failure, at the age of 97.[17][18][19]

On March 11, 2020, the day of Bloembergen's 100th birthday, a team of researchers at the University of New South Wales published an article in Nature, demonstrating for the first time the successful coherent control of the nucleus of a single atom using only electric fields, an idea first proposed by Bloembergen back in 1961.[22][23][24][25] 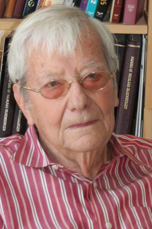