This article needs additional citations for verification. Please help improve this article by adding citations to reliable sources. Unsourced material may be challenged and removed.Find sources: "Nirmala Deshpande" – news · newspapers · books · scholar · JSTOR (October 2015) (Learn how and when to remove this template message)

Nirmala Deshpande (19 October 1929 – 1 May 2008) was a noted Indian social activist who had embraced Gandhian philosophy. She devoted her adult life to promotion of communal harmony and service to women, tribal people, and the dispossessed in India.[1][2]

She was awarded Padma Vibhushan, the second highest civilian award of India in 2006.[3] and was awarded Sitara-e-Imtiaz posthumously by Pakistan in 2010[4]

Deshpande was born to Vimala (विमला) and the Marathi writer Purushottam Yashwant Deshpande (पुरुषोत्तम यशवंत देशपांडे) in Nagpur on 19 October 1929. Her father was the recipient of a Sahitya Akademi Award in 1962 for his work in Marathi Anamikachi Chintanika (अनामिकाची चिंतनिका). 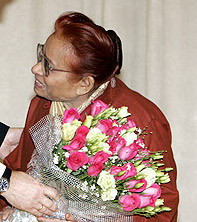 Deshpande joined Vinoba Bhave's Bhoodan movement in 1952. She undertook a 40,000-km journey on foot --padayatra—across India to carry Gandhi's message of Grām Swarāj. She recognized that it was difficult to practice Gandhian principles, yet believed that doing so was the only way towards a truly democratic society.[6]

Deshpande was known to be the spirit behind peace marches in Punjab and Kashmir when violence was at its peak in those states. Her peace mission to Kashmir in 1994 and her initiative in organizing India-Pakistan meet in 1996 were her two major public service achievements.[7] The Tibetan cause against Chinese suppression was also close to her heart.

She served as the president of a historical organization i.e. Harijan Sevak Sangh from June 1983 to till her death. She was involved or associated with many other social organizations and bodies. And also, she founded Akhil Bharat Rachnatmak Samaj that won the National Communal Harmony Award in 2004.[8]

In 2006, Deshpande championed clemency for Afzal Guru, who had been convicted of a terrorist attack on Indian Parliament in 2001. (The attack had resulted in the death of 13 people.)

Deshpande visited many cities in the United States of America on a tour organized by a prominent Indian American from Lansing, Michigan in the last few years of her life. She was member of a Rajya Sabha, when she died in her sleep in the early hours of 1 May 2008, in New Delhi at the age of 79.[5]

She continually worked for harmony between India and Pakistan. Even her mortal remains were immersed in Indus river of Sindh province in Pakistan.[4]

Deshpande authored several novels in Hindi, "Seemant", on the theme of women's liberation, and "Chimlig", based on Chinese cultural ethos, (one of which got a national award), some plays, and travelogues. She also wrote a commentary on Isha Upanishad and a biography of Vinoba Bhave.

She also founded a magazine Nityanutan and started its publishing since 1985. This magazine was dedicated to world peace and non violence and was one of the most effective magazine of carrying thoughts of non violence and peace. After her death, magazine is being published every month through crowd funding by one of her close associate Ram Mohan Rai, a social activist from Panipat (haryana).[9]

Deshpande received the Rajiv Gandhi National Sadbhavana Award (2005) and the Padma Vibhushan title in 2006.[11] She was a nominee for the Nobel peace prize in 2005.

She was conferred the Sitara-i-Imtiaz, one of Pakistan's third highest civilian honours, on 13 August 2009; the eve of Pakistan's Independence Day.[12]

On her name, a small museum[9][13] was established in Panipat (Haryana) with efforts of Ram Mohan Rai. This museum is like an honor and tribute and includes her belongings.