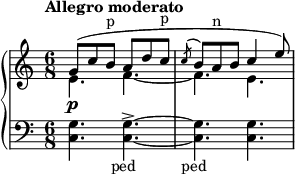 A nonchord tone (NCT), nonharmonic tone, or embellishing tone is a note in a piece of music or song that is not part of the implied or expressed chord set out by the harmonic framework. In contrast, a chord tone is a note that is a part of the functional chord (see: factor (chord)). Non-chord tones are most often discussed in the context of the common practice period of classical music, but they can be used in the analysis of other types of tonal music as well, such as Western popular music.

Over time, some musical styles assimilated chord types outside of the common-practice style. In these chords, tones that might normally be considered nonchord tones are viewed as chord tones, such as the seventh of a minor seventh chord. For example, in 1940s-era bebop jazz, an F♯ played with a C 7 chord would be considered a chord tone if the chord were analyzed as C7(♯11). In European classical music, "[t]he greater use of dissonance from period to period as a result of the dialectic of linear/vertical forces led to gradual normalization of ninth, eleventh, and thirteenth chords [in analysis and theory]; each additional non-chord tone above the foundational triad became frozen into the chordal mass."[2]

A 2-3 suspension in Lassus's Beatus vir in sapientia, mm. 23–24, showing the preparation, suspension (a type of nonchord tone), and resolution.

Chord and nonchord tones are defined by their membership (or lack of membership) in a chord: "The pitches which make up a chord are called chord-tones: any other pitches are called non-chord-tones."[3] They are also defined by the time at which they sound: "Nonharmonic tones are pitches that sound along with a chord but are not chord pitches."[4] For example, if an excerpt from a piece of music implies or uses a C-major chord, then the notes C, E and G are members of that chord, while any other note played at that time (e.g., notes such as F♯) is a nonchord tone. Such tones are most obvious in homophonic music but occur at least as frequently in contrapuntal music.

According to Music in Theory and Practice, "Most nonharmonic tones are dissonant and create intervals of a second, fourth or seventh",[4] which are required to resolve to a chord tone in conventional ways. If the note fails to resolve until the next change of harmony, it may instead create a seventh chord or extended chord. While theoretically in a three-note chord, there are nine possible nonchord tones in equal temperament, in practice nonchord tones are usually in the prevailing key. Augmented and diminished intervals are also considered dissonant, and all nonharmonic tones are measured from the bass note, or lowest note sounding in the chord except in the case of nonharmonic bass tones.[4]

Nonchord tones are categorized by how they are used. The most important distinction is whether they occur on a strong or weak beat and are thus either accented or unaccented nonchord tones.[4] They are also distinguished by their direction of approach and departure and the voice or voices in which they occur and the number of notes they contain.

A portamento is the late Renaissance precursor to the anticipation,[5] though today it refers to a glissando.

A neighbor tone (NT) or auxiliary note (AUX) is a nonchord tone that passes stepwise from a chord tone directly above or below it (which frequently causes the NT to create dissonance with the chord) and resolves to the same chord tone:

The German term Nebennote is a somewhat broader category, including all nonchord tones approached from the main note by step.[6]

An escape tone (ET) or echappée is a particular type of unaccented incomplete neighbor tone that is approached stepwise from a chord tone and resolved by a skip in the opposite direction back to the harmony.

A passing tone (PT) or passing note is a nonchord tone prepared by a chord tone a step above or below it and resolved by continuing in the same direction stepwise to the next chord tone (which is either part of the same chord or of the next chord in the harmonic progression).

A tone that sits between two chord tones and is between them.

A neighbour tone is where you step up or down from a note (or chord tone) and then move back to the original note.[7]

Endeavor, moreover, to introduce suspensions now in this voice, now in that, for it is incredible how much grace the melody acquires by this means. And every note which has a special function is rendered audible thereby.

A suspension (SUS) (sometimes referred to as a syncope[9]) occurs when the harmony shifts from one chord to another, but one or more notes of the first chord (the preparation) are either temporarily held over into or are played again against the second chord (against which they are nonchord tones called the suspension) before resolving downwards to a chord tone by step (the resolution). The whole process is called a suspension as well as the specific nonchord tone(s).

Suspensions must resolve downwards. If a tied note is prepared like a suspension but resolves upwards, it is called a retardation. Common retardations include 2–3 and 7–8 retardations.

Decorated suspensions are common and consist of portamentos or double eighth notes, the second being a lower neighbor tone.

A chain of suspensions constitutes the fourth species of counterpoint; an example may be found in the second movement of Arcangelo Corelli's Christmas Concerto. 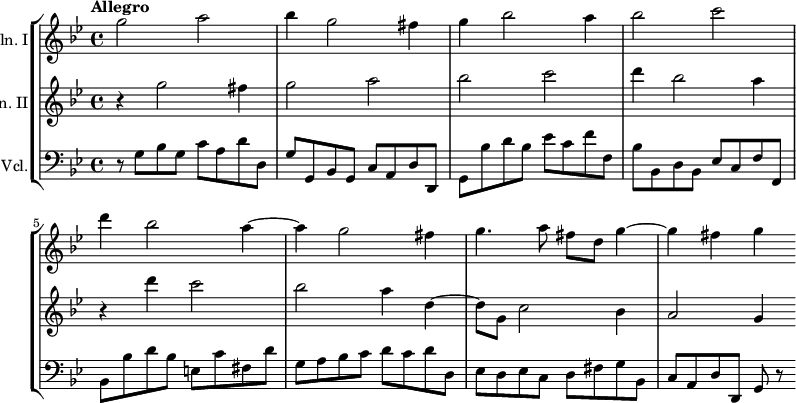 An appoggiatura (APP) is a type of accented incomplete neighbor tone approached skip-wise from one chord tone and resolved stepwise to another chord tone ("overshooting" the chord tone).

Nonharmonic bass notes are bass notes that are not a member of the chord below which they are written. Examples include the Elektra chord.[11] An example of a nonharmonic bass from the third movement of Stravinsky's Symphony of Psalms.[12]

Another form of nonchord tone is a pedal point or pedal tone (PD) or note, almost always the tonic or dominant, which is held through a series of chord changes. The pedal point is almost always in the lowest voice (the term originates from organ playing), but it may be in an upper voice; then it may be called an inverted pedal. It may also be between the upper and lower voices, in which case it is called an internal pedal.