This article needs additional citations for verification. Please help improve this article by adding citations to reliable sources. Unsourced material may be challenged and removed.Find sources: "Octave Chanute" – news · newspapers · books · scholar · JSTOR (March 2009) (Learn how and when to remove this template message)

Octave Chanute (February 18, 1832 – November 23, 1910) was a French-American[1] civil engineer and aviation pioneer. He provided many budding enthusiasts, including the Wright brothers, with help and advice, and helped to publicize their flying experiments. At his death he was hailed as the father of aviation and the initial concepts of the heavier-than-air flying machine.[2]

Born in Paris, Chanute was the son of Elise and Joseph Chanut, professor at the Collège de France. He emigrated with his father to the United States of America in 1838, when the former was named Vice-President at Jefferson College in Louisiana. Octave attended private schools in New York.

Octave Chanute began his training as a budding civil engineer in 1848.

He was widely considered brilliant and innovative in the engineering profession. During his career he designed and constructed the United States' two biggest stockyards, Chicago Stock Yards (1865) and Kansas City Stockyards (1871). He designed and built the Hannibal Bridge with Joseph Tomlinson and George S. Morison, which was the first bridge to cross the Missouri River in Kansas City, Missouri, in 1869 and established Kansas City as the dominant city in the region. He designed many other bridges during his railroad career, including the Illinois River rail bridge at Chillicothe, Illinois,[3] the Genesee River Gorge rail bridge near Portageville, New York (now in Letchworth State Park), the Sibley Railroad Bridge across the Missouri River at Sibley, Missouri, across the Mississippi River at Fort Madison, Iowa, and the Kinzua Bridge in Pennsylvania.

Chanute also established a procedure for pressure-treating wooden railroad ties with an antiseptic that increased the wood's lifespan in the tracks. Establishing the first commercial plants, he convinced railroad men that it was commercially feasible to make money by spending money on treating ties to extend their service time and reduce replacement costs. As a method to monitor the longevity of railroad ties and other wooden structures, he introduced the railroad date nail in the United States.

Chanute retired from the Erie Railway in 1883 to become an independent engineering consultant.

Chanute and his 1896 biplane hang glider, a trailblazing design adapted by the Wright brothers[4]

A twelve-winged glider of Chanute's design, prepared for launch from the dunes of Miller Beach in 1896. William Avery at the St. Louis World's Fair in 1904, about to launch a glider designed by Chanute.

...let us hope that the advent of a successful flying machine, now only dimly foreseen and nevertheless thought to be possible, will bring nothing but good into the world; that it shall abridge distance, make all parts of the globe accessible, bring men into closer relation with each other, advance civilization, and hasten the promised era in which there shall be nothing but peace and good-will among all men.[5]

Chanute became interested in aviation after watching a balloon ascend in Peoria, Illinois, in 1856. When he retired from his railroad career in 1883, he decided to devote some leisure time to furthering the new science of aviation. Applying his engineering background, Chanute collected all available data from flight experimenters around the world and combined it with the knowledge gathered as a civil engineer in the past. He published his findings in a series of articles in The Railroad and Engineering Journal from 1891[6] to 1893, which were then re-published in the influential book Progress in Flying Machines in 1894.[7] This was the most systematic global survey of fixed-wing heavier-than-air aviation research published up to that time.

At the World's Columbian Exposition in Chicago in 1893, Chanute organized in collaboration with Albert Zahm a highly successful International Conference on Aerial Navigation.

Chanute was too old to fly himself, so he partnered with younger experimenters, including Augustus M. Herring and William Avery. In 1896 Chanute, Herring, and Avery tested a design based on the work of German aviation pioneer Otto Lilienthal, as well as hang gliders of their own design in the dunes along the shore of Lake Michigan near the town of Miller Beach, Indiana, just east of what became the city of Gary.[2] These experiments convinced Chanute that the best way to achieve extra lift without a prohibitive increase in weight was to stack several wings one above the other, an idea proposed by the British engineer Francis Wenham in 1866 and realized in flight by Lilienthal in the 1890s. Chanute introduced the "strut-wire" braced wing structure that was used in powered biplanes of the future, not seriously challenged until the pioneering efforts of Hugo Junkers to develop all-metal cantilever airframe technology without external bracing from 1915 onwards. Chanute based his "interplane strut" concept on the Pratt truss, which was familiar to him from his bridge-building work. The Wright brothers based their glider designs on the Chanute "double-decker," as they called it. A new design of a biplane glider was developed and flown in 1897.

Chanute corresponded with many aviation pioneers, including Otto Lilienthal, Louis Mouillard, Gabriel Voisin, John J. Montgomery, Louis Blériot, Ferdinand Ferber, Lawrence Hargrave, and Alberto Santos Dumont. In 1897 he started a correspondence with British aviator Percy Pilcher. Following Chanute's ideas, Pilcher built a triplane, but he was killed in a glider crash in October 1899 before he could attempt to fly it.

Chanute was in contact with the Wright brothers starting in 1900 when Wilbur wrote to him after reading Progress in Flying Machines. Chanute helped to publicize the Wright brothers' work and provided consistent encouragement, visiting their camp near Kitty Hawk, North Carolina, in 1901, 1902, and 1903. The Wrights and Chanute exchanged hundreds of letters between 1900 and 1910.[8]

Chanute freely shared his knowledge about aviation with anyone who was interested and expected others to do the same, although he did encourage colleagues to patent their inventions. His open approach led to friction with the Wright brothers, who believed their ideas about aircraft control were unique and refused to share them. Chanute did not believe that the Wright flying machine patent, premised on wing warping, could be enforced and said so publicly, including a newspaper interview in which he said, "I admire the Wrights. I feel friendly toward them for the marvels they have achieved, but you can easily gauge how I feel concerning their attitude at present by the remark I made to Wilbur Wright recently. I told him I was sorry to see they were suing other experimenters and abstaining from entering the contests and competitions in which other men are brilliantly winning laurels. I told him that in my opinion they are wasting valuable time over lawsuits which they ought to concentrate in their work. Personally, I do not think that the courts will hold that the principle underlying the warping tips can be patented."[9] The friendship was still impaired when Chanute died, but Wilbur Wright took the opportunity to attend Chanute's memorial service at the family's home. Wright wrote a eulogy that was read at the Aero Club meeting in January 1911.

When the Aero Club of Illinois was founded on February 10, 1910, Chanute served as its first president until his death.[10][11] The town of Chanute, Kansas,[12] is named after Chanute (3 small towns in southeast Kansas were vying for the railroad's land office and Chanute suggested that they incorporate, which would make the larger town more attractive to the railroad - it worked), as is the former Chanute Air Force Base near Rantoul, Illinois, which was decommissioned in 1993. The former base, now turned to peacetime endeavors, includes the Octave Chanute Aerospace Museum, detailing the history of aviation and of Chanute Air Force base.

In 1902, the Western Society of Engineers began to present the Octave Chanute Award for papers of merit on engineering innovations. From 1939 to 2005, the American Institute of Aeronautics and Astronautics presented the Chanute Flight Award for an outstanding contribution made by a pilot or test personnel to the advancement of the art, science, and technology of aeronautics.

In 1974, Chanute was inducted into the International Air & Space Hall of Fame.[13]

In 1978, the U.S. Postal Service commemorated Octave Chanute with a pair of 21-cent airmail stamps.

In 1996, the National Soaring Museum honored the 100th anniversary of the glider flying experiments in the sand dunes along Lake Michigan as National Landmark of Soaring No. 8.

The Gary Bathing Beach Aquatorium, in Gary, Indiana, houses a museum dedicated to both Octave Chanute and the Tuskegee Airmen. The historic bathing pavilion was designed by architect George Washington Maher.

He is present in the Frieze of American History, in the Capitol Rotunda, Washington DC. 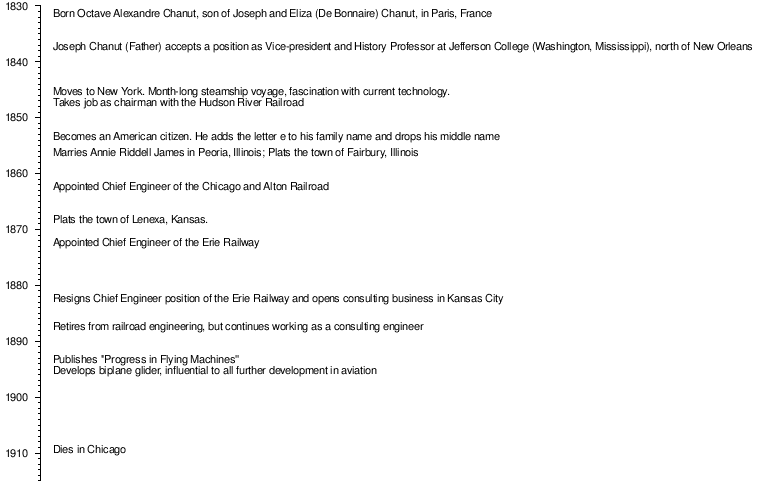