Omicron Delta Kappa (ΟΔΚ), also known as The Circle and ODK, is one of the most prestigious honor societies in the United States with chapters at more than 300 college campuses. It was founded December 3, 1914, at Washington and Lee University in Lexington, Virginia, by 15 student and faculty leaders. The society recognizes achievement in five areas: scholarship; athletics; campus and community service, social or religious activities, and campus government; journalism, speech and the mass media; and creative and performing arts. Some circles of ΟΔΚ are quasi-secret, in that newly selected members remain undisclosed for some time.

Membership in the Omicron Delta Kappa Society is regarded as one of the highest collegiate honors that can be awarded, in the tradition of Phi Kappa Phi and Phi Beta Kappa. To be selected as a member of ΟΔΚ, one must stand among the top 35 percent of all students at that particular institution and hold a leadership role in one of the society's five areas of recognition. 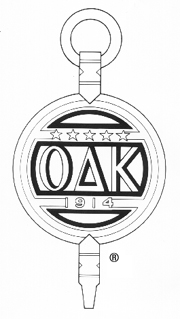 On the evening of December 3, 1914, the Omicron Delta Kappa Society was founded by fifteen men who gathered in a small office on the third floor of Reid Hall on the campus of Washington and Lee University. J. Carl Fisher first introduced the idea of creating such a society to a close friend, Rupert Latture. The two soon included mutual friend William Brown in the discussion, and thus these three are referred to as the principal founders of the society. Together with three faculty members, including the president of the University and the dean of Engineering, they gradually selected nine others to join them. The complete list of the fifteen founders is as follows.[1] The 15 founders of the Omicron Delta Kappa Society

All 15 men were prominent leaders on campus, and they rallied around the idea that all-around leadership in college should be recognized, that representative men in all phases of college life should cooperate in worthwhile endeavor, and that outstanding students and faculty should affiliate in the spirit of mutual interest and understanding. The founders intended that ΟΔΚ not be yet another society in which members would simply earn a societal Key and then be done. Members of ΟΔΚ would remain active as leaders, in upholding spiritual and moral values, and in rendering service to the campus and community. Reid Hall, the birthplace of The Circle

The founders decided that The Circle would be kept a complete secret until keys could be designed and produced. The keys arrived shortly past the winter holiday, and each man first wore his key on the 15th of January in 1915. The student newspaper, the Ring-Tum Phi, broke the news in the issue dated January 12, 1915 of a new society to be known as "The Circle," with the secret significance of its three Greek letters known only to its members.[2][3]

Purpose of the Society

The Purpose of the Society is threefold:

Only men could become members of Omicron Delta Kappa in the first 60 years of its existence. At the 1970 and 1972 National Conventions, the University of Alabama Circle introduced an amendment to the National Constitution to admit women into the Society. In June 1972, Title IX of the "Education Amendments Act of 1972" prohibited sex discrimination in federally assisted educational programs and amended parts of the Civil Rights Act of 1964. Professional and honor fraternities were included in Title IX. The Special Committee on the Possible Role of Women met in January 1973 and recommended changes to the National Constitution that would abolish segregation based on gender within the Society. On March 12, 1974. the National Convention convened in New Orleans and approved the initiation of women into the Society. On that date, the first women members were recognized by the Society. They were the Carolyn Julia Kucinski and Diane Christine Ragosa of the Newark College of Engineering Circle, and Robbie Lynn Cooney, Maria Dolores Delvalle, Roxane R. Dow, Catherine Ann Rohrbacher, Karen Diane Janzer, Linda Ann Touten, Martha Gwyn Van Deman, and Cathy Sue Welch of the University of South Florida Circle.

Omicron Delta Kappa had been a member of the ACHS since March 30, 1930, but resigned that membership in 2005. Today it participates in a more loosely coordinated lobbying association of four of the nation's oldest and most prestigious honor societies, all independent, called the Honor Society Caucus. Its members include Phi Beta Kappa, Phi Kappa Phi, Sigma Xi, and Omicron Delta Kappa.[5]

Relationship with Mortar Board

A similar honorary society, for exceptionally outstanding women leaders, known as Mortar Board, had been established just a few years after ODK, in 1918, with many similar ideals and purposes. With the passage of Title IX in 1972, each of those two societies was then required to accept candidates of either gender into its membership. As a result, the two organizations found themselves competing to tap many of the same distinguished students, and those formerly complementary societies became rivals at many institutions, perhaps fiercely so during membership selection, while more congenially so during the rest of the year, as the two rivaled one another in service, athletics, or other campus activities.

Unlike the college honor societies that accept all potential members who meet the selection criteria and pay the required fees, O∆K chooses only a highly select group from a pool of potential and qualified students through a process known as tapping. Eligibility for membership in O∆K requires at least sophomore academic standing. Unlike Phi Beta Kappa, which limits membership to the liberal arts and sciences, O∆K contemplates candidates from every field of study who distinguish themselves as outstanding leaders in at least one of the five areas celebrated by O∆K: scholarship; athletics; campus and community service, social or religious activities, and campus government; journalism, speech and the mass media; and creative and performing arts. Members may be chosen either annually or semi-annually depending on the tradition of each individual circle. The number of candidates tapped each year is limited to thirty five percent of the undergraduate population, but most circles limit membership to fewer than the top one quarter of one percent of the students on their respective campuses.

Once a circle votes on who will be tapped for membership, it withholds that secret from all but those few chosen for initiation. Once tapped, each candidate must maintain the secret until the circle reveals it to the campus and community in a public ceremony, only after the circle has initiated the new members into the bonds of the society through its private ritual. At some institutions, such as the University of Missouri, with several such elite societies that tap new members, the public revelations are all held in conjunction, in an annual ceremonial Tap Day celebration on campus.

Omicron Delta Kappa uses the term circle to indicate chapters. As of April 20, 2022, 427 circles have been chartered. The practice of designating circles with Greek letter names was abandoned in 1949. Members who have died are said to have entered the Eternal Circle.

The Omicron Delta Kappa fountain on the campus of the University of Maryland, College Park honors ODK members of the campus's chapter, including honorary member Franklin D. Roosevelt.