This article relies too much on references to primary sources. Please improve this by adding secondary or tertiary sources. (February 2008) (Learn how and when to remove this template message)

The Organisation for Joint Armament Cooperation (French: Organisation Conjointe de Coopération en matière d'ARmement; OCCAR) is a European intergovernmental organisation that facilitates and manages collaborative armament programmes through their lifecycle between the nations of Belgium, France, Germany, Italy, Spain, and the United Kingdom. 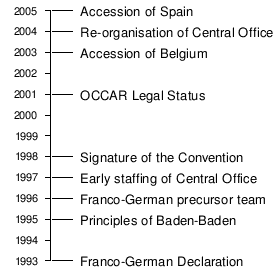 OCCAR was established on 12 November 1996 by the Defence Ministers of France, Germany, Italy and the United Kingdom. Legal status was not achieved, however, until January 2001 when the parliaments of the four founding nations ratified the OCCAR Convention. Other European nations may join OCCAR, subject to their actual involvement in a substantive collaborative equipment programme involving at least one OCCAR partner and ratification of the OCCAR Convention. Belgium and Spain joined the organisation in respectively 2003 and 2005.

The highest decision-making body within OCCAR as corporate organisation is the Board of Supervisors (BoS). Each OCCAR programmes is supervised by a Programme Board (strategic decisions) and a Programme Committee (operational decisions). The programmes are executed by the OCCAR Executive Administration (OCCAR-EA) in accordance with the decisions of the supervisory bodies. OCCAR-EA is headed by the OCCAR Director (Matteo Bisceglia since September 2019) and consists of a Central Office and the Programme Divisions. OCCAR-EA employs over 300 staff members.

The 14 programmes currently managed by OCCAR are the following: The participation in European defence organisations