Our Lady of Walsingham is a title of Mary, mother of Jesus venerated by Roman Catholics, Western Rite Orthodox Christians, and some Anglicans associated with the Marian apparitions to Richeldis de Faverches, a pious English noblewoman, in 1061 in the village of Walsingham in Norfolk, England. Lady Richeldis had a structure built named "The Holy House" in Walsingham which later became a shrine and place of pilgrimage.

In passing on his guardianship of the Holy House, Richeldis's son Geoffrey left instructions for the building of a priory in Walsingham. The priory passed into the care of the Canons Regular of St. Augustine, sometime between 1146 and 1174.

Pope Pius XII granted a canonical coronation to the Roman Catholic image via the Papal Nuncio, Bishop Gerald O'Hara, on 15 August 1954 with a gold crown funded by her female devotees, now venerated in the Basilica of Our Lady of Walsingham.[1] Icon of Our Lady of Walsingham by iconographer Olga Shalamova

According to the tradition, in a Marian apparition to Lady Richeldis, the Blessed Virgin Mary fetched Richeldis’ soul from England to Nazareth during a religious ecstasy to show the house where the Holy Family once lived and in which the Annunciation of Archangel Gabriel occurred. Richeldis was given the task of building a replica house in her village, in England. The building came to be known as the "Holy House", and later became both a shrine and a focus of pilgrimage to Walsingham.

The modern wooden image was carved in Oberammergau, Germany, and was once associated with the Virgin of Mercy under the venerated Marian title of Our Lady of Ransom, sometimes locally worded as "Our Lady of the Dowry". The popularity of the Marian cult gradually localized the place of devotion as "Our Lady of Walsingham".

The historian J. C. Dickinson argues that the chapel was founded in the time of Edward the Confessor, about 1053, the earliest deeds naming Richeldis, the mother of Geoffrey of Favraches, as the founder. Dickinson claims that in 1169, Geoffrey granted "to God and St Mary and to Edwy his clerk the chapel of our Lady" which his mother had founded at Walsingham with the intention that Edwy should found a priory. These gifts were, shortly afterwards, confirmed to the Augustinian Canons of Walsingham by Robert de Brucurt and Roger, Earl of Clare.[5]

However, historian Bill Flint (2015) has disputed the foundation date established by Dickinson, arguing that the 1161 Norfolk Roll refers to the foundation of the priory only and not the shrine. Flint supports the earlier date of 1061 given in the Pynson Ballad and claims that in this year, Queen Edith the Fair, Lady of the Manor, was the likely Walsingham visionary.

By the time of its destruction in 1538 during the reign of Henry VIII, the shrine had become one of the greatest religious centres in England and Europe, together with Glastonbury and Canterbury. It had been a place of pilgrimage during medieval times, when due to wars and political upheaval, travel to Rome and Santiago de Compostela was tedious and difficult.[6]

Nevertheless, royal patronage helped the shrine to grow both in wealth and popularity, receiving regal visits from the following kings and queen:

"When you look in you would say it is the abode of saints, so brilliantly does it shine with gems, gold and silver ... Our Lady stands in the dark at the right side of the altar ... a little image, remarkable neither for its size, material or workmanship."[8]

It was also a place of pilgrimage for Queen Catherine of Aragon who was a regular pilgrim. Likewise, Anne Boleyn also publicly announced an intention of making a pilgrimage but it never occurred. Its wealth and prestige did not, however, prevent its being a disorderly house. The visitation of Bishop Nicke in 1514 revealed that the prior was leading a scandalous life and that, among many other things, he treated the canons with insolence and brutality; the canons themselves frequented taverns and were quarrelsome. The prior, William Lowth, was removed and by 1526 some decent order had been restored. 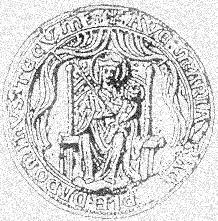 Ancient seal of the Medieval priory, with the Annunciation text surrounding "Ave Maria Gratia Plena Dominus Tecum" on which the present image from Oberammergau was carved

The suppression of the monasteries was part of the English Reformation. On the pretext of discovering any irregularities in their life, Thomas Cromwell organised a series of visitations, the results of which led to the suppression of smaller foundations (which did not include Walsingham) in 1536. Six years earlier the prior, Richard Vowell, had signed their acceptance of the king's supremacy, but it did not save them. Cromwell's actions were politically motivated, but the canons, who had a number of houses in Norfolk, were not noted for their piety or good order.[9] The prior was evidently compliant but not all of the community felt likewise. In 1537, two lay choristers organised "the most serious plot hatched anywhere south of the Trent",[10] intended to resist what they feared, rightly as it turned out, would happen to their foundation. Eleven men were executed as a result. The sub-prior, Nicholas Milcham, was charged with conspiring to rebel against the suppression of the lesser monasteries, and on flimsy evidence was convicted of high treason and hanged outside the priory walls.[7]

The suppression of the Walsingham priory came late in 1538, under the supervision of Sir Roger Townshend, a local landowner. Walsingham was famous and its fall symbolic.

The priory buildings were looted and largely destroyed, but the memory of it was less easy to eradicate. Sir Roger wrote to Cromwell in 1564 that a woman of nearby Wells (now called Wells-Next-The-Sea) had declared that a miracle had been done by the statue after it had been carried away to London. He had the woman put in the stocks on market day to be abused by the village folk but concluded "I cannot perceyve but the seyd image is not yett out of the sum of ther heddes."[5]

The site of the priory with the churchyard and gardens was granted by the Crown to Thomas Sydney. All that remained of it was the gatehouse, the chancel arch and a few outbuildings. The Elizabethan ballad, "A Lament for Walsingham", expresses something of what the Norfolk people felt at the loss of their shrine of Our Lady of Walsingham.[7]

Fate of the statue

John Hussey wrote to Lord Lisle in 1538: "July 18th: This day our late Lady of Walsingham was brought to Lambhithe (Lambeth) where was both my Lord Chancellor and my Lord Privy Seal, with many virtuous prelates, but there was offered neither oblation nor candle : what shall become of her is not determined." The image is said to have been burned with images from other shrines at some point, publicly, in London. [11] Two chroniclers, Hall and Speed, suggest that the actual burning did not take place until September.

Although Hussey claimed to have witnessed the removal of the image (statue) of Our Lady of Walsingham to London, there is no extant eyewitness account of its destruction. Whilst there are claims that the image was destroyed, these do not agree on the location or date of destruction. There have been persistent suggestions that the image may in fact have been rescued and hidden by parties loyal to the tradition of veneration. On 23 December 1925 a medieval madonna and child statue, named the Langham Madonna, was purchased by the Victoria and Albert Museum. As early as 1931 the leading anglo-papalist clergyman Henry Joy Fynes-Clinton suggested that the Langham Madonna could be the original image from Walsingham.[12] The remaining parts (it is incomplete) bear a striking resemblance to the image's depiction on the medieval Walsingham Priory seal. In 2019 English art historians Michael Rear and Francis Young, having studied the provenance, form, and damage to the Langham Madonna, published their conclusions (originally through the Catholic Herald) that it is actually the original statue of Our Lady of Walsingham.[12][13] Our Lady of Walsingham shrine at the Episcopal Church of the Good Shepherd (Rosemont, Pennsylvania)

After nearly four hundred years the 20th century saw the restoration of pilgrimage to Walsingham as a regular feature of Christian life in the British Isles and beyond. There are major Catholic and Anglican shrines in Walsingham, as well as a smaller Orthodox one.

In 1340, the Slipper Chapel was built at Houghton St Giles, a mile outside Walsingham. This was the final "station" chapel on the way to Walsingham. It was here that pilgrims would remove their shoes to walk the final "Holy Mile" to the shrine barefoot.[8] Hence the designation ‘Slipper’ Chapel.

In 1896, Charlotte Pearson Boyd purchased the 14th-century Slipper Chapel, which had seen centuries of secular use, and set about its restoration.[14]

In 1897, Pope Leo XIII re-established the restored 14th-century Slipper Chapel as a Catholic shrine, now the centre of the National Shrine of Our Lady of Walsingham.[15] The Holy House had been rebuilt at the Church of the Annunciation at King's Lynn (Walsingham was part of this Catholic parish in 1897).

As the number of pilgrims to the site increased, a new chapel was dedicated in 1931 and the statue was moved to it in an elaborate translation procession on 15 October 1931. The chapel was extended in 1938 to form the current Anglican shrine church.[16]

The Scapular of Our Lady of Walsingham.

Banner depicting Our Lady of Walsingham.

There is frequently an ecumenical dimension to pilgrimages to Walsingham, with many pilgrims arriving at the Slipper Chapel and then walking to the Holy House at the Anglican shrine. Student Cross is the longest continuous walking pilgrimage in Britain to Walsingham which takes place over Holy Week and Easter.

Wikimedia Commons has media related to Our Lady of Walsingham.
Apparitions approved by the Catholic Church
Categories
Categories: