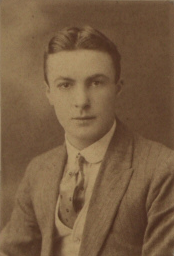 After serving with the North Borneo Civil Service from 1910 to 1915, Rutter returned to Britain during World War I and was commissioned.[1] Rutter served with the 7th Battalion of the Wiltshire Regiment in France and on the Salonika front. He edited the Balkan News which included, under the pseudonym "Klip-Klip", his parody of Henry Wadsworth Longfellow's The Song of Hiawatha in serial form. Entitled Song of Tiadatha it has been described as "one of the masterpieces of Great War verse".[2] Later published as a book, Tiadatha ("Tired Arthur") was the story of a naive, privileged young man who matures through his war experiences, particularly on the Macedonian front fighting against the Bulgarians, and including the Great Thessaloniki Fire of 1917. This volume was followed by Travels of Tiadatha (1922).

Accompanied by his wife, who also took many of the photographs for his books, Rutter travelled around the globe, making extended stops in Borneo, Hong Kong, Taiwan (then known as Formosa), Japan, Canada and the United States among other places.

His many books included The Scales of Karma (1940), Pirate Wind (1930), Triumphant Pilgrimage: An English Muslim's Journey from Sarawak to Mecca (1937), Pagans of North Borneo (1929), and Through Formosa: An Account of Japan's Island Colony (1923). He was also the author of works on Captain William Bligh and the Mutiny on the Bounty. His novel Lucky Star was filmed as Once in a New Moon in 1935. Triumphant Pilgrimage was an account of "David Chale", a pseudonym for Gerard MacBryan.[3]

From 1933, he was a partner in the Golden Cockerel Press. During World War II Major Rutter worked for the Ministry of Information writing a number of booklets covering the British war effort.

He was fellow of the Royal Geographical Society and of the Royal Anthropological Institute. Rutter was a member of the Athenaeum Club, London.